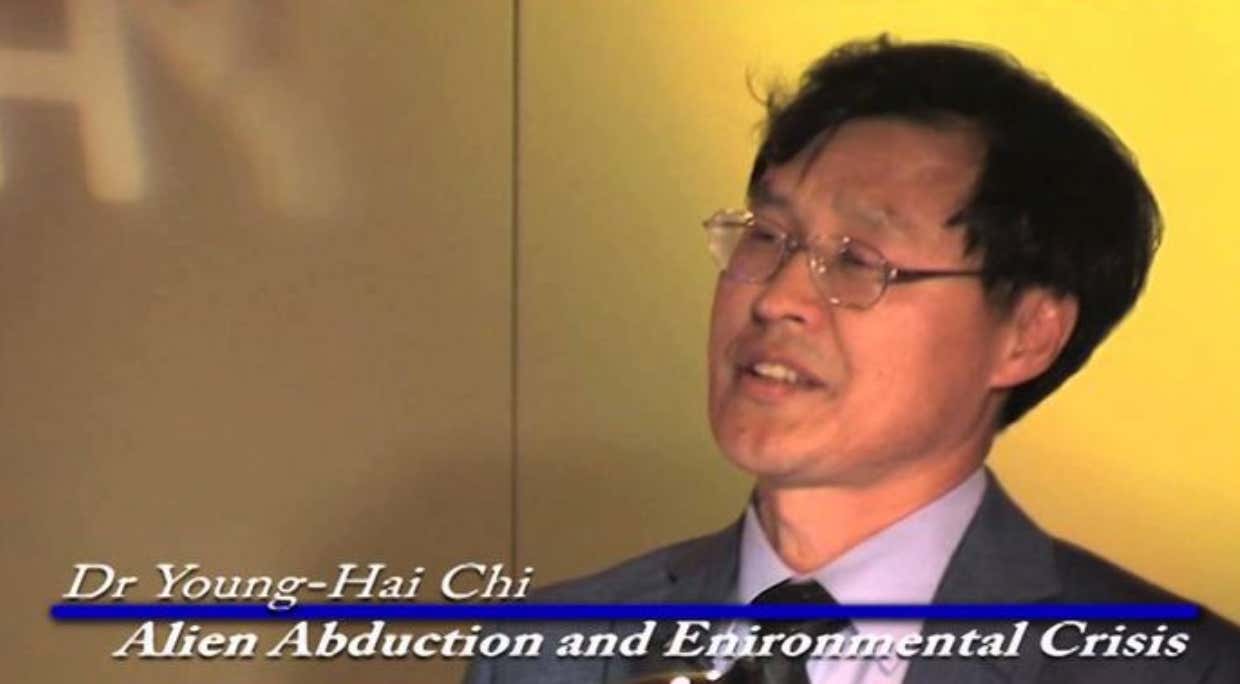 The man above is Dr. Young-Hai Chi of Oxford University. Having a doctorate and being a professor at one of the best universities in the world means one thing: you’re one smart guy. You know what smart guys are? Crazy. And Dr. Young-Hai Chi has some crazy ideas:

In 2012, Dr Chi gave a lecture at the the Ammach Conference, titled ‘Alien Abduction and the Environmental Crisis’ in which he outlined his theory concerning the presence of aliens on earth.

Dr Chi began his lecture with the statement that “perhaps human civilisation is coming to an end”.

In his fifty-five minute presentation he cited Dr David Jacobs, an ‘abduction researcher’ in the US, who argued that aliens’ primary purpose is to colonise the earth, by interbreeding with humans to produce a new hybrid species. Second generation ‘hybrids’ are, according to Jacobs, walking unobserved among us.

These are the type of theories that I read as a man with a normal intellect and may not believe but cannot intellectually deny. What, am I going to tell Dr. David Jacobs or Dr. Young-Hai Chi that they are wrong? With what knowledge? They have a “Dr.” in front of their name. What do I have? “Intern?” They’d just laugh at me and tell the aliens to kill me.

Dr Chi believes that there are four types of aliens: small; tall and bold;  aliens with scales and snake eyes; and finally, insect-like aliens. The latter of these seems to be the highest in the hierarchy, he said, and gives orders to the lower ranks.

According to Dr Chi’s theory, the fact that aliens and humans share the same biosphere means that climate change bears a negative impact on them, thus accounting for their increased interference in human affairs.

Oh, so they are breeding with us to save the earth?!?!?

Dr Chi went on to outline his three hypotheses as to why aliens may want to produce hybrids with humans. He stated, “One possibility is that they find our DNA valuable for the preservation of the stock. Secondly, to create species which can survive in the future climate conditions…Thirdly, some abductees report that these hybrids are of a very high intelligence, so are they producing these hybrids as a problem-solver, a future leader?”

When asked whether he holds a pessimistic view of the future, Dr Chi expressed concern that there is a lack of political will to prevent climate change even if we have the necessary technology. He said, “Judging from the way the ETs are acting they have a better view of our future, perhaps it is pointing to a pessimistic future”.

I’m a big conspiracy guy. I love watching shitty YouTube documentaries on the most random conspiracies ever conceived. It’s probably not great for my brain, but I find them entertaining and I’m only alive for so long, so who cares. Based on that interest of mine, you may assume I like alien content. I don’t. I could never get into the alien side of things. Don’t get me wrong, I respect the hell out of aliens. If they come down to earth and take over, I want to be on their side. However, until that time, I’m just not in on them. It’s too confusing, but it’s good that people like Dr. Young-Hai Choi exist who can make sure they are on top of all of the alien content out there. Don’t need these guys coming down and taking over without us preparing.