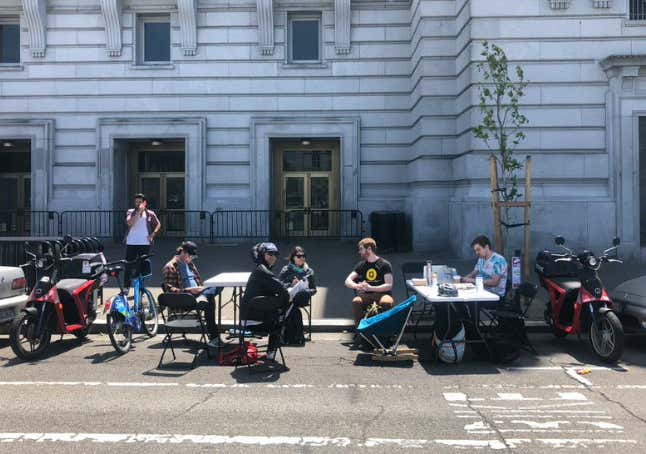 I’ve officially taken the reigns as the San Francisco is shit (literally) blogger for Barstool Sports. I wasn’t told to do so, but instead, I have elected myself it. If you want to make it in this business, you’ve gotta take it by the balls.

The latest in the utopia that is San Francisco is a protest that has workers taking their talents not to Silicon Valley, but parking spaces:

SOURCE-App developer Victor Pontis, 26, pioneered the concept of working from a parking space on April 25, setting up his desk in a parking spot at 16th Street and Market and feeding the meter.

The stunt, which he said in tweet was to ‘show that parking real estate can be used for better purposes’, quickly garnered so much interest from other fed-up freelancers that Pontis organized a group event in parking spaces by the Civic Center on Monday.

With membership in co-working spaces like WeWork running upward of $400 a month, Pontis coined a cheeky alternative: ‘WePark’, which encourages workers to set up a desk in a parking spot and feed the meter for about $2.25 an hour.

For those not following, I’m going to put it into San Francisco terms: It’s Uber, but for working in a parking space when you are in the most expensive city in the world that is covered in shit.

In other San Francisco news, it is reported that $70 million in tax dollars will go towards cleaning up poop:

In a weird way, all the poop on the streets is creating jobs. I guess that’s why unemployment is at record lows.