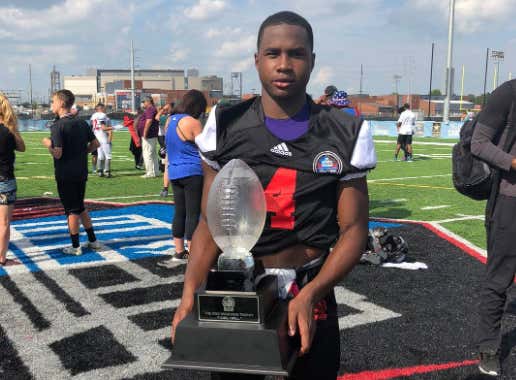 This past weekend tragedy struck in St. Louis:

SOURCE-Jaylon McKenzie had plans of going to the NFL.

The 14-year-old from Belleville, Illinois, was an eighth-grader who already had college offers from University of Missouri and University of Illinois. He was featured in the Future Issue of Sports Illustrated in November 2018 along with five other teen sports stars. He wanted to be a pro star in California, playing for either the Los Angeles Rams or Chargers.

Those dreams died late Saturday when Jaylon was shot and killed at a party, his mother, Sukeena Gunner, told CNN.
Around 11:40 p.m. Saturday night, Illinois State Police said in a release, numerous law enforcement agencies responded to reports of a disturbance and shots fired at a large party in Venice, near the Illinois-Missouri border.
Jaylon had been at that party when a fight broke out, Gunner said. Jaylon walked outside to leave the party, and a stray bullet hit him. He and a 15-year-old girl were taken to a hospital where Jaylon died a short time after, police said. The girl is in critical condition, police said.

Just absolutely brutal. Jaylon McKenzie was on path to play top tier college football and that was stripped away from him due to a stray bullet hit him.
Ezekiel Elliot, who is from St. Louis like McKenzie, heard about the tragedy and has reached out to McKenzie’s family to let them know he will pay for the funeral:

SOURCE-“For him to reach out to me was unbelievable,” McKenzie’s mother, Sukeena Gunner, told the Star-Telegram. “Jaylen loved Ezekiel Elliott. He talked about him all the time. When Ezekiel was playing, he would sit in front of the TV. His eyes were glued to the TV, watching him. Just for him to reach out to me and help me in this difficult time leaves me speechless.”

Ezekiel has certainly has not had the greatest career off the field, but this is a hell of an act from him. Awesome to see a guy grow off the field as much as he is growing on it.

P.s. I searched for any donations the family was asking of the public, but couldn’t find any. If you do know of anything like that, please let me know so I can add it to this blog.