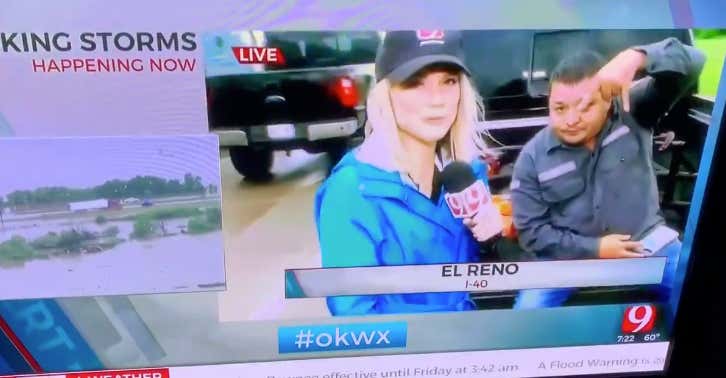 As you may have heard, the world looked to be ending in Oklahoma yesterday. Schools were canceled due to a tornado warning, which is something that apparently never happens in Oklahoma. Usually they look at a tornado warning and laugh. This time, though, it was serious. They had to keep the kids home.

The tornadoes were no joke:

After the tornado warnings ended, flash floods started. Thousands were stranded on I-40, including this man, who is about as Oklahoma as you can get:

Ranking of my favorite moments.

4) His face when he said “didn’t work” about his attempt to drive up the shoulder of the road.

3) Just sitting on the back of his truck, eating pork rinds.

2) Just how relaxed he was. He wasn’t defeated as much as he just accepted that he wasn’t going to move. “Hang out. May take a nap for a little bit.”

A perfectly executed horns down. Wasn’t even expecting it.