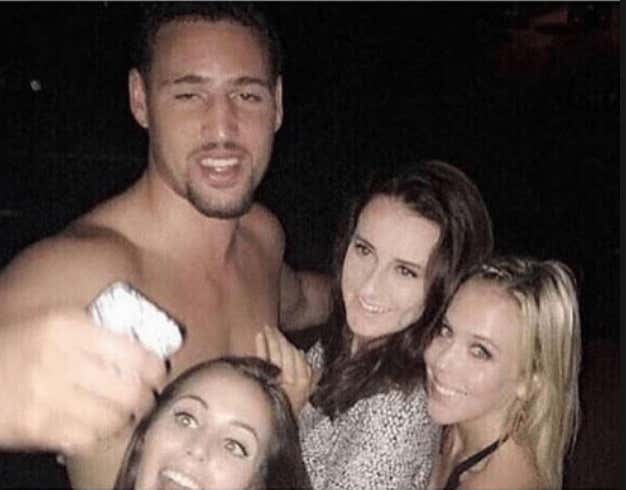 Today, I hopped on Barstool Radio to let loose what I believe is my hottest take:

Now, I understand this is a take that certainly needs to be backed up. That’s why I’m writing this. I may have went a bit overboard with the take. He may not be the most overrated player in NBA history, but instead currently the most overrated player in the NBA. There’s a sentiment that Klay Thompson is one of the best players in the NBA. After he didn’t make the All-NBA team this year, Twitter acted like an asteroid just hit earth. There’s also an assumption that Klay is a lock for the HOF. If the basketball hall of fame didn’t induct every person that’s dribbled a basketball for more than 3-years into the hall of fame, I don’t think Klay should be anywhere close.

Klay is the 5th best player in this Warriors dynasty behind Steph, KD, Draymond, and Igoudola (one of the most underrated players in NBA history).

The Warriors are a below average team when it’s just Klay on the court in 2019:

You may notice I’m using a lot of stats to back up this claim. That may anger you for whatever reason. You swear because of what you see with your trained basketball eye (which couldn’t get off the JV team in high school) that Klay is an amazing player. That’s fine. Honestly, that means you should like these statistics more. Stats are derived from the on-court performance you watch every game. One statistic doesn’t tell an entire story though. That’s why in this next segment, I will use 4 separate advanced statistics. These statistics are used by NBA front offices across the league.

Since 2016-17, here is Klay Thompson ranked among all NBA players by season:

Win Shares (a player statistic which attempts to divvy up credit for team success to the individuals on the team): 39th, 80th, 74th

Hollinger’s PER (player efficiency rating (PER) is a rating of a player’s per-minute productivity): 74th, 108th, 87th.

You may notice I haven’t put his 3-point shooting stats. That’s what makes him an above-average NBA player. He’s almost a knockdown shooter behind the three-point line. Why do I say “almost?” Well, did you know that Klay ranked 17th in the NBA this year in 3P%. You now may say “well, he takes more than everyone else!” That is also not true. For example, Buddy Hield shot 2.5% better than Klay this year from 3, on 0.2 more shots per game. Unless I’m missing something, Buddy Hield also doesn’t have KD, Steph, and Draymond on his team.

What about defense? Isn’t Klay one of the best defenders in the league? I disagree with that notion as well.

Since 2016-17, Klay Thompson ranked among all NBA players per season:

Defensive advanced analytics are not perfect, but I do think they are good enough at this point that they do tell a decent story of the value of an NBA player on defense.

This may be the point where I’m told by an anti-analytics reader that you can find any statistic to back up your claim. That’s why I included 6 separate ones. Also, if you believe I hand picked these statistics, I challenge you to find ones that back up that he is a better overall player than what I’m suggesting.

Also, on radio, I said there are 50 players better than Klay. Before I left, Big Cat said it was okay for me to admit I was wrong.

This is the point where I say I was wrong. There aren’t 50 players better than Klay, just 40.

Here’s what I’ve got in no particular order:

Now, don’t get me wrong, I don’t hate Klay Thompson. He is a great guy who is one of the best basketball players in the world. I respect his success, but his hype train is out of control. If he’s smart, he’ll stay with the Warriors or go and play with LeBron. Stay out of the spotlight as the number one guy, because he’s so far from being that.