I take pride in how much I can eat/how fast I can eat it. That’s probably a form of toxic masculinity, but honestly, I could care less. That’s why when I stumbled upon Leah Shutkever, I felt attacked.

SOURCE-A competitive eater has described how she ignores all her senses and enters a ‘trance’ in order to scoff down 3,000 calories in less than a minute.

Leah Shutkever, 29, from Birmingham, is a fitness addict and competitive eater who is among the best in the UK.

Among her achievements include eating a Domino’s pizza in under a minute and a chocolate orange in under 50 seconds.

The gym bunny says when she competes in a food challenge, her ‘brain is mush’ and she tries to eliminate all of her senses so she doesn’t get distracted. She also ‘crushes’ mouthfuls so she can effectively take two bites at once.

I, mean, my brain is mush too, but that doesn’t allow me to have a talent like eating 3000 calories in less than a minute. 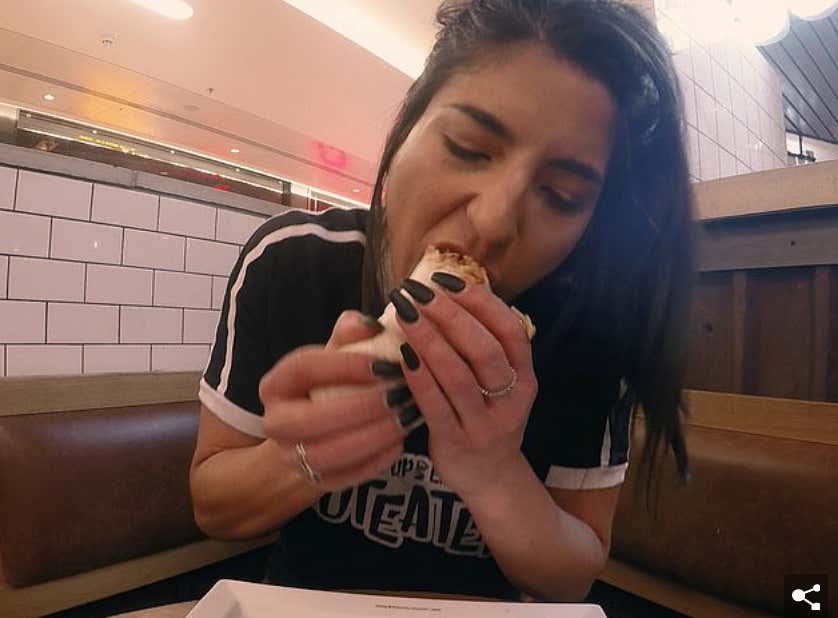 Here she is eating a burrito in 44 seconds.

She revealed she has a specific technique in order to scoff down food quickly, explaining: ‘If I crush and take one bit, I’m able to swallow and take another bite at the same time.’

She applies the technique broadly across all kinds of foods, and competes in speed eating challenges as well as quantity.

This is the beauty of the internet. If you have a talent and you market yourself properly, you will make money. Now, is Leah profiting off of people who have weird food fetishes? Most likely yes, but who cares? As they say, If the checks keep cashing, everyone is going to be alright!

Explaining her technique, she says: ‘Eighty per cent of competitive eating is psychological. I breathe deep breaths, I see the finish line, and then I just go.’

‘When I do a food challenge, my brain is mush. I don’t breathe, I can’t smell, I don’t taste. The minute you look, sense or smell you overthink everything.’

She added: ‘It just takes that one minute of sheer pressure concentration, nothing else in the head and then it’s over.’

One of the most confounding parts of competitive eating to me is the best eaters are the ones who are actually in shape. Wouldn’t you think the 450-pound guy would be better than Leah? Of course, you would, but the human body works in curious ways.