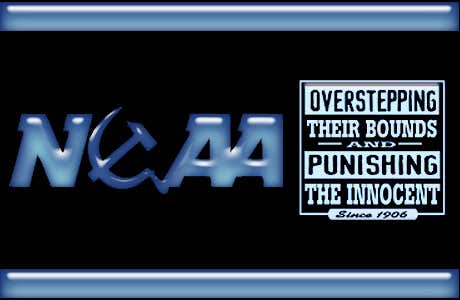 There was a time a month ago where I felt that the NCAA was making progress.

Anddddddddddd then it was gone:

There’s a great scene in Godfather III, where Michael Corleone says his iconic line “just when I thought I was out, they pullllll me back in!”

This is what the NCAA does time and time again. Just when I thought I was out, they pull me back in:

SOURCE-The council is scheduled to meet Wednesday in Indianapolis to review the updated guidelines and directives, which in many cases appear to specify and narrow the circumstances in which athletes should be given waivers and raise the documentation requirements to obtain them. Compliance staffs at Division I schools were made aware of the proposals last week.

The biggest issue the NCAA has to fix at the moment is allowing their student-athletes to profit off their image and likeness. Next up in line is fixing the transfer issue. It’s pretty simple. If a player doesn’t like where he is, he should be able to leave. If there are better opportunities for him or her, there should be zero issues in them gaining eligibility after a transfer. This is how it works for coaches and non-student-athletes across the country. Why should it be different for a 19-year-old?

In 2018, the NCAA implemented a new policy that would allow waivers to be granted on a case-by-case basis by the committee if the athlete could demonstrate “documented mitigating circumstances outside of the student-athlete’s control and directly impacts the health, safety or well-being of the student-athlete.”

I have no idea what “extenuating, extraordinary” means considering there were instances like these in 2019 that did not result in a waiver being granted:

Wanting to be closer to your sick grandfather that had a massive role in your football career? Not extraordinary.

A brain tumor? Not extraordinary.

There’s no consistency in these decisions. That’s why they should just tear it down and start giving the rights to student-athletes that every other student in America. There’d be no controversy.

Also, I have yet to be told why it’s okay for a coach to not have to sit out a year of “eligibility.” Why not? Because they are paid?

I love college football. I love college basketball. It just stinks seeing them ruined by these rules that make very little sense.