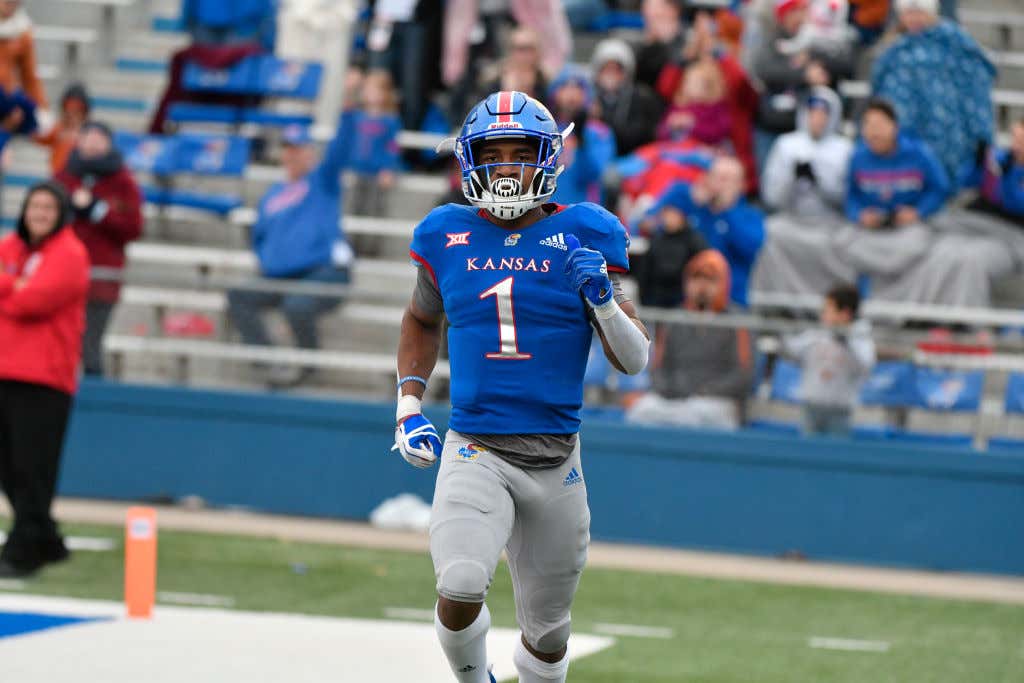 Pooka Williams was a bright spot for Kansas last year. The 3-9 Jayhawks fired David Beaty in November, but at least Pooka Williams finished up his season as his the offensive freshman of the year.

Unfortunately, Pooka ran into an issue this offseason. He was suspended indefinitely in December after a domestic violence arrest.

On Monday, Les Miles announced that Pooka would be reinstated, but suspended for the first game of the season.

SOURCE-Williams, who served a seven-month suspension, will not play in Week 1 against Indiana State, but is eligible to return to the field against Coastal Carolina on Sept. 7.

According to the Kansas City Star, Williams signed a 12-month diversion agreement in March in an effort to have his misdemeanor battery charge dropped. As part of the agreement, Williams must undergo a domestic violence offender assessment, attend an anger management course, refrain from using drugs and alcohol and have no contact with the victim, who said Williams pushed her, punched her and grabbed her by the throat in an altercation.

Punching and grabbing a woman by the throat? Disgusting. A one-game suspension for that? Also, not great. I’d point out that the one game is against an FCS team, but this is Kansas we are talking about so it’s a very real game for them.

Brenda Tracy, known for her work throughout the college football community in educating players on sexual assault, voiced her displeasure:

At least he didn’t leave this one up to a vote like he did at LSU?

Miles had suspended Williams for the last seven months. Miles has a history of being soft when it comes to punishing his players. In 2013, Miles let the team vote on whether Jeremy Hill should be reinstated to the team after he was spared jail time for punching a man outside of a Baton Rouge bar. LSU’s starting running back was already on probation for a guilty plea in 2012 to a misdemeanor for a sexual relationship he had with a then-14-year-old girl when he was a student at Redemptorist High School.

“He owes this team, this school, this community his best behavior,” Miles said in 2013 about reinstating Hill. “He will have further punishment. It will be internal. It will be comprehensive. We will see the whole person.”

Les taking his SEC mentality to Kansas may help on the field, but off the field, it may cause negative PR.

It appears Miles had a chance to send a message here. He may have sent the wrong one.