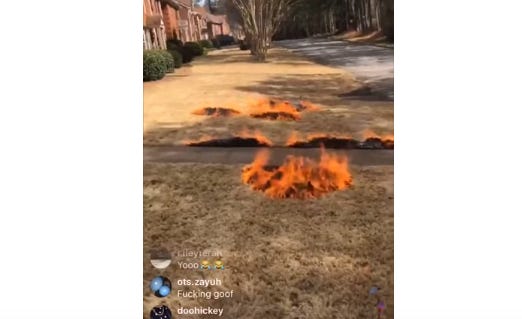 One of my favorite redneck jokes out there is "you might be a redneck if you have ever cut your grass by lighting it on fire." It's always made me laugh. I've got to be honest, I never thought it occurred. No way a sane human being would light their grass on fire to cut it. It turns out that it does happen and, unfortunately, it doesn't work:

SOURCE-A man using a blowtorch to clear weeds in a mobile home community accidentally started a fire that forced dozens of residents to temporarily evacuate. The blaze began Wednesday around 5:15pm in Green Oak Township, Michigan, about 50 miles from Detroit. According to Fire Chief Kevin Gentry, the fire began in a shed, but when firefighters arrived just a minute later, it had already spread to one trailer, and then another. In all three units were damaged.

I'm not necessarily pro-regulation from the government, but I've gotta say, a blowtorch in a trailer park is bad news. May need to ban that from ever occurring again.

If you were wondering what occurs when you do light fire to grass, rapper Thouxanbanfauni gave us an example:

It appears for it to work, you need to have dead, dry grass, which I'm sure was the case inside this trailer park in Michigan.