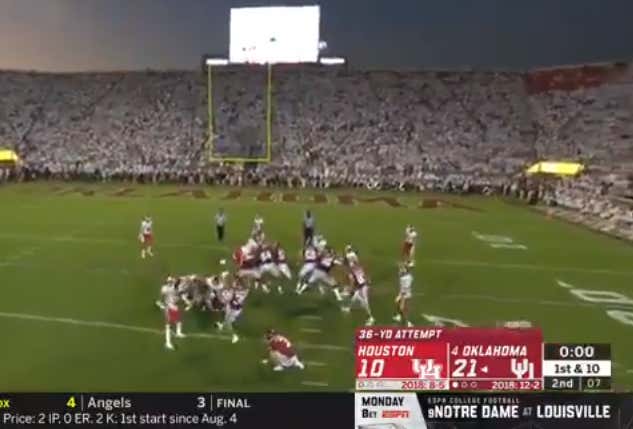 The Jalen Hurts experience at Oklahoma started off hot. It took him only 70 seconds to score his first TD as an Oklahoma Sooner.

Unfortunately, Oklahoma ended up entering Houston territory twice without scoring any points. A missed 49-yard field goal and a Jalen Hurts fumble helped that happen. Down 21-10 with 0:24 left in the 1st half, Oklahoma -13.5 1st half bettors weren’t feeling hot. However, Oklahoma’s fast-paced offense led them down the field to set up a short field goal. I’m sure you can predict what happened:

That’s at least 9 points left on the board by Oklahoma thanks to 3 posessions heading into Houston territory ending with zero points scored.

Why’d you do that, Oklahoma? Kneeing out the clock would’ve been better for those who took the Sooners 1st half. Why troll?