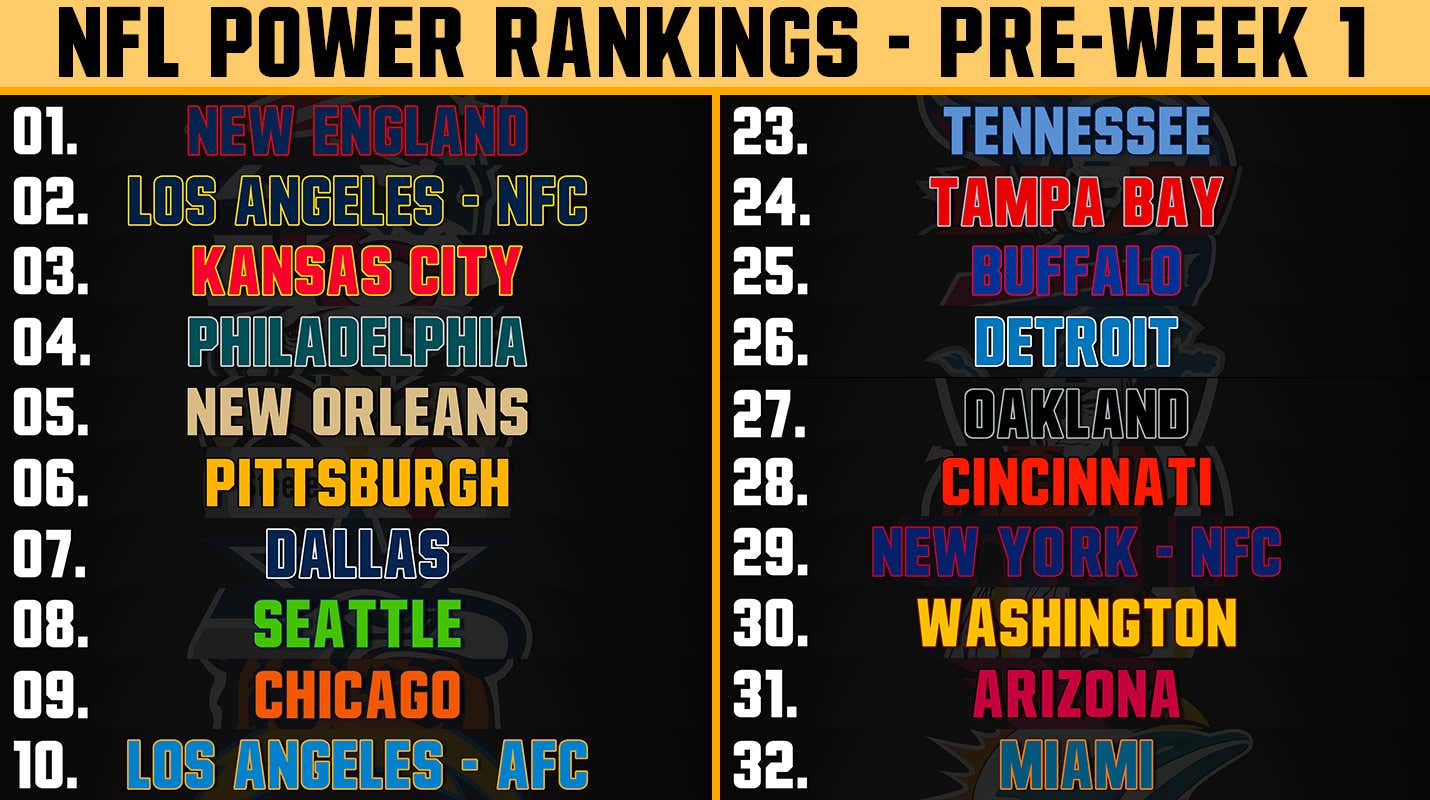 THE NFL IS BACK.

This year, I will be teaming up with the guys from the Surf & Turf (Barstool’s NFL Podcast), Steve Cheah (fan of the one-time Super Bowl Champion Tampa Bay Buccaneers) and Willie Colon (Super Bowl Champion and star of ‘The Dark Knight Rises’ … I think? I think he was in it…). Make sure to listen to the podcast right here…

We all submitted our Top 32 and averaged everything out.

As always, remember to take these rankings personally…

The Dolphins are not just bad, but they’re also trying to be bad. The number-one tanking team coming into the season seems like a safe bet to win no more than four games. I will say that, PFT Commenter seems to think Ryan Fitzpatrick might muster up a few more wins than expected.

Arizona’s ranking is irrelevant this season because watching Kyler Murray is all that matters. In terms of excitement, the Cardinals are on the opposite end of the spectrum.

I personally want to see Dwayne Haskins play, but it would seem that won’t happen for a little while. Washington is a team I could see disrupting some seasons, but I’ll be surprised if they end up outside of the bottom-third of the league.

I am a little higher on Daniel Jones’ future team than Willie and Cheah, it seems. The reasoning? Saquon Barkley. It just makes too much sense to me that the Giants won’t be completely in the basement this season.

A.J. Green’s uncertain status for the season is the biggest problem with the Bengals right now. Who the fuck even knows how long Andy Dalton will be around. In a terrible division, I could see the Bengals squeaking some wins out, but the AFC North is going to prove to be too much for them in 2019.

Finishing this low in the standings would be not ideal for the Lions, right? They bolstered their defense, including their line with Trey Flowers and Mike Daniels as Matt Stafford, plays his first season north for 30 years old. Willie and I are a little higher on the Lions than our friend Mr. Cheah, who thinks they’re one of the worst teams in the league.

Buffalo is a big-time sleeper pick this year, right? I have this hunch that Josh Allen might take a huge leap this season. Sure, there’s a chance they’re terrible, but we saw the Bills beats some decent teams last year. I could see Buffalo in the two-slot in the AFC East.

Another weird team is for sure Tennessee. Without Taylor Lewan for the first four games, the Titans, as we’ve seen before, have the talent to contend with and beat the league’s best teams with the likes of Mariota (when he is good) and Derrick Henry. So much of their season hangs on the Taylor Lewan-less start.

This is just weird to look at…

Steve Cheah actually has the Broncos finishing above the Chargers this season.

The soon-to-be only team by the Bay did a lot to improve their team in the offseason, especially the defense. Will Jimmy G. stay healthy? This is a low spot for a team that some people think might make some noise this season. With the addition of Tevin Coleman, the 49ers might be able to pull off making some people, including me, look fairly dumb.

The Jets are either going to be pushing for a Wild Card spot an absolute fucking disaster. It all comes down to Sam Darnold…

I would love to see Nick Foles have a solid (eventual) end to his career now that he has moved on again from the Eagles. Is he just a product of a stout Doug Pederson system in Philadelphia? Not sure, but if he is solid, the Jaguars have plenty of talent to surprise people this season.

You know, I could totally see Jacoby Brissett carrying the Colts to the playoffs. This was a Top 10 team in my opinion before Andrew Luck hung up the cleats. They’re loaded in some many areas and if Brissett can be above average, they’ll be good. Can he do it, though…

What the fuck, Steve Cheah? I really don’t like the Ravens on account of the fact I am a Browns fan, but his ranking of them is insanity. They may have lost a fair amount on defense, but the Ravens still have arguably the best secondary in the NFL. The obvious thing is this, though: will Lamar Jackson take the next step? The Browns gave a small blueprint on him in the final quarter of Week 17 and then the Chargers exposed him in the playoffs. The Ravens will go only as far as Lamar can take them in 2019.

Cam Newton battled injuries last season and is already doing so entering Week 1. Will he get to full strength at any point? With an on-point Cam Newton and Christian McCaffrey, there would be little doubt that the Panthers can push the Saints and Falcons in the NFC South.

Man, there is a lot of fucking talent on this team. Kirk Cousins was nowhere near bad last year, despite the popular sentiment, but he has to start winning the games you’d expect him to win when factoring in how much the Vikings are paying him.

Addressing their offensive line issues was a big move, but it is hard to look past the Texans losing both Lamar Miller and Jadeveon Clowney. Still, DeShaun Watson is going to have this team in the thick of the hunt for the playoffs. I don’t know how much I trust Carlos Hyde, but Duke Johnson Jr. finally has a chance to show people why he believes he is a number-one running back.

I think the Browns have a ceiling and floor that are very similar. Personally, I can’t see them winning more than 11 games or less than nine games. The funny thing is, despite a small difference, one would be considered a success and the other considered a failure. This slot seems a bit high for them, but the talent is there to compete right away.

Will Atlanta find their way in 2019? The Falcons were decent the year after their Super Bowl collapse, but really struggled last season and finished below .500. Tevin Coleman is gone, but the Falcons offense has a ton of potential this season. The NFC South might be the best division in the NFL, but the Falcons, even though I am a little lower on them than Willie and Cheah, might have a shot at winning it.

I think the Packers will be good this year, but let’s focus on tonight.

Even with the absence of Melvin Gordon and Derwin James, this is a Top 10 team and I scoff at Steve Cheah’s ranking.

I love the Bears this season. Trubisky is a guy I believe in, so picking the Bears to take the NFC North is an easy one for me. So long as this team can make a field goal, they should be in contention for the Super Bowl right from the get-go.

There are some injuries and concerns with the Seahawks at the wide receiver position, but you have to just trust Russ at this point to get it done. It also goes without saying that the late addition is Jadeveon Clowney is a game-changer. While I have them second in the NFC West, there’s no doubt in my mind Seattle is neck-and-neck with the Rams in terms of ability to win the division.

This ranking would be wildly different had Zeke not just re-signed. But, nevertheless, he did, and the Cowboys might be in their best shape in quite some time. A full season of Amari Cooper, with a defense that I’m very high on, means we could see a very happy Jerry Jones for once at the end of the season.

The Saints are going to shoot out of a fucking cannon to start the season with their continued fire and anger over the no-call in the NFC Championship Game. We all agreed on the Saints at the number-four slot, but with the voting averages being so different in the top four, the Saints get bumped down to number five.

I had to get a little “different” with my playoff predictions by putting my number-two seed, the Saints, in the Super Bowl, but I do think the Eagles are the second-best team in the NFL. They’re fucking stacked from top to bottom (they have roughly between 10-20 running backs) and were close to the door-step of the Super Bowl again last season. A healthy Carson Wentz and this team is going to be tough to beat all season long.

The scales tipped in the direction of the Chiefs when they got the news about Tyreek Hill’s availability this season. It’s hard to imagine Mahomes repeating his MVP season from last year, but I wouldn’t be shocked to see him do it. The Chiefs scoring tons of points seems like a formality and it’ll all hinge on how good this defense looks.

It seems kind of lame, but the NFL’s runner-up from last season lands in our number-two spot. All eyes will be on Todd Gurley’s health, but Cooper Kupp’s return should do wonders for Jared Goff and Sean McVay. The Rams will win again, but can they avoid the Super Bowl loss hangover?

If you read my rankings last year, you know I refuse to do two things: doubt the Patriots and move the Super Bowl Champions out of the top slot. It would take probably an 0-8 start for me to bump the Patriots. No one is going to sleep on them this year and I am sure arguments could be made that this Patriots team has the potential to be better (at least in the regular season). Ranking them anything other than number-one is blasphemy.

—
There you have it. Remember to get angry and yell in the comment section.

For the hell of it, here are my predictions for the 2019 NFL Season…

Also, it is time for a shameless Browns plus… buy our shirt… anything with Baker has 100% of the net proceeds donated to the Special Olympics.

Welcome back NFL. It’s great to see you again.