I am SHOCKED that the Browns are bad.

But that's what they are. They're bad. Or at least they were today. They got beat every which way today by the gosh darn Tennessee Titans.And not only did we get beat, we got our butts kicked. 43-13!!!! And we looked undisciplined while doing so. Today's game did absolutely nothing to dispel the noise that Freddie Kitchens wasn't ready to be a head coach. We had 18 penalties for 182 yards. We jumped off-sides. We held. We extended drives. I mean, we even punched and kicked people.

Flat out embarrassing. And that's how I feel right now. Flat out embarrassed. I'm glad the fans booed them off the field. The amount of hype surrounding this team was so high that there was absolutely no way we could come out and put up this big of an egg. How do you turn the comments off on a blog? I don't want to hear it right now. I thought Browns football was going to be fun.

But this is not on me. This is not on the city of Cleveland. This is on the Browns. This is on Freddie Kitchens. This team was undisciplined and we got our ass kicked because of it. For the entire city to rally behind a team like we did leading up to this game, we deserved better. Tailgating started in the Muni Lot last night......for this? Freddie Kitchens should apologize to the city of Cleveland. He should have the players stay out on the field and run sprints in front of the fans. That would make me feel a little bit better. Heads better be rolling in that locker room. Maybe we should've played the starters a little more in the preseason? Because we looked flat out BAD today.

This is going to be a longgggg week to be a Browns fan. Everything that the haters said about us came to be true. And the Browns streak continues. We haven't won an opener in 15 years. 15 gosh darn years.

And Week 2 isn't going to be any easier. At New York on Monday Night Football. And I know the Jets aren't world beaters but you're not going to beat anyone with a million penalty yards in a game. And then we play the defending NFC Champion Rams and apparently the best team in the league, the Ravens.

How did we go from so high to so low in just 3 hours? I thought we were going 12-4. The team that played today doesn't even go 4-12. We need to clean our stuff up FAST.

**15-1 still makes the playoffs though 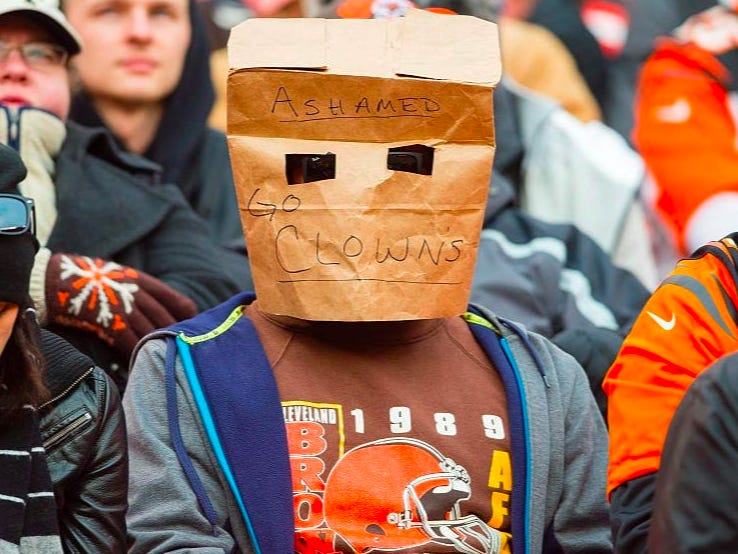