The Browns have something extra to play for tonight.

Cordero was a passenger in Smith’s Lamborghini when a tire blew out, causing their vehicle to swerve and hit a median on I-90 West in Cleveland, according to a statement from the Cleveland Browns.

Cordero got out of the car “without significant injuries,” only to be struck by an oncoming vehicle. After being taken to Cleveland Clinic Fairview Hospital, she was pronounced dead, local station News 5 reported.

The driver of the oncoming vehicle admitted to drinking before the accident, and a toxicology report is pending, Cleveland police told CNN. Smith was not impaired, both the Browns’ statement and CNN reported. (via CNN)

Just a few weeks prior, Cordero announced the birth of their newborn daughter.

It’s a tragic story and, obviously, insane that Chris Smith has the strength to even show up for the game, let alone play.

There’s no doubt the entire Browns team will be playing for the late Petara Cordero and Smith tonight in New Jersey.

Let’s take a look at the game…

The gambling community seems to be heavy on the Browns, which makes sense, but, as expected, there’s plenty of talk (especially in this office) about taking the Jets with that hefty line.

I think the Browns are going to win by a touchdown, so I have to make that my pick. The total is interesting because I do think there are enough injuries where even the Browns somehow win in a blowout, they won’t eclipse the total. I hate taking unders, but, here we are…

This matchup is actually packed with a ton of history. The first meeting between the Browns and the Jets came 49 years ago in the first-ever Monday Night Football game. Cleveland was victorious back then and is 14-12 all-time against the Jets, but they’re 4-6 since returning to the league in 1999.

I will throw a curveball here and take you back to my favorite Cleveland Browns season, 2002-2003.

The 21-6 comeback win in the Meadowlands was pivotal in the Browns march to the playoffs that season and it was a hell of a game. It was also the game that sparked this famous Herm Edwards press conference…

Here’s to hoping they find a way to do the winning thing again tonight.

For Cleveland, the impact injuries (assuming Rashard Higgins and Joel Bitonio play) are Damarious Randall, who is a top-three player on the defense for me, and Adarius Taylor, whose absence means rookie Mack Wilson gets his first career start. New York has some worse impact injuries starting with the obvious one, Sam Darnold, followed by free agent signing C.J. Mosley and rookie Quinnen Williams. I’d argue that the Mosley injury is a bigger problem for the Jets than the Darnold one and you just need to see the Jets’ blown lead last week to see why.

This could be an ugly game in a few areas.

UPDATE: Rashard Higgins is out, which is really bad news for the Browns. He’s Baker’s comfort blanket and the second-year QB’s play is always better with Higgins in the fold.

Key to victory for the offense: don’t commit 20 fucking penalties 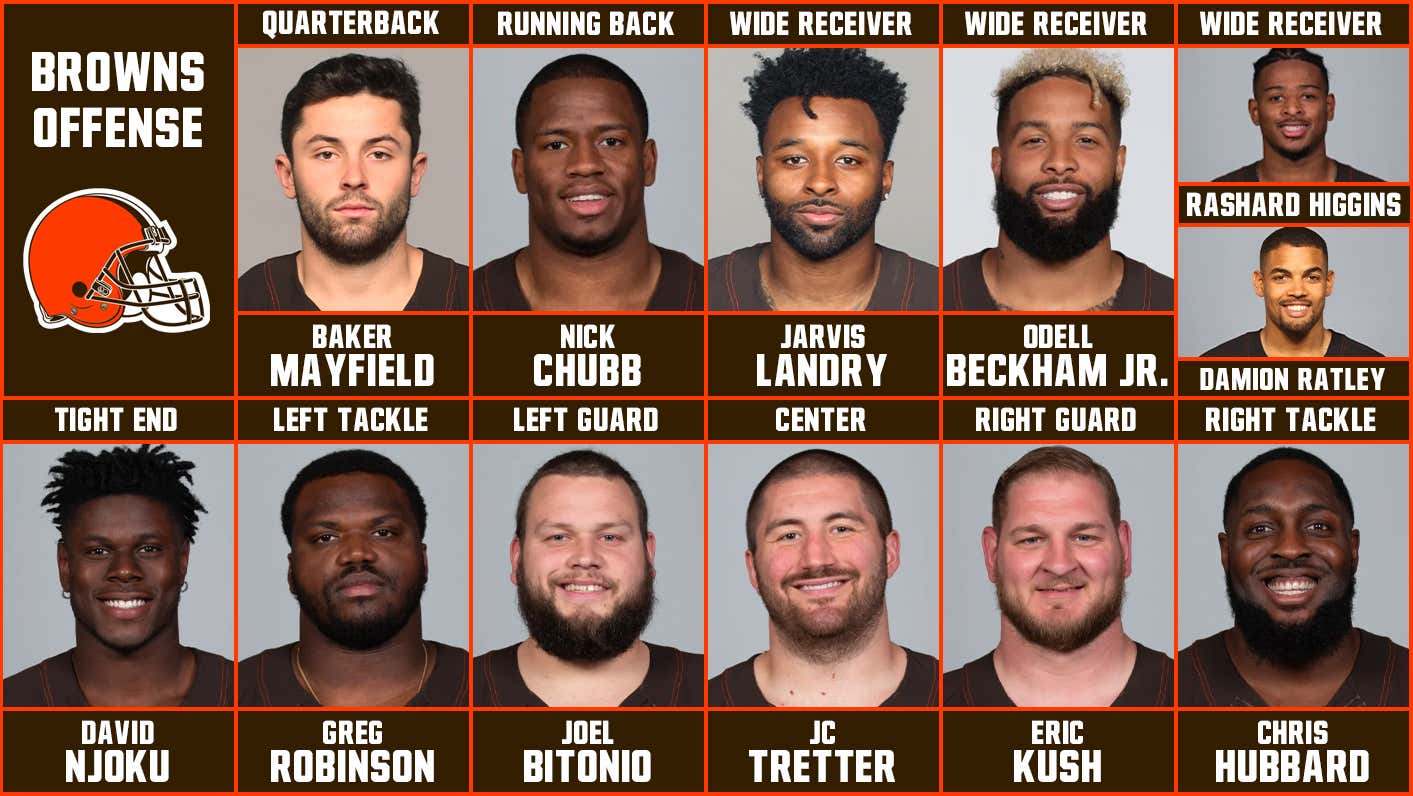 There are no changes to the Browns’ starting lineup on offense this week, but one thing does have to change and it has to do with Nick Chubb.

That shit cannot happen again. Chubb was one of the most productive running backs in the league last year. Establishing the run early to help take

Overall, in Week 1, Freddie Kitchens went away from got him the job and made him successful last season.

You have to think Kitchens will go back to what got him the head coaching spot in the first place. Their blocking tight end situation is different than last season, but at least they have more overall depth there this week with Ricky Seals-Jones activated for the first time. There’s no reason to believe the Browns won’t run more 12 and 13 personnel against the Jets than they did against the Titans. I know Freddie has some new sexy weapons at wide receiver (in the worst scenario possible, it may end up being too much for him as a first time head coach), but he has to make sure the offense fits to what made Baker solid as hell at the end of last season and, of course, the shaky offensive line.

I don’t have much else to say on the offense, as the penalties and gameplan did them in last week. Those are the two biggest things to focus on, without question. Aside from those two keys, the offensive line just needs to be competent in order to allow Baker to look like he did in the first, second and third quarters of their first game.

Key to victory for the defense: don’t commit 20 fucking penalties 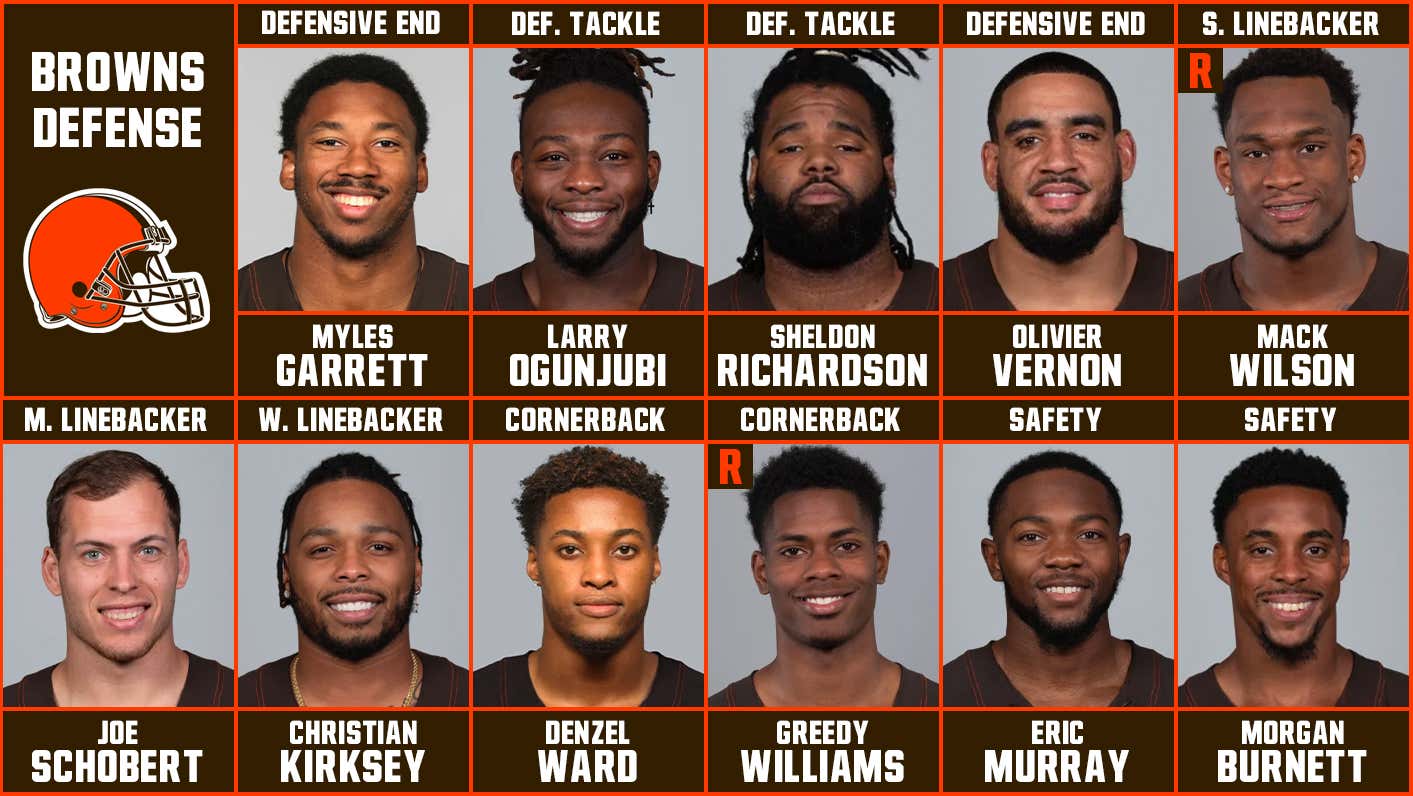 The Jets are going to probably rely on Le’Veon Bell tonight with the absence of Sam Darnold and half of their wide receiving corp. Surprisingly, Bell doesn’t have insane career numbers against the Browns from his time with the Steelers. In six games against Cleveland, the new Jets running back has three touchdowns (all on the ground) with an average just over 100 all-purpose yards per game. Don’t get me wrong, they’re solid numbers, but when it comes to the Steelers and Browns, I expect to always see career-best averages from players in the black and gold.

Damarious Randall being out for the Browns at safety is really shitty news and Jets fans should get a little confidence and hope back from that injury alone.

The big injury replacement to note, however, is the rookie Mack Wilson getting the start at linebacker. His huge preseason launched him up the depth charts…

His run-stopping ability leaves a ton to be desired and it was his knock coming out college. Wilson’s first NFL start coming against Le’Veon Bell is no tall task and he’s someone to keep an eye on tonight. In general, I’m not too sure how much I trust the Browns to stop Bell once he reaches the second level so that stout front four needs to do some work tonight.

Trevor Siemian isn’t a world-beater, don’t get me wrong (here are his stats from his last season of action 2017)…

But he has plenty of enough experience to not make this a joke of a spot-start. The Browns’ defense absolutely has the edge and must beat him tonight, but, win or lose, Siemian having a solid game wouldn’t shock me all that much.

The Browns didn’t force a turnover in Week 1, after a season in which they grabbed a ton of interceptions. No Damarious Randall hurts, but Denzel Ward and Greedy Williams should try and be aggressive and feast tonight. Siemian is more than capable of tossing a couple of interceptions. Ward, in general, needs to have a better game than he did in Week 1…

Ward’s rough Week 1 was quiet amidst all of the other issues, but they need to clamp down early. Siemian hasn’t played a regular-season game in nearly two years, but some early confidence would be terrible for the Browns.

While I don’t think the quarterback injury is the biggest issue for the Jets, I do think it is (hot take here, folks!) the biggest matchup of the night.

Just win. Nothing else. Don’t fuck this up.

If I were being level-headed, I’d say the Browns should go in and roll tonight. With all of the injuries and motivation from a terrible Week 1, Cleveland should win 35-0.

…but that isn’t how this works. My pessimistic-side is still there and I am worried about the Browns, on national TV… on the road… against a “backs against the wall” 0-1 team… and they could find a way to keep it very close, or even blow it.