Well would you look at what we have here. I know this is just an online sportsbook and they manipulate odds however they want to bring in business, but any time you see the -1000 you have to think it's a pretty darn certain thing. Like, the Rams have opened up at -460 to beat Tampa Bay at home this week. I'd say it's fair to lock into your survivor pools that the 3-0 defending NFC Champions will be able to fend off the 1-2 Bucs on their home field, and you're telling me it's more than 2x more likely that Urban Meyer will be a head coach next season? These odds tell you he's coming BACK, even if he says he's not.

I said it the day he retired, I said it again in May, and I'll say it again now:

And I'm not going to be some mad Ohio State fan when he leaves. Am I going to be sad? Yes, of course. I'd actually classify it as jealousy. Wishing he were still mine, like a breakup in high school. But at the end of the day, I can't be mad if Urban Meyer goes anywhere, because I don't think Urban Meyer wanted to be done at Ohio State. He's only 55 years old. Gene Smith and President Drake did him dirty, just like Jim Tressel was done dirty when he was the scapegoat.

I personally feel like Urban Meyer doesn't believe he did anything wrong last year. Rumors have flown around that he didn't even want to accept the 3 game suspension, and there were some inner workings that had the group come to the agreement that this would be his last year. Obviously none of it is proven fact, but I just refuse to believe that Urban Meyer willingly stepped away from a program that has so much talent and has such a stranglehold on both the conference and the rival. 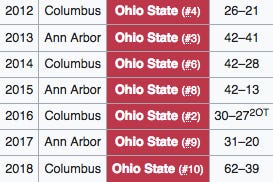 Why leave that unless you have to?? Buckeye Nation LOVES Urban Meyer, and the Buckeyes are LOADED. I know he's supporting us each week, but you're crazy if you don't think he wishes he were leading Justin Fields, Chase Young, and this bunch. It's like Carson Wentz watching the Eagles win the Super Bowl without him. You're happy for your guys, but you can't help but have some jealousy.

So where's he gonna go? Obviously USC is the heavy favorite. Urban has to like what he saw from his potential quarterback this week. Speaking of once notable programs, I'd imagine Michigan will probably be open here soon too, but I can't see Urban crossing that line. Maybe he'll take the job to sabotage the program? Eh, it's pretty sabotaged already.

The fact of the matter is that Urban Meyer, while REALLY good on TV, is not going to be able to just sit back and talk about rivalries and rankings and big games without getting the itch to get back into coaching. Let's just hope his heart is up for the challenge!