The Barstool Fantasy League has begun to heat up after a few weeks, and in Week 4 we get the best week of the season: Rivalry Week. Each matchup this week is fueled by pure, unadulterated hate. There is certainly no love lost between any of these squads. Being Rivalry Week, everyone wants to have a little extra skin in the game, so we used our Twitch stream this week to hash out what the bets will be for each matchup. 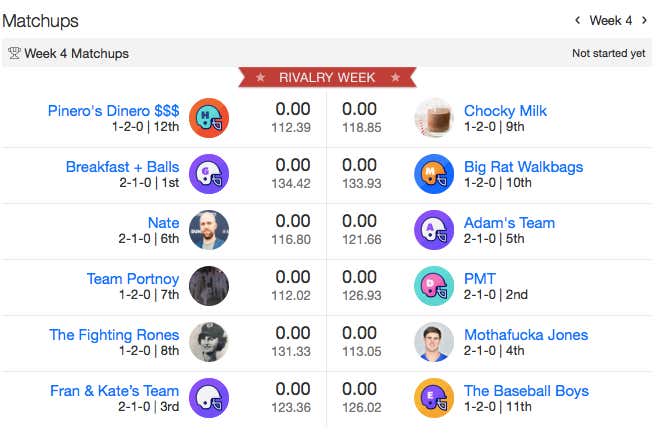 Let’s take a deeper look at the hatred flowing through each matchup and what’s on the line for the losers.

Hank vs. Coley: The Battle for Boston 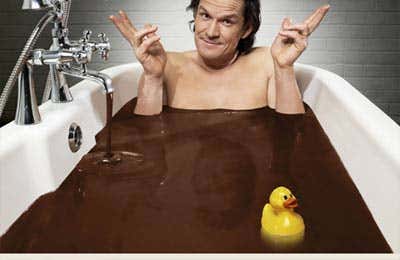 While Hank and Coley Mick will battle for Boston supremacy, their bet will be one of the most intriguing of Rivalry Week as well. Hank — and his longstanding rivalry with chocolate milk — will take on Coley and his affinity for Fruity Pebbles in a milk-off.

The loser will be forced to lie in a vat of either chocolate milk or Fruity Pebbles milk and afterwards drink from their tub. Either become the Massachusetts Master of drink your on filth swirled in dairy — quite opposite ends of the spectrum.

Clem is putting his die-hard Giants fandom on the line in this one in order to possibly receive a nice date night on the town and free babysitting services from Rone. But in the event Clem comes out on the short end this week, he’ll be forced to dress in Eagles attire to watch one of their games against the Giants. Rivalry Week squared, if you will.

Clem must be desperate for a night away from his kids to be willing to don Eagles attire against his own team. 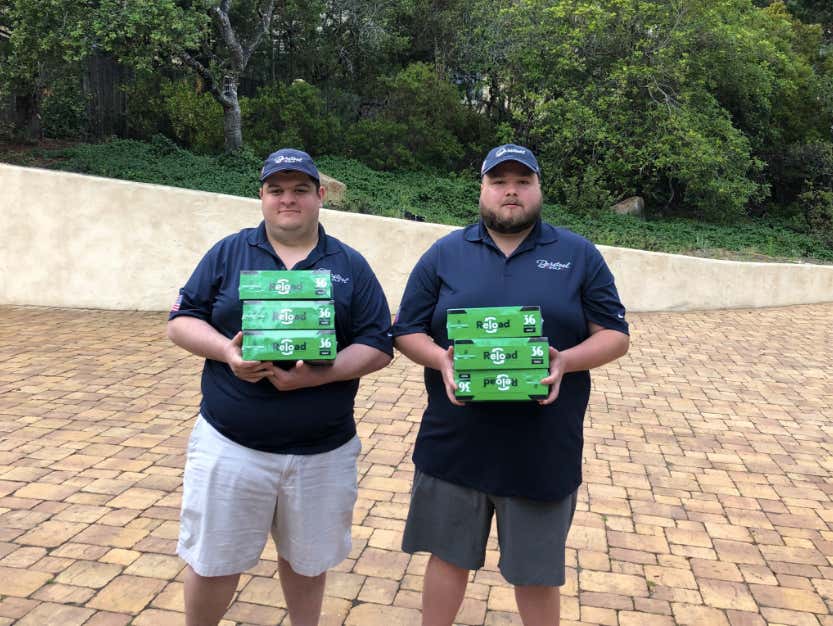 Here’s one of the most intriguing matchups and bets of Rivalry Week. Glenny was originally slated to be on what became the Big Rat Walkbags, but was thrown to the curb in favor of Big Ev. Now Glenny leads one of the most promising squads in the league alongside the Barstool Breakfast gang and is seeking his revenge on the team he once thought would be his own.

Fran and Kate vs. Hubbs and Chaps: The Few, The Proud, The Marines 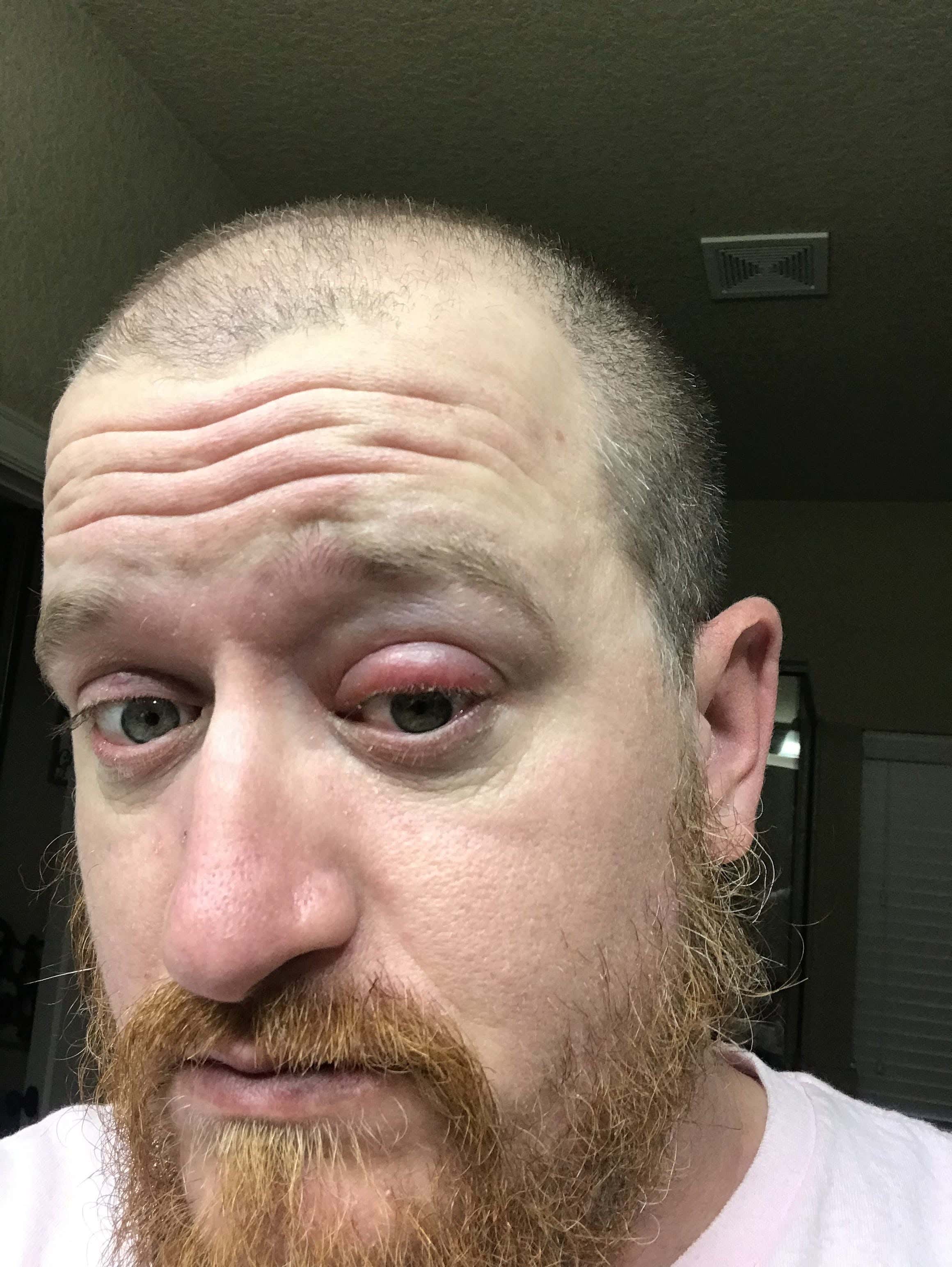 We have two of our military members squaring off in this one, with some interesting stakes. The winning team will get to do the makeup of the losing team, after which the losing team will head to the bar across the street from Barstool HQ for an hour. Obviously seeing Hubbs and Chaps at the bar in makeup seems like the more interesting outcome, but this one could be good either way. I really don’t think there’s much that could be done to fix that eye, though.

May the best service member win — although we support anyone who has bravely defended our country U-S-A! U-S-A!

LCB vs. Smitty: The Border War 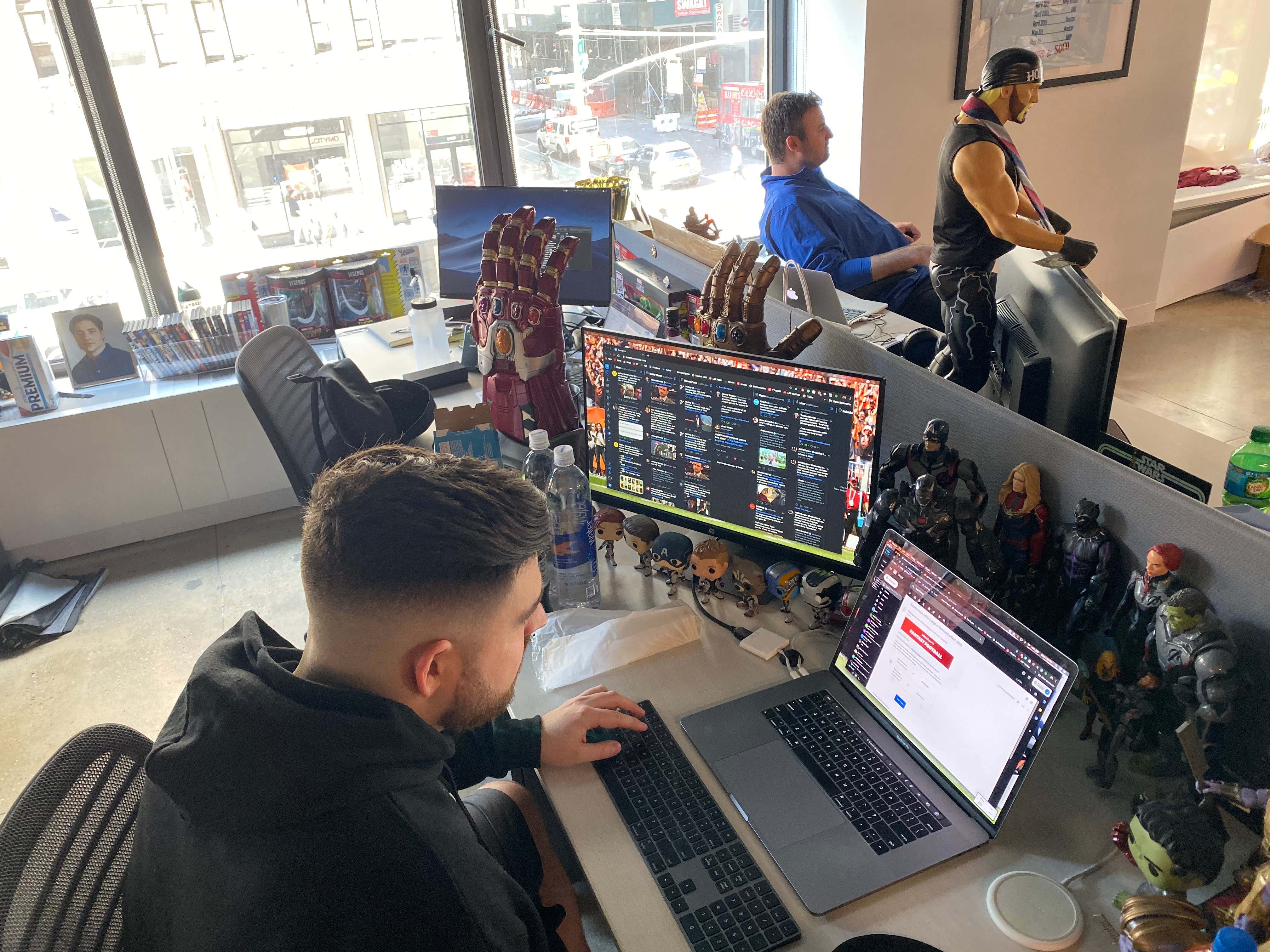 If you want to talk about two teams having no love lost, these squads are what you’re looking for. Jeff D. Lowe and KenJac sit mere feet from Smitty. The intensity builds each day and will finally culminate here in Rivalry Week.

Their bet has changed to a Seinfeld-esque wager where the loser has to be the winner’s butler for a day. Everything from food to opening doors, etc. The loser has to follow the winner around all day basically.

Team Portnoy vs. Pardon My Take: The Students Meet the Teacher 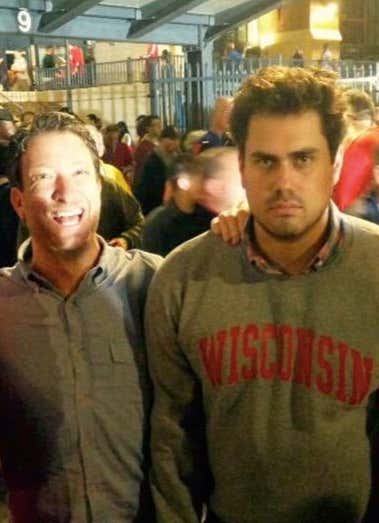 And to cap off Rivalry Week, we have a matchup of titans. The cream of the crop. The world’s No. 1 sports podcast takes on the man whose company launched it. If you need to be hyped up for this one, you don’t have a pulse. On the line for this game is a crossover episode of sorts. If PMT wins, Big Cat and PFT will appear alongside Dave for a pizza review. If Team Portnoy comes away with the win, Dave will host his own Patriots segment on PMT.

So that’s what’s on the line for this year’s Rivalry Week. You can toss the records out the window when these teams get together anyway, but with every team in the league currently 2-1 or 1-2, these matchups can go either way. May the best teams win.