The offense finally showed up and the defense remained dominant. The Bears got their revenge on the Redskins for ending the 1985 Dynasty.

Mitch threw for 3 TDs and looked much better than the first two weeks. Taylor Gabriel hauled in all 3 of the TDs including a spectacular catch on a great ball from Mitch. HaHa got his revenge with 2 picks including a pick six and Khalil Mack dominated the game from the get go.

Mitch had a terrible pick from the 6 when they should have been running. Nagy’s play calling was a little questionable but he figured it out down the stretch with a great 4-minute offense. The defense took their foot off the throat and almost let the ‘skins back in the game. They will need to tighten it up to beat better teams. 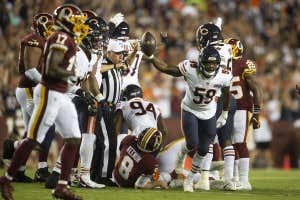 I blame John Fox and the great Marc Trestman for the Vikings taking a 6 game lead in the head to head. Matt Nagy has never lost to the Vikings and I don’t see it happening any time soon. Kirk Cousins has been leaving tinfoil grilled steak skid marks in his briefs all week thinking about going up against this defense. 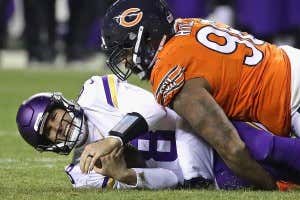 This is the best weather we have had all season. Cool and wet but still not good enough. I can’t wait for November and December weather. In the meantime the Bears will just play through it and dominate as usual.

The Bears covered last week finally getting me on the board. Now the odds makers are disrespecting us by only making us 1 point favorites. I know Akiem might not play (as of the time I’m writing he hasn’t been ruled out) but with our next man up mentality I still think we shut down the Vikings overrated running game. Kirk Cousins doesn’t have a prayer with Mack coming after him. Take you kids college education money and put it all on the Bears and the over.

Bears D/ST They have dominated actual football for 3 weeks but last week they really came through for fantasy owners with 5 turnovers and a pick six. Figure they should feast on Cousins today who sucks against teams of the Bears caliber. If you were lucky enough to draft the Bears D in the first round of your fantasy draft like I was then you should be rewarded handsomely today.

Anthony Miller With Turbo out someone needs to step up and assuming the Vikings will try to take A-Rob out of the game Miller will get another shot at being the guy. It’s Miller time!

Tyrik Cohen Nagy has successfully lulled the NFL to sleep on Tyrik. Today the Vikings and the entire NFL will be woke again. He’ll get the ball out in space and lookout. RB1 on your teams this week.

Kirk Cousins  Let’s be honest here. Cousins can eat a bad defense alive. He has nice weapons in Thielen, Digg, and Cooks, but whenever he is up against a real team that is above .500 and has a good D he crumbles like A-Rodg’s relationship with his mother.

Vikings D/ST I know they are a decent D but I believe that Nagy has a game plan that is going to pile up yardage and put some points on the board. Like I said expect Cohen and Miller to feast today.

Dalvin Cooks He’s having a very nice start to the season but he hasn’t had to deal with a defense like this. Even without Hicks the Bears front 7 is still too stout to run on. When Dalvin wakes up tomorrow morning he’s going to know he played the Chicago Bears. 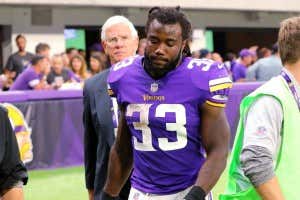 Offense: We have already discussed that Cousins is decent against bad teams but awful against good ones. Dalvin Cooks looks like the real deal but he hasn’t faced a front like the Chicago Bears. Thielen and Digg are good WRs but when your QB is running for his life all game there won’t be much on the stat sheet at games end.

Defense: Their D is pretty strong but without Sheldon Richardson and the fact that we are familiar with their scheme will let Nagy do his thing and attack them at their weak spots. They’re only giving up 15.7 points against on the season but that bumps up to 21.0 in road games. I like the Bears chances of exceeding that.

Offense: They finally got it rolling last week with Mitch throwing for a few TDs and Monty getting the rock down the stretch and showing Nagy, who hates him for some reason, why he is the man. Expect another balanced attack today with a heavy does of Tyrik and Monty in both the run and pass games.

Defense Khalil Mack had one of the greatest games in NFL history on Monday night. If you don’t think Kirk Cousins is fearing for his life right now you are sadly mistaken. If Akiem doesn’t play I have faith is the rest of our interior DL to pick up the slack and shut down the overrated Dalvin Cooks.

Minnesotans have a very unique accent and sound very Canadian. Shout out to Todd and Gordo.

Coming Up Next Week: We are heading to jolly ol’ England to show them how real bloody football is played.