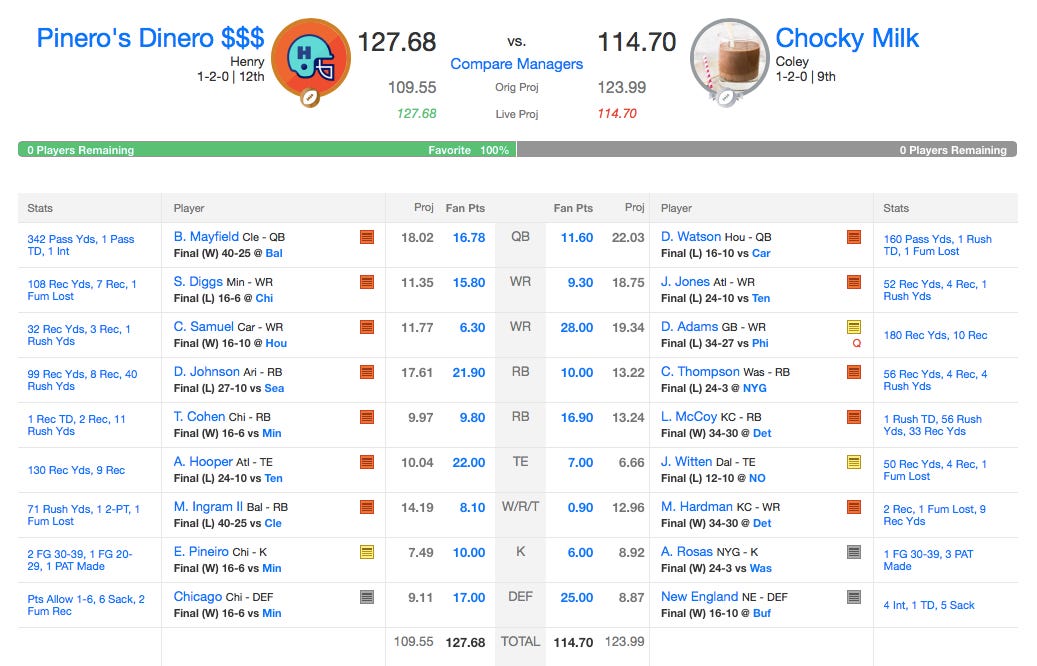 Hank came out on top in the Battle of Boston, avoiding his arch nemesis: chocolate milk. Instead, Coley will bathe in a vat of Fruity Pebbles milk and then drink from his own dairy filth.

Hank finally got a productive game from Stefon Diggs and can thank Austin Hooper and David Johnson for good days as well. Mecole Hardman's 0.90 points did Coley no favors, so I hope he loves Fruity Pebbles as much as he says he does. 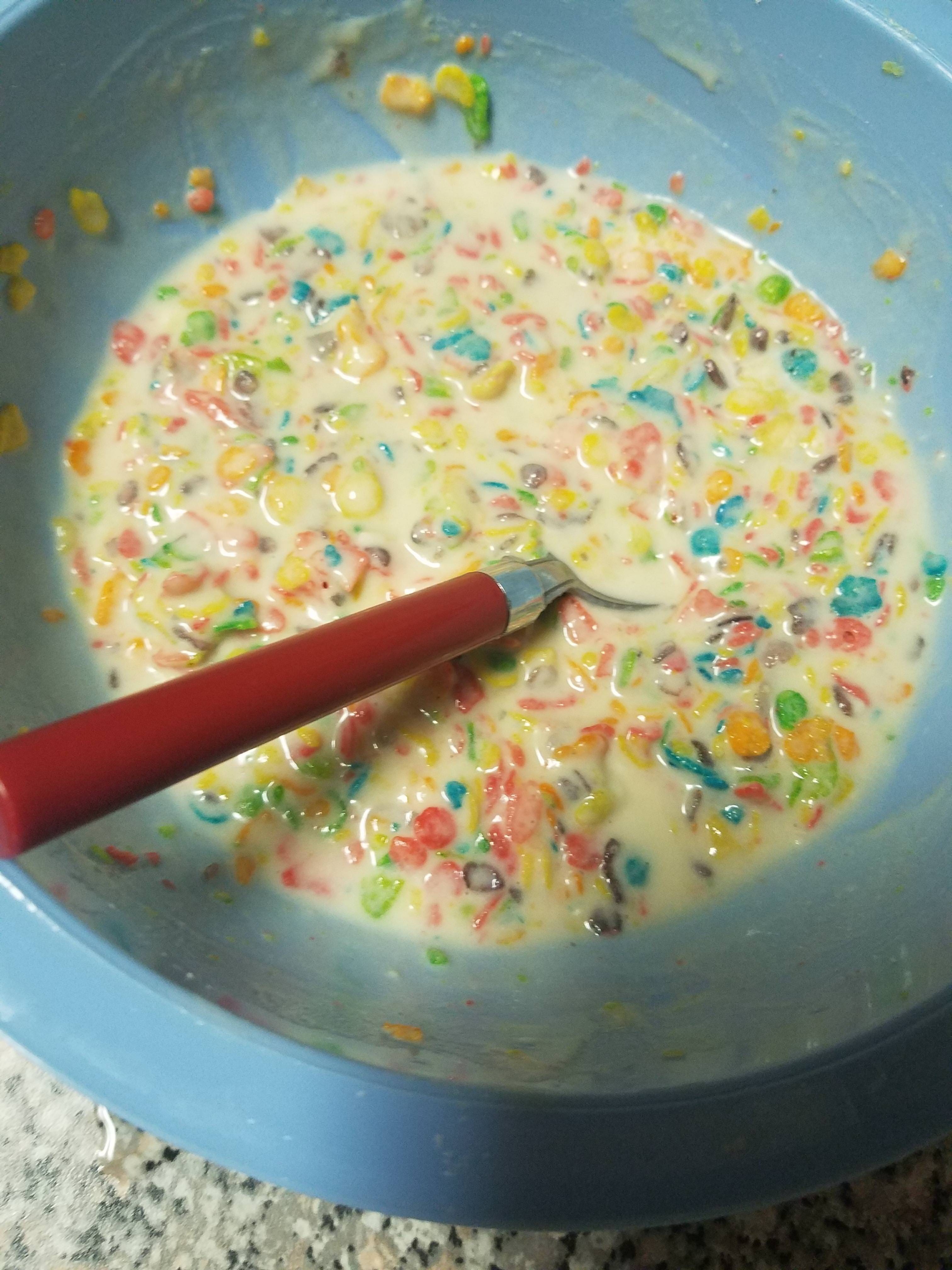 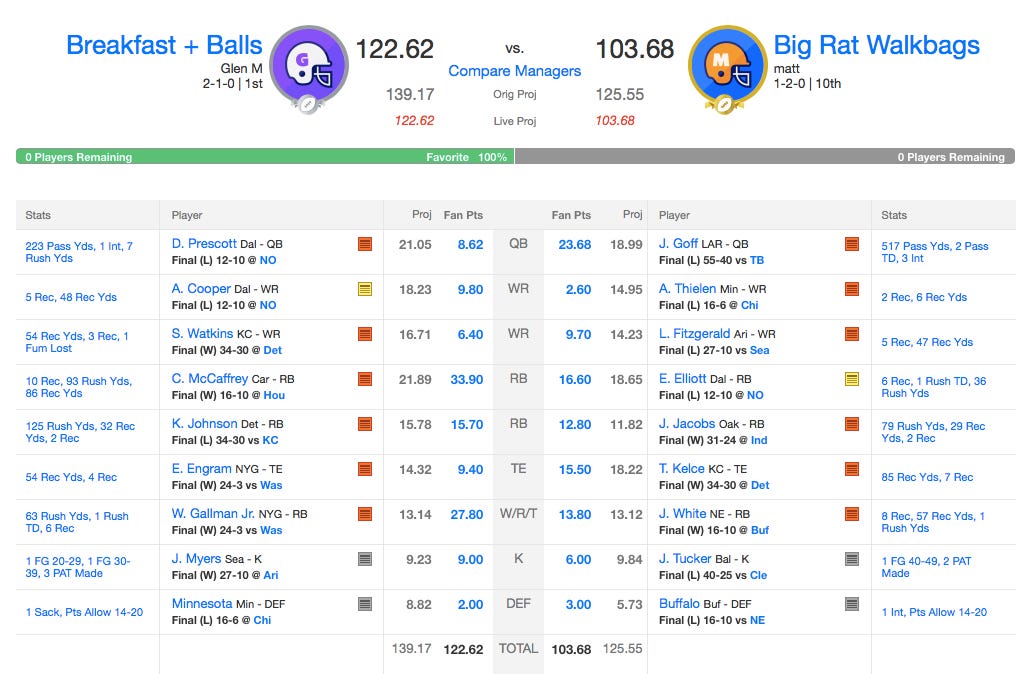 Glenny's Revenge lived up to the name, as the wagon Glenneth Balls has built alongside the Barstool Breakfast crew continued its steamroll through the Barstool Fantasy League by defeating the team which left Glenny out in the cold.

Thanks to Christian McCaffrey being up to his usual tricks and a breakout game from Giants RB Wayne Gallman, Big Ev will be the one spending a day in the fat pen. But Marty Mush and Brandon Walker aren't out of the woods either; they will be feeding Ev lunch from their hands. I bet they're wishing Adam Thielen had a few more catches this week. 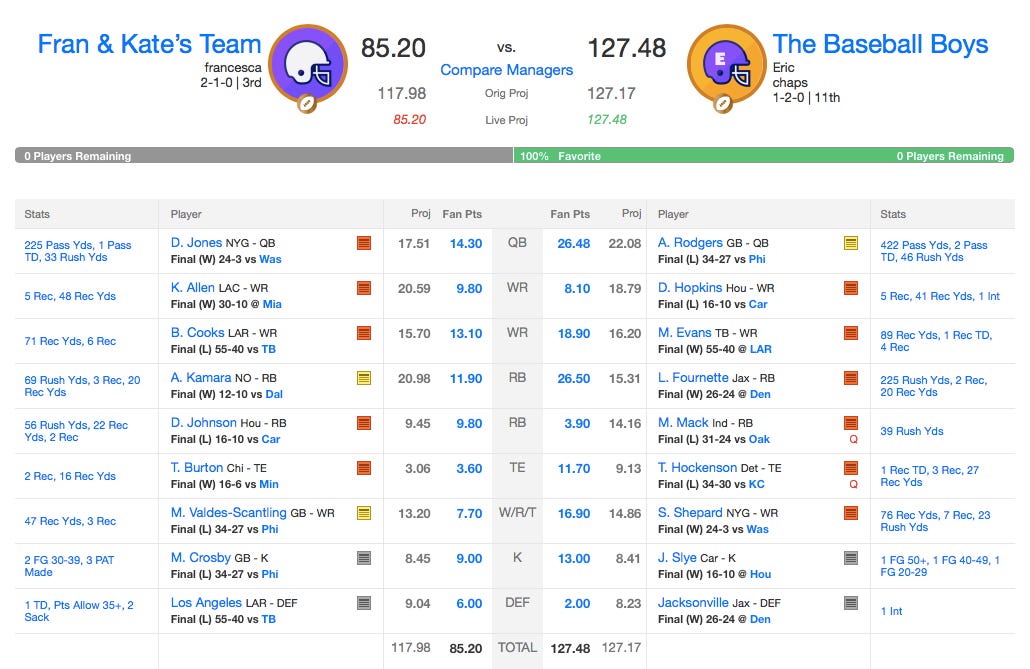 Hubbs and Chaps avoided quite a scene with this win, as Fran and Kate will instead be the ones having their makeup done by their opponents before heading out to the bar. Aaron Rodgers' performance and a career day from Leonard Fournette made sure the boys didn't really have to sweat this one much at all, but I'd imagine Fran and Kate will be a little nervous about what sick looks Hubbs and Chaps have up their sleeves for them. 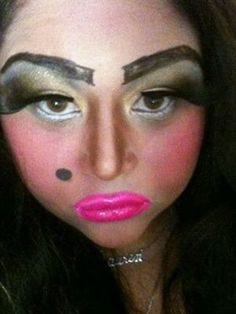 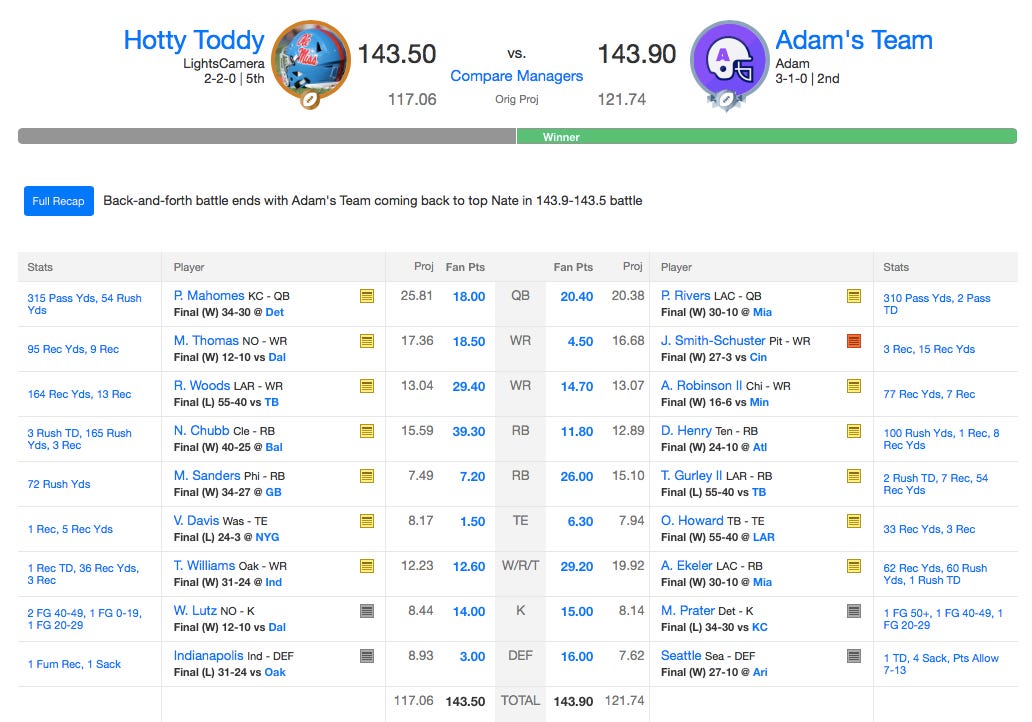 Talk about a BRUTAL loss for Jeff and KenJac. LCB had a 4.1-point lead heading into Monday Night Football with Smitty having Juju Smith-Schuster remaining. Smith-Schuster totaled three catches for 15 yards, good for 4.5 points in a full PPR league to give Smitty the narrowest of victories.

You have to feel for the LCB boys here. That's as bad a beat as they come. 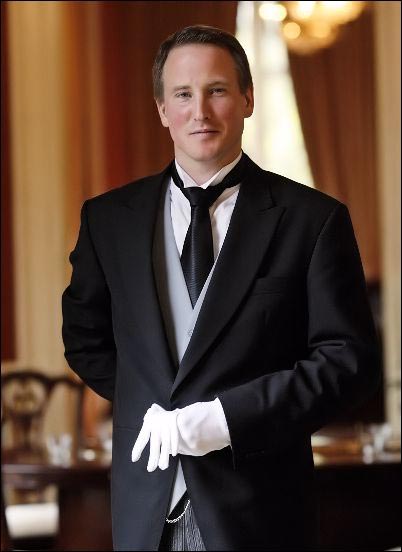 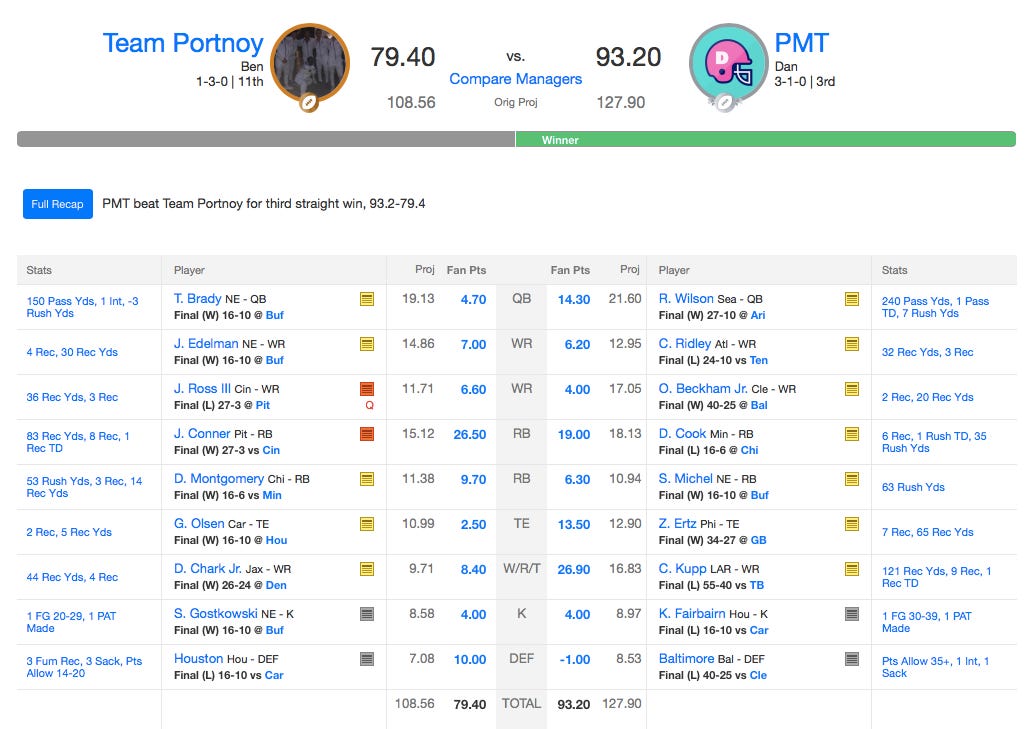 PMT continued its impressive run this week with its third straight victory, this time dropping Team Portnoy. This ended up being a much lower-scoring matchup than the projections would have indicated, but the PMT boys continued to just find a way to win. Thanks to Cooper Kupp and Dalvin Cook, Big Cat and PFTCommenter will receive a coveted appearance on a Dave Portnoy pizza review. 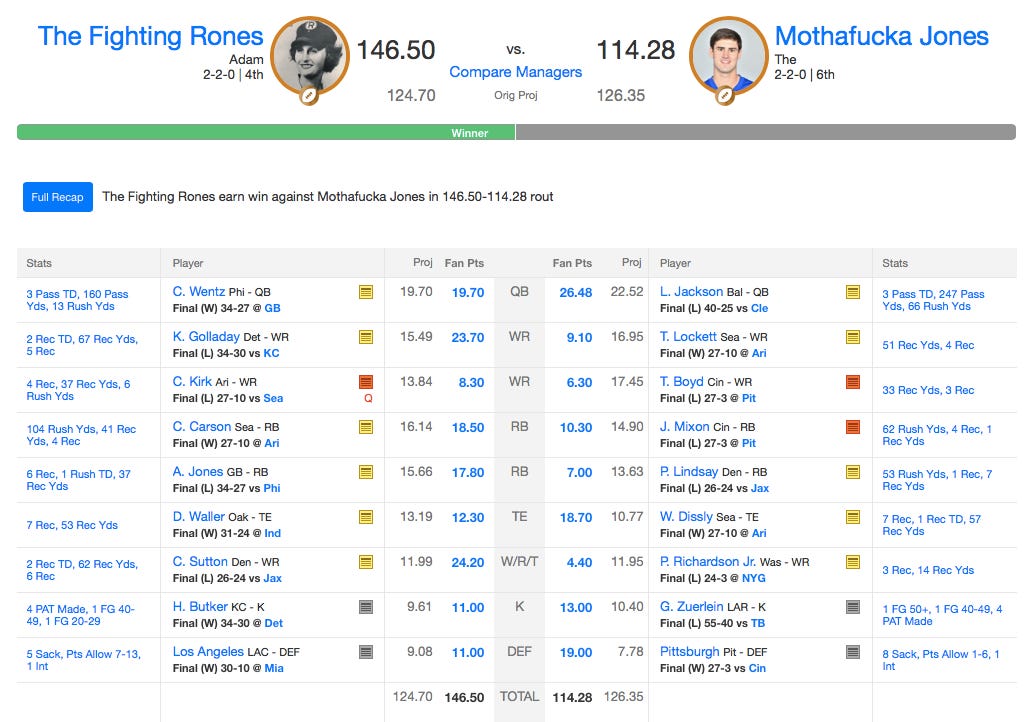 Looks like Rone won't need to brush up on his babysitting skills after all, as he scored a league-high 146.50 points this week to get the Rivalry Week victory over his nemesis Clem. Rone had five players score at least 17 points to lift him over the top and avoid paying for Clem and his wife to have a nice night out and spend the night babysitting Clem's kids. Instead, Clem will be donning Eagles gear to watch one of the Giants-Eagles games this season. 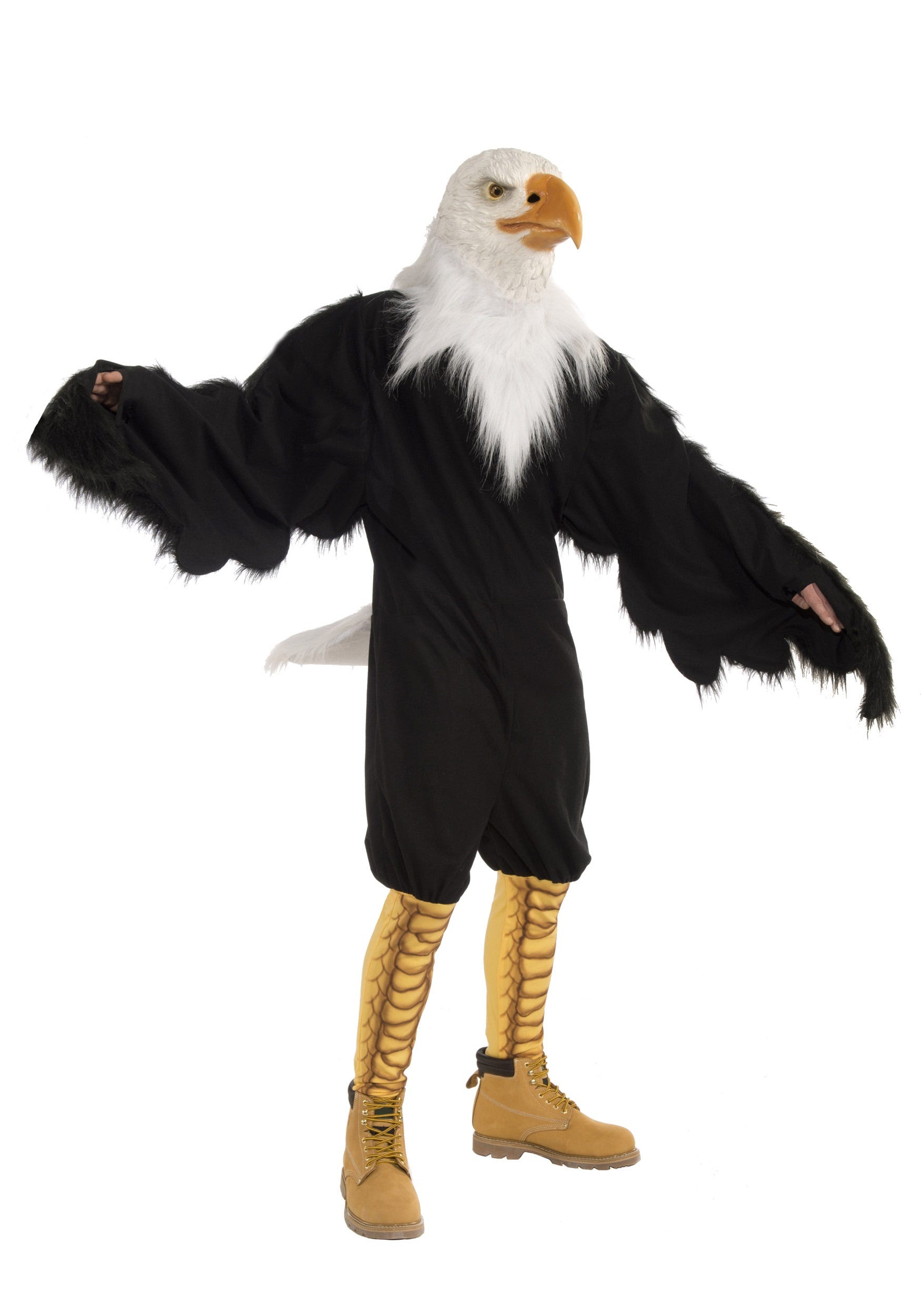 Team of the Week: Rone

Suckbag of the Week: Fran and Kate 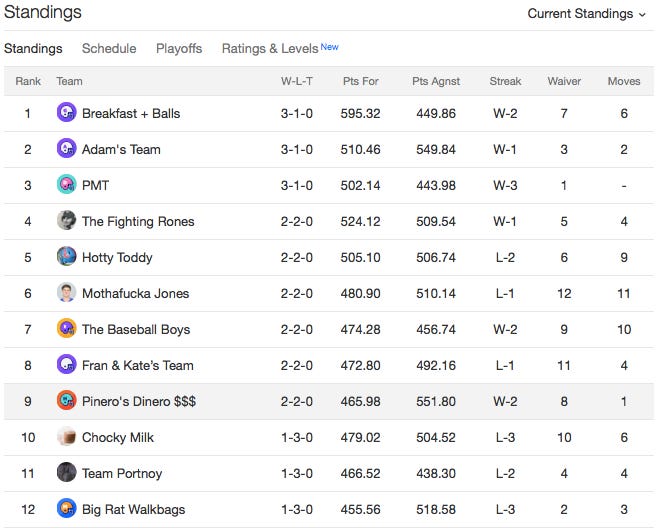 Thanks to everyone for following along during Rivalry Week. Be on the lookout soon for when all these bets get paid off and follow all things fantasy football and Barstool on social media @FFFPod.