This story is something right out of a movie. It’s a 2019 version of an old western where they rigged poker games in the ol’ saloon. But instead of setting the deck and slight of hand, it involves RFID technology, a live stream on Twitch, and a man named Mike P who cheated and stole over $250,000 LIVE ON CAMERA for a year.

It starts with a former Stones Casino employee, Veronica, tweeting her suspicions that a player has been cheating at the live streamed poker game 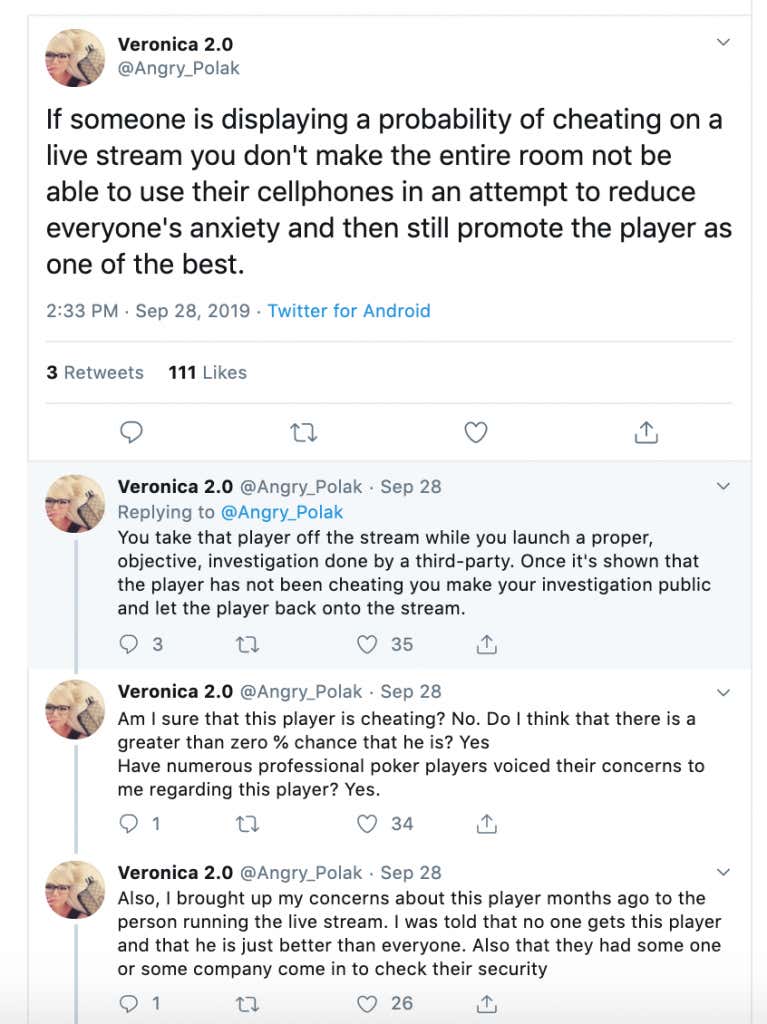 Now, you might be wondering, why in the world would a player cheat in a game that is streamed live on the internet? The answer? RFID technology. That’s the technology used to relay the cards the player is holding to the production people in the back. The RFID chip reads the cards so the production people can display the cards on camera. So then theoretically, someone in the back who is working on the live stream can then relay that information to a player at the table in real time. Without the stream, there’s no way for anyone to know the cards, but ON stream, it works.

What is the evidence that he’s cheating? Boy, where do we begin? I’ll try to keep it in simplistic terms, but basically, Mike P plays PERFECT poker. No, scratch that. He plays BEYOND PERFECT poker. He does things the best players in the world couldn’t even imagine doing. And he’s never wrong. He makes every single correct fold, he goes all in at every single correct time, and literally never makes a mistake.

These are his 2018 on stream results:

Winning sessions in 19 out of 21 times. Playing the most aggressive style at the table. But ok, fine, let’s say he was on the sickest heater ever, and he still lost 2 sessions, right? (2 is unbelievably impossible for how aggressive he is, but let’s go with it). Want to know something funny about those 2 sessions he lost on stream? A casino employee was out of town during those 2 sessions. That employee was NOT out of town the other 19. Really wild coincidence, right?

Want to know another wild coincidence? Mike P owned a custom phone app company. His company developed personalized phone apps. Want to guess if Mike P kept his phone on his lap the entire time and constantly looked down at it? It allows him to make plays that nobody in the world, and I mean nobody in the entire world, could ever make. 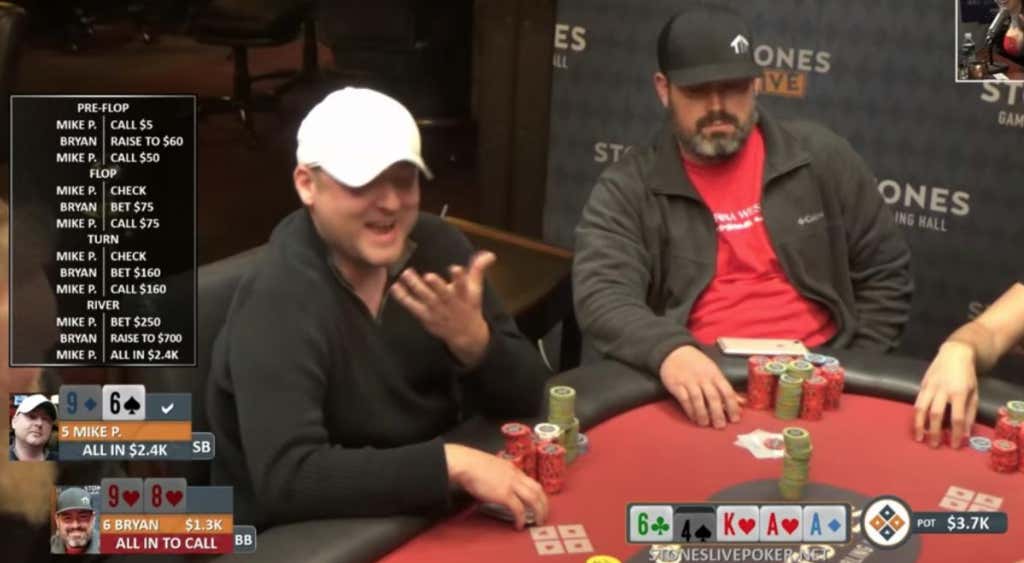 He’s so cocky about it. I don’t want to get too technical but the guy Bryan made a great bluff and then Mike P refused to fold because he knew his 6 was good in a spot it should literally never be good. The commentary booth rants and raves about how much of a poker God he is, how he’s the best in the world, blah blah blah. The thing is- he’s not. He only plays this style on stream. And if he’s so good, and winning at God-like win rates, he wouldn’t be playing the smallest games a casino offers. Someone making 700bbs/hour would move up in stakes. Someone who can play any 2 cards, in any situation, 100% perfectly would not play 1/3. But yet Mike does. At a podunk gambling hall in California. It’s insane.

What do you do when they take your cell phone? You put a device under your hat. I AM NOT JOKING.

See how fluffy his hat is at the table? 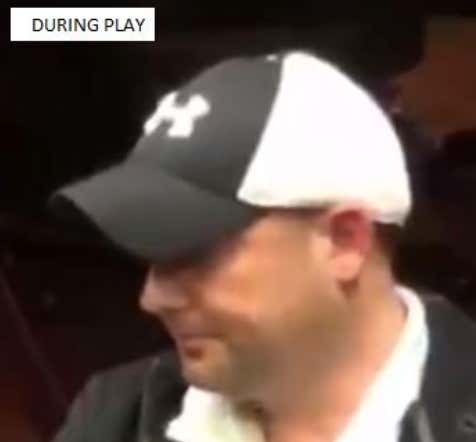 and then it sits normally while off the table? 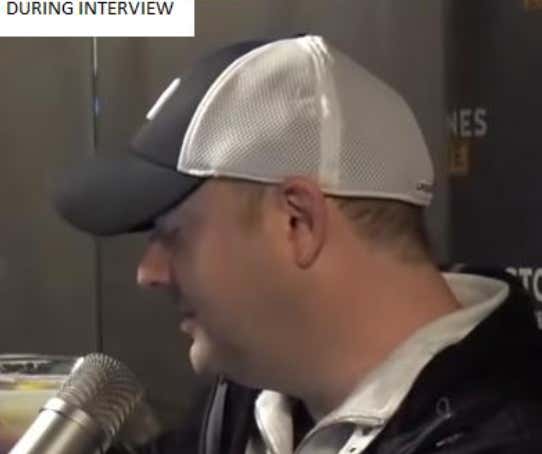 There is SO MUCH EVIDENCE. Here’s more:

If you’re into watching poker hands played by gods, here’s a fun one where he accidentally said out loud that his opponent can’t win, even though the cards hadn’t been flipped over yet. You read that right. What’s funny is that should be piece of evidence #1 but somehow it’s way down here in the blog because there’s so much other stuff that indicts him.

He is rubbing it into his opponent’s face before the cards are even shown. And nobody even questions it.

Overall he stole over $250,000 playing low stakes poker while on camera over the course of a year. And what did the casino do about it? Nothing.

The casino claims they launched a full investigation and found nothing. Crazy right? The people on the inside who had a hand in it found no foul play. But then Joey Ingram, a poker player who is a very big name in the poker community and does a lot of great work to keep the game honest, got to the bottom of it in a day. Joey watched 20+ hours of streams, did a deep investigation into his win rates, and with the help of the poker community figured out Mike P is a cheat. I don’t even think I need to say “allegedly” because of how obvious it is. Nobody in the history of the game has won at the rate Mike P won. Actually, I take back. One person has. Someone who played online known as “Potripper”.

And you might be able to guess, Potripper worked for Ultimate Bet and could see his opponent’s cards. Amazing, right?

What happens now? Well Stones needs to launch a real investigation, hopefully with real authorities involved. They have to pay back all the players who were cheated. And Mike P and whoever helped him needs to be thrown in jail. Low stakes players in Sacramento, California just wanted to play poker on stream, and they had no way of knowing they were signing up to be stolen from. AT a casino, no less. Not like it was an underground game. They were fucked by a casino.

I’ll give updates to this story as details come out. I feel it’s far from over, especially when we find out who else was involved. In the time being, I did an episode of my podcast about this subject, where we were joined by Joey himself to talk about all of this. I really appreciate if you give my podcast a listen, I’m pretty proud of it (we’ve also had on the biggest names in poker like Negreanu, Moneymaker, etc) and think you’ll enjoy it. You can also get better at poker by listening to it, so that’s pretty sweet as well. You can find us on iTunes and Spotify and other places too.