Alright, big Thursday Night Football game on the board tonight. The Los Angeles Rams are visiting the Seattle Seahawks in what is a big game for the NFC West. The Rams unexpectedly dropped a game at home last week to the Tampa Bay Buccaneers. That game surprisingly turned into a shootout and the Rams fell short. The Seahawks are 3-1 and trying to give themselves a little breathing room in that division. There’s a lot on the line tonight in the Pacific Northwest.

FIRST, let’s take care of business, shall we? If you’re in the great states of New Jersey, Pennsylvania or West Virginia you HAVE to bet this using FanDuel. Not only is FanDuel a great sportsbook, but if you use promo code STOOL, and make a $5 money line bet on the Jets or Eagles this Sunday, you will get 20-1 odds! That’s a $100 bet that only costs you $5. You cannot beat that anywhere in the world. Go to FanDuel.com/Stool and use promo code STOOL. 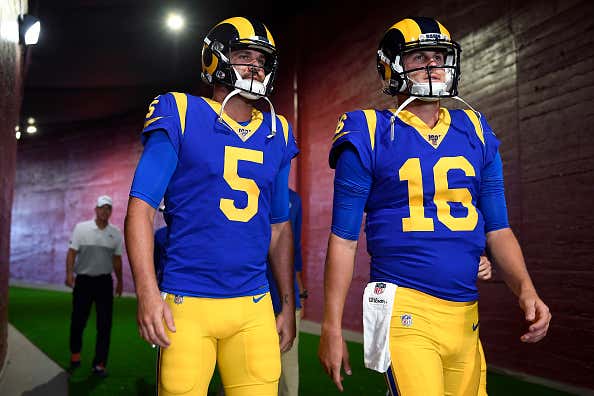 The Seahawks are 3-1, but they have not faced the most fearsome schedule. They beat the Steelers in Mason Rudolph’s first taste of the NFL, they beat the Cardinals, and the Bengals. That isn’t great. This isn’t to say the Seahawks aren’t good, because they are. But they haven’t been tested much yet.

The Rams have not looked like themselves on offense this year. In fact, they look downright pedestrian. The defense was playing well up until that ridiculous output from Tampa Bay last Sunday. Still the familiarity between these teams should help the Rams find some sort of comfort level on a short week.

I think ultimately this is a good spot for a Rams bounce back. They got smacked in the mouth at home by the Bucs and it may have been the best thing for them. That loss may have gotten their attention and now they face a familiar opponent in Seattle. While Seattle is a tough place to play, it’s a little easier in early October than December. I think we see some scoring tonight as well. Let’s play two here.