Author’s Note – Hi. It’s Carl. This blog comes to you from my personal NFL sharp, Dope Ropes. I’ve been tailing his NFL Sunday morning blog for years and it’s literally one of my favorite places on the entire internet. This is his 4th blog for us and unless I hear otherwise #5 will come from Dope himself. Last call for haters.

I’M BETTING ON THIS GUY TODAY 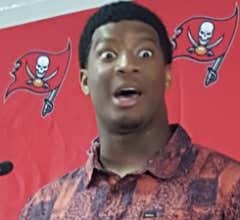 Let’s look at how each of these teams got to their current records:

+ Lost to 49ers, but 3 of 4 San Francisco TDs came from Jameis Winston pick-6’s (you read that correctly)

+ Blew an 18-point lead against the Giants, then missed a 34-yard FG that would have won the game as time expired

+ After losing Brees early, got fuckin SPANKED by a Rams team that is showing regression this year, in what was supposed to be a revenge game from last year’s NFC Championship game

+ Scored their first two TDs against the Seahawks by way of a punt return and a fumble return, building a lead that allowed Bridgewater to go into “game manager” mode

+ Scored zero TDs, but their 4 FGs topped the Cowboys

I see a Buccaneers team with a ton of potential that is cleaning up mistakes under Bruce Arians, and a Saints team that has caught some breaks that have masked the inadequacies of their back-up QB (not in his pants… Google that sledgehammer and never un-see it).  For real though, Bridgewater’s underwhelming play is going WAY under the radar.  Many call him “Teddy Two Gloves,” but I call him “Teddy Kid Gloves” because the Saints won’t let him attempt a pass over 10 yards.  He’s averaging 6.1 yards/pass, which puts him just below Eli Manning and Luke Falk on the year.  This is a shame because the Bucs biggest defensive weakness is their secondary, and Teddy is not equipped to exploit it.

And if you’re thinking that the Saints can simply rely on Kamara to own the ground game, not so fast.  Seemingly outta nowhere, the Bucs have the best run D in the league.  They’re allowing a league-leading 2.9 yards/rush, and that’s coming against some offenses that know how to run the ball: the Niners, Panthers, and Rams.  Bucs defensive coordinator Todd Bowles is a bit too stale to win over a locker room as a head coach, but he can lead the fuck out of an NFL defense (see Chuck Pagano).  The Bucs will contain Kamara, take a lead (Tampa’s massive WRs present a major mismatch against a Saints secondary that is ranked 26th in yards/pass allowed), and put the game on Bridgewater’s shoulders.  This is a losing proposition for the Saints.

Lastly, let’s just talk about expectations.  After Brees went down, the Saints were just hoping they could stay afloat until their savior returned.  They were not expecting to kick things off 2-0 while Brees declared a thumb war against nobody on the sidelines.  At 3-1 on the year, the Saints know they won’t need to dig themselves out of a hole – they can drop a couple games and still be poised for a playoff run in a few weeks.  As for the Bucs, this is their time.  The NFC South has never been weaker, and the Bucs have the chance to jump to the top of the division with a win here.  This is potentially a season-defining game for the Bucs, while it’s a “nice to have” for the Saints.

The first half is gonna be a grind.  The Saints will waste time trying-and-failing to establish Kamara, and Arians will work to gain a moderate lead while limiting Winston’s risk-taking (i.e. so he doesn’t throw three pick-6’s).  Both teams may open it up in the second half, but it will be a conservative start.

Wake up, ‘bate, take a shower, brush your teeth, and lock in a NE/KC teaser.  I just described your next 12 Sundays.  Why not take 6 points with the only two teams that consistently surpass expectations, no matter how hard oddsmakers try to stack the deck against them?  We hit this teaser last week, and I’ll probably throw it into every blog this year.  This week:

+ The Pats D might just shut out the Skins, who are spinning their wheel-O-shitty-quarterbacks to determine who gets picked off 3 times today

+ Mahomes will be at home in prime time looking to correct his pace towards 50+ TDs, facing a Colts D that is missing TWO safeties (Hooker and Geathers).  If you asked the Colts, I think they’d say having safeties would be preferable.

Albert Einstein once said, “The definition of insanity is doing the same thing over and over and expecting different results.”  As a guy who has dealt with plenty of mental illness, bring on the insanity.

This week, I’m betting on a below-average QB to perform against the Giants after getting pounded by the Bears in the previous week.  Sound familiar?  Yep, last week that QB was Case Keenum.

I talked that shit about the Giants secondary.  I called them “Jenoris Jenkins and the Jabronis.”  I poorly photoshopped Jenkins onto a Motown album cover, and that required 5 minutes of my life that I won’t get back.  Call me stubborn, but my feelings haven’t changed – this Giants defense blows.

It may not be pretty, but this is going to be a game of control.  Minnesota will be able to play their game against an inferior opponent – own both sides of the line of scrimmage, gain chunk yardage on the ground at will, grab a lead, and bleed this game out.  The one-eyed monster Mike Zimmer will have his vicious D in Daniel Jones’ face all day, and Wayne Gallman will return to being Wayne Gallman.  The X-factor will be the Minnesota passing game.  I don’t think they’ll need it, but if so, Kirk Cousins and Adam Thielen will be in sync for a bounce-back performance after last week’s embarrassment.  I’ve got the Vikings in a wire-to-wire victory here.