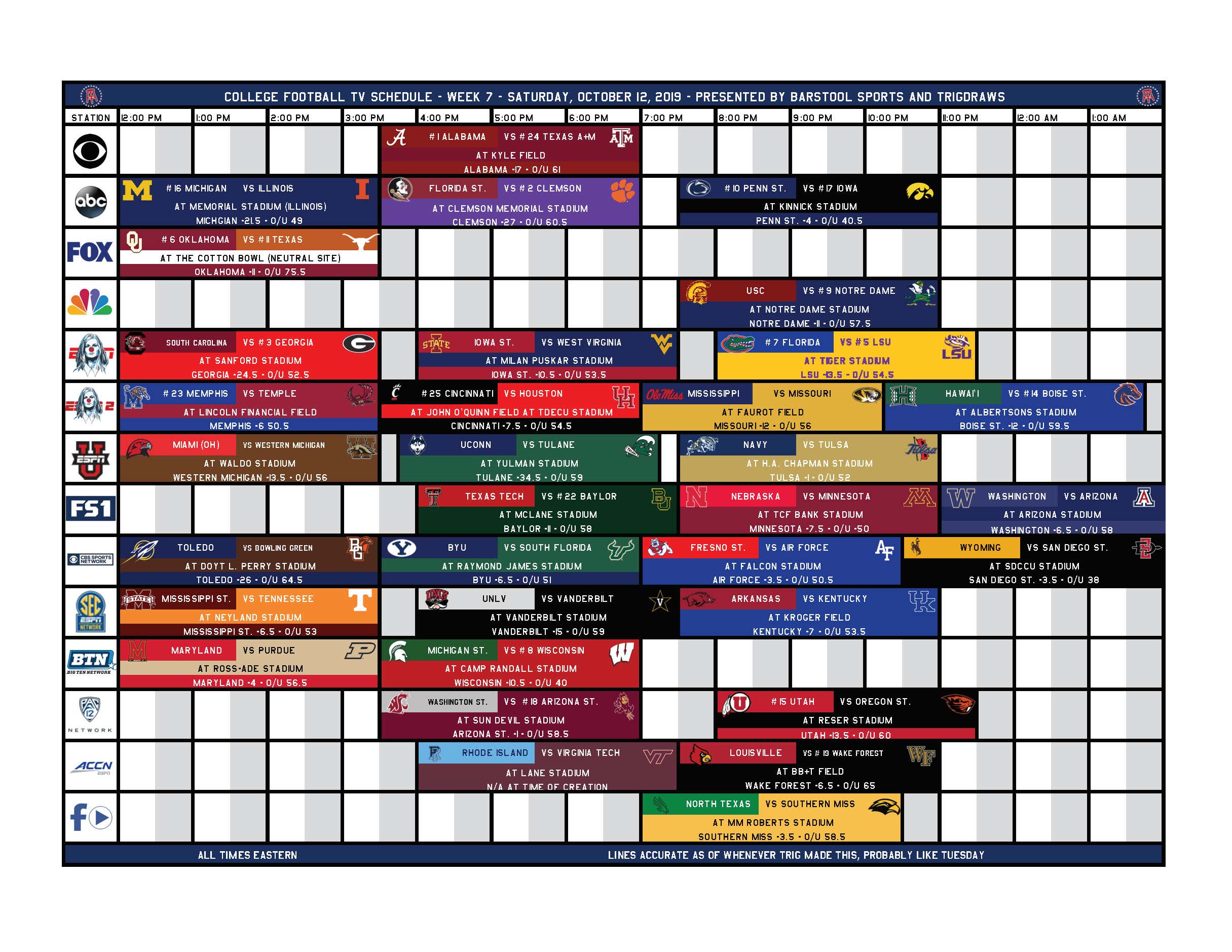 You can sign up with the code BARSTOOL to get started, and place any $50 bet and get $100 in bonus bets, no turnover required 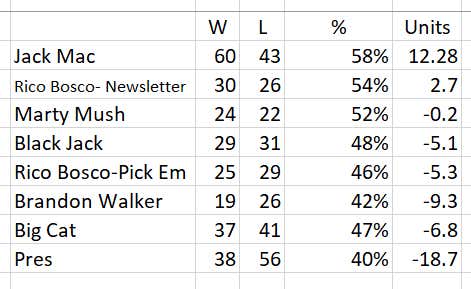 Betting Process: For week 1-4, I create my own lines using my preseason projections which are a combination of 2018 results, 2019 returning production, recruiting rankings, and coaching staff rankings (HC, OC, and DC). I then compare them to the vegas lines and anything that is off by 5+ points, I bet. It’s a new approach, that I’ve found success in while backtesting in the offseason. We are in week 7 now, so I am starting to incorporate data from the 2019 season. I still have preseason projections within my projections, but this is a change from how I bet week 1-4.

I bet throughout the week and post them on Twitter/Blog if you want to keep along.

If I was a professor and taught a college course on gambling, I would devote an entire class (or more) to why 2-3 Miami is a 2.5-point favorite over #20 Virginia.

These are one of those “vegas knows” games. Everything in your body is telling you to bet Virginia, but if you’ve been around the block a few times you are well aware that Miami is the play.

Here’s the thing: Virginia isn’t that good. In SP+ they rank 40th and FEI they rank 51st!!!! Miami ranks 32nd in SP+ and 50th in FEI. They are the better team and are at home. This pick is almost toooooo easy.

I’d love to let this number get to 14, but I just don’t think it’s going to happen.

LSU’s start to the season has been nothing short of spectacular. Joe Burrow has turned into one of the best QBs the state of Louisiana has ever seen. However, the defense he’s facing tomorrow is of a quality he nor his teammates have seen in 2019. Up to this point, the best defense LSU has seen was Texas, which ranks 48th in FEI and 66th in SP+. The Gators defense? 9th in FEI and 5th in SP+.

On the other side of the ball, Florida may not have the most electric offense, but they’ll have every opportunity to score against LSU, whose defense is in no way a dominant force.

Burrow may come out on Saturday and prove me wrong, but I’d rather that happen than not be on Florida in this game.

Michigan State’s start to the season has not been great! Losses to Arizona State and Ohio State leave Sparty not looking too hot heading into week 7. That’s the type of team I love to gamble on.

FEI still has Michigan State as a top 20 team, with a defense that ranks 4th in the country. The same goes for SP+, who ranks Sparty’s defense 6th.

Michigan State has been particularly strong against the run. They rank 2nd in Line Yards over at Football Outsiders. That spells bad news for the Jonathan Taylor Heisman campaign.

Give me Sparty plus the ten and the hook!

I really like what I’m seeing out of West Virginia recently. After their brutal loss against Mizzou, WVU has beaten NC State, Kansas on the road, and played Texas very tough for most of the 4 quarters. That’s thanks to Neal Brown, one of the best hires of the past offseason.

They are in no way a Big 12 contender yet, but they are looking like a team that should not be taken lightly. That’s why when I saw the 10-point spread pop up, I got so excited to take them as a home dog.

This is one of those plays that is going to make me feel ill when I press submit on it, but my numbers are indicating that Ole Miss should 100% be a play this weekend at anything above 12-points.

The Rebels have slowly been turning it around. They have covered two straight (@ Alabama, Vandy) and John Rhys Plumlee looks to be a QB that may be around in the SEC for a while.

Mizzou QB Kelly Bryant avoided a season-ending injury last week and is somehow looking like he’s going to be able to play on Saturday. I like this play even more if Bryant doesn’t play/plays at anything under 100%.

On the outside, it seems that Houston is a total mess right now:

However, on the field? The team is still pretty damn good, ranking 53rd in FEI.

They are coming off a bye after beating North Texas by 21-points on the road. Cincinnati? Well, they are coming off their biggest win in a veryyyyyyyyy long time. This is a massive letdown situation for the Bearcats, who I’m still not sold on at all.

7-points is too many on the road. Give me the Cougs at home getting a touchdown.

Oh, baby, do I love this game.

South Florida’s start to the season has been everything but spectacular. However, this is still an incredibly talented team that ranks in the top 10% of all G5 teams in terms of roster talent. That’s what made their start to the 2019 season slightly shocking. However, I think the ship has righted, thanks to QB Jordan McCloud, who took over for 35-year-old Blake Barnett last week:

The dismembering of UConn last week is exactly what USF needed.

Although they have beaten USC, I’m still not sure BYU is very good. They rank 98th in FEI and 81st in SP+. Plus, they’ll be without QB Zach Wilson (Mormon Jesus) for this game. I love South Florida.

I’ve been disappointed in Ohio all season. Their losses to Marshall and ULL were discouraging, but I’m not ready to give up on them yet in the 2019 season (I have a future ticket on them to win the MAC).

All that being said, they do not deserve to be a 6.5-point favorite in this game. I see them and NIU as very comparable teams.

Last week’s loss for NIU looks bad on paper. You never want to lose to Ball State. However, NIU was dominating that game until a torrential downpour started in the 2nd half.

They may not win the game, but I expect NIU to get back on track in this game while covering the 6.5-points.

Is UConn bad? Yeah, they sure are. However, they are improved. I’d say very improved from their 2018 disaster of a season.

Tulane shouldn’t be a 34-point spread over ANYBODY. They don’t have the firepower on offense to cover that spread.

UConn has next to no shot to win this game, but I do think they cover.

I hate to do this again because I don’t think the Middle Tennessee State Blue Raiders are very good, but this line is very appetizing. Last week we cashed with the Blue Raiders +5, as they won straight up at home. Now, they’ll look to continue that momentum down in Boca Raton against FAU.

Lane Kiffin seems to be bringing the Owls back to their 2017 form, but I still don’t think they deserve to be a 10.5-point favorite over a team they’ve only beaten once since 2008.

Wyoming is still living off of their win against Missouri! There’s no way this team should not be a favorite on a neutral field against Wyoming, which is what this line is suggesting.

SDSU is the better and more talented team. They take care of Wyoming during a little late-night Mountain West action.

Bets that I’m waiting on:

-Colorado State if it gets to -3