Author’s Note – Hi. It’s Carl. This blog comes to you from my personal NFL sharp, Dope Ropes. I’ve been tailing his NFL Sunday morning blog for years and it’s literally one of my favorite places on the entire internet. This is his 5th blog for us and 1st on his own. Say congrats. 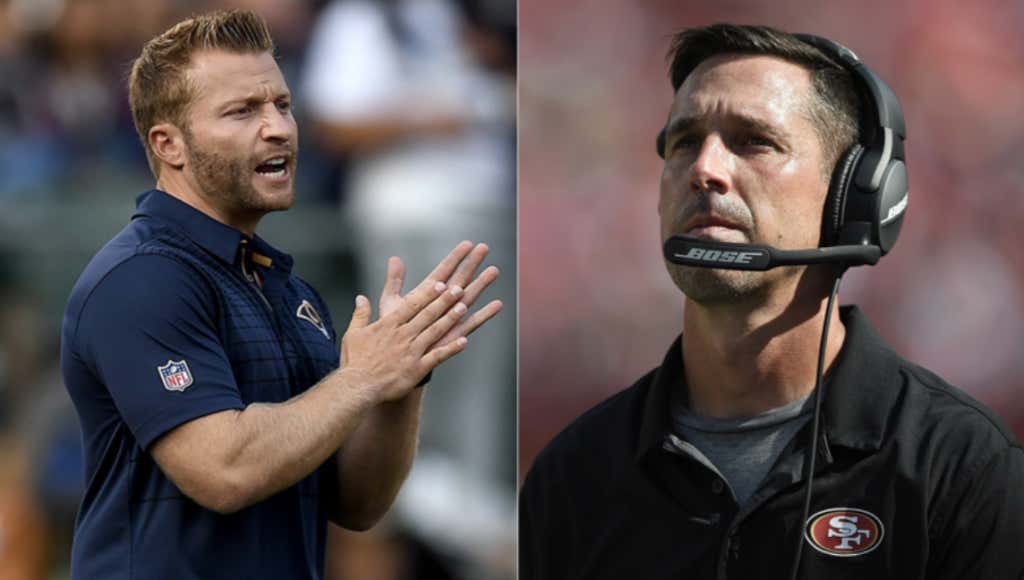 Looking back at last week, we’ve got a prime-time winner and a prime-time loser.  The Rams dropped a heartbreaker to the Seahawks on Thursday night, and the 49ers humiliated the Browns on Monday night.  With a lot of exposure on teams seemingly going in different directions, let’s buy low.

The Niners looked incredible on national TV against a Browns team that many thought was turning the corner.  But let’s be clear – that was a horrible spot for the Browns.  They flew cross-country on back-to-back weeks of travel, and they were without their top dogs in the secondary.  Shanahan was coming off a bye with a stable of healthy RBs ready to run wild, and they did.  It was a dominant victory, but they lost some key pieces.  The O-line was already hurting from the loss of Joe staley in Week 2, and now they add Mike McGlinchey to the list.  Throw in a knee injury to the dynamic chess piece Kyle Juszczyk, and that leaves a LOT for Kyle Shanahan to untangle on a short week.  Shanahan will figure something out because he’s a goddamn genius, but the circumstances are not ideal.

Speaking of ideal, McVay gets extra time to prepare at home against a defense that hasn’t met his caliber of offense.  Here’s who the Niners have faced: 3-pick-6 Jameis Winston, Andy Dalton, first-start Mason Rudolph, and Baker Mayfield.  The Niners D has flashed, but it certainly hasn’t seen a true test.  With the potential of Sean McVay losing his third straight and falling three L’s behind a divisional opponent by Week 6, this will be a true test.  Using TEs/backs to chip and buy Goff extra time in his home environment, McVay is gonna put this game on a fucking tee for his young QB.  Goff and Kupp will pitch-and-catch all over this San Fran D.

My only fear is that the Rams D has trended down since their hot start against an injured/inaccurate Cam Newton and an off-the-bench Teddy Bridgewater, so I’m gonna hedge a little on that…

This match-up means a little bit more to McVay and Shanahan.  Each one wants to be thought of as THE young offensive genius in the NFL, so they’ll both put everything on display to ensure they are not outshined.  This is why the lowest combined total in their previous match-ups is 49 (this includes games with C.J. Beathard and Nick Mullens).  This Over was destined since these two met in Washington nearly a decade ago:

2010 Shanahan: “Quick answer: no.  Focus your rainman brain on football, and in a few years, you’ll be one of the best head coaches in the league.  I’ll be a phenomenal head coach too, and any time we play each other, we’ll score a million points.”

Everyone’s obsessed with the Over in the Texans/Chiefs game, but this is the game that should be getting your attention for points.  The Atlanta and Arizona offenses have disappointed this year (20th and 21st in points-per-game), but this isn’t about the offenses – these defenses are fuckin abysmal.

The Cardinals D is uniformly bad.  They can’t rush the passer, they can’t stuff the run, and they can’t defend the pass.  All relevant statistics are damning, and what’s worse is the consistency week-over-week.  No variance.  No trending up.  Just a straight line of shittiness.  The Falcons offense may be under-producing in points, but they’re 10th in yards per play and should be able to break the red zone condom for TDs against this putrid Arizona D.

As for the Falcons D, I told you last week that they would be comically bad without Keanu Neal, and they proceeded to surrender 53 to the Texans, who went over the game total of 50 by themselves (winning bet, thank you).  Atlanta’s D was never good, but Keanu Neal was the lynchpin preventing it from becoming an abomination.  Jump against this Atlanta D now before people begin to realize this may be the worst defense in the league.

This is going to be a “get right” spot for two offenses that have fallen short of expectations this year.  Look for a shootout bewteen two teams that are going nowhere.  I don’t know how Atlanta could lose this game, but if they do, Dan Quinn’s gonna be rollin’ J’s and scoping co-eds with Jay Gruden.  He’ll land on his feet though.  I hear there’s an opening for “white supremacist #3” in the reboot of Sons of Anarchy.

I’m admittedly making this bet because this is a classic “Vegas knows something I don’t” situation.  Cleveland was -3 on the look-ahead line, the line shifted all the way to SEA -1.5, and STILL people were  pouring bets on the Seahawks before some late sharp money on CLE pushed this back to a pick’em.  My caveman brain saw what happened last week and wants the public side with Seattle, but I can’t ignore the value with Cleveland.

I already talked about how bad of a spot it was for the Browns on Monday night, so let’s focus on their opposition this week.  The Seahawks have the flimsiest 4-1 record I’ve ever seen.  Everything about Seattle is average, aside from having an MVP-candidate at quarterback.  Russell Wilson is to the Seahawks what Denzel Washington is to John Q.  If Greg Zuerlein hits a very makeable FG last Thursday, we’re looking at a 3-2 Seahawks team with narrow wins over the Bengals & Steelers, and a victory over the lowly Cardinals.  This team plays boring football for three quarters, then simply hands the reigns over the Wilson to bail them out.  With the Browns getting CBs Denzel Ward and Greedy Williams back from injury, the Wilson bail-out may not come so easily.  I expect the Browns to get Chubb going on the ground, and for Baker to bounce back at home against a mediocre pass defense that has one of the worst safeties in the league (Tedric Thompson).  Wilson may miraculously pull a win out of the clouds, but the 3-point line swing plus the 6 points from the teaser should give us plenty of protection.

I’m typing my first sentence about this Titans/Broncos game and I’m already sick of it, so I’ll keep this short.  The Broncos will only a have a couple wins this year, so I want to attack by selling “high” following their sole win on the season.  Vic Fangio is a great defensive mind, but the “strict disciplinarian” bit as a head coach gets tiresome quickly if you aren’t winning games.  This team knows their season is toast, so I’m not seeing a roster that is willing to bleed for their coach.

Both teams will want to play a boring game, but the Titans can do it better.  When people hear “Broncos” and “Fangio,” they think “hard-nosed defense.”  But the sneaky thing here is that the Denver run D is soft (22nd in yards/rush allowed).  The Titans will be able to own the line of scrimmage and control this game.  The Broncos may win this snoozefest, but it won’t be by more than a score.  Plus, the Titans are contractually-obligated to do the opposite of what they did the previous week.  They scored 7 points in a loss to the Bills last week, so they’ll of course dominate this week.

Diggs has only eclipsed this total once this year, but I want the Over.  Coming into last week, Diggs was asking to be traded while Cousins was apologizing to Thielen for not getting him the ball.  It was a goddamn mess, but the Vikings put their season back on track with a commanding win over the Giants (winning bet).  Facing Philadelphia’s imposing front-7, Dalvin Cook will struggle and Cousins will have no time to hit Thielen on improvised routes.  Minnesota will have to rely on quick timing routes downfield, and Diggs is the perfect man for the job.  Since Thielen got his pacifer last week, this is the week to appease Diggs, especially against an Eagles secondary that has been ravaged by injuries.

If you’re looking for a pick in the Redskins/Dolphins game, I know a guy.  Give ‘em a call.

Lock these bets in, smash some brews, and have yourself a goddamn day.