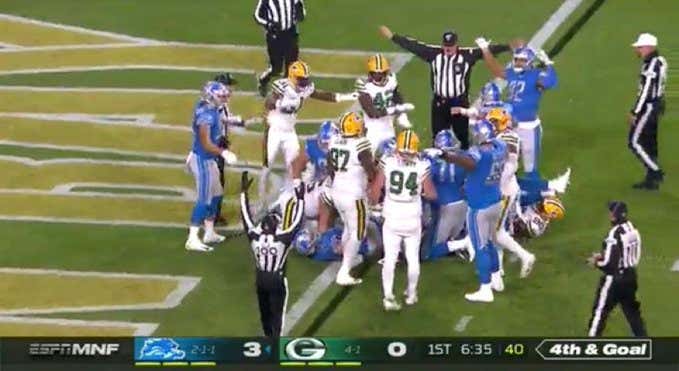 The officiating crew from last night’s MNF game may be the most hated crew I’ve seen since the infamous replacement officials game, which ironically enough also involved the Packers. They were so hated that they united Twitter last night, which is something that never happens.

Desmond Howard even called for the officiating crew’s bank account to be investigated:

I’m not sure if that was a joke from Desmond Howard, but it did blow up on Twitter. Then came this tweet from Incarcerated Bob, which is not a joke:

You may have no idea who Incarcerated Bob is, but he’s definitely not a nobody. The guy has been getting inside stories for a very long time. He had the Peyton Manning to Broncos story way before anybody else. He’s whiffed on stories before, but I want to say he’s gotten way more stories right than not.

Throwing an NFL game must be incredibly difficult. There are so many moving parts. You’d have to sneak past the NFL. You’d, also, have to have everybody in your crew on the same page as you. On top of that, you’d have to trust them not to rat on the federal crime you are committing.

Do I think it happened last night? Not really, but it’s certainly a possibility. It’s happened in the NBA. It happened in college basketball:

The highest limits you can get from a sportsbook is on NFL games. So, if you were to throw a game, you could, in most instances, get the most money down if it were an NFL game. If you walk into MGM and ask for 200k on a Hartford Hawks – Maine Bears college basketball game, they’d laugh you out of the building.

The chances of this actually happening are very low, but every part of my body wants it to be true. This is the type of shit that gets me going. I’d compare it to a political junkie when he/she hears about a big scandal about to break.

We’ll probably never know if it’s true, but I wouldn’t be shocked to learn it was. If there was someone to throw a game, it would be a guy named Clete.