Man I love Bryn Kenney. He is one of the best tournament poker players in the world, but also very old school degenerate as well. While everyone out there is worried about bankroll management and those nitty things, he has no problem putting half of his net worth on the line in a £1 Million tournament. Most poker players probably had 10% or less of themselves in that tournament, Bryn had the majority of himself, and then took 2nd place for 20 million dollars. He legit used the reasoning of “having a feeling” for putting that amount of money up. What a legend. Is he smart with his money? Probably not. He’s gone from having ~$1 million to being “broke broke” 4 or 5 times, as he discusses in this interview:

Bryn now sits at number 1 in pretty much every category 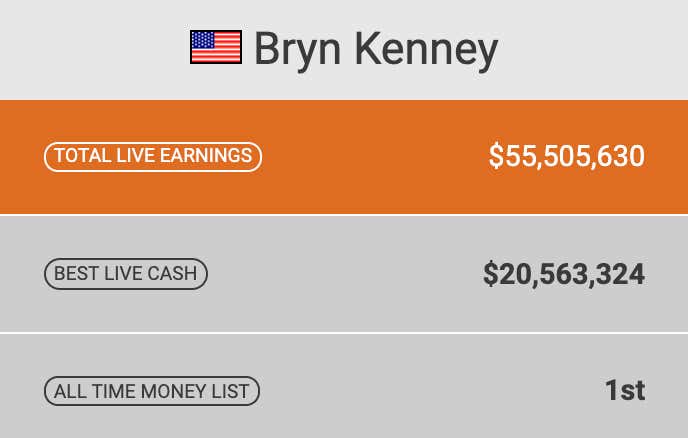 thanks to his 8 separate million dollar scores he’s had since just 2016.

Not too shabby if you ask me.

Bless Bryn Kenney, and may he never go broke again. Or not, whatever. He’ll just win a million buck all over again. Hopefully we can get him on the Cracking Aces Podcast soon, would love to talk to him for an hour about his outlook on life and money and everything in between.

If stories like this interest you, I would love if you checked out my poker podcast, we’re on iTunes and Spotify. We’ve done 23 episodes so far and 22 of them are good. It’s probably the thing I do best. So please, scroll through the eps, find a guest (we’ve had on a tonnnn of huge names in the poker world like Negreanu, Moneymaker, Reiss, Merson, Maria Ho, Fedor, Galfond, and a bunch of others) or topic that you like (tips to get better at poker, old school online stories, favorite Main Event runs, degen stories, and much more) , and have a listen. It don’t suck. Some things I do suck, but not this. I’m quite proud of the product to be honest.