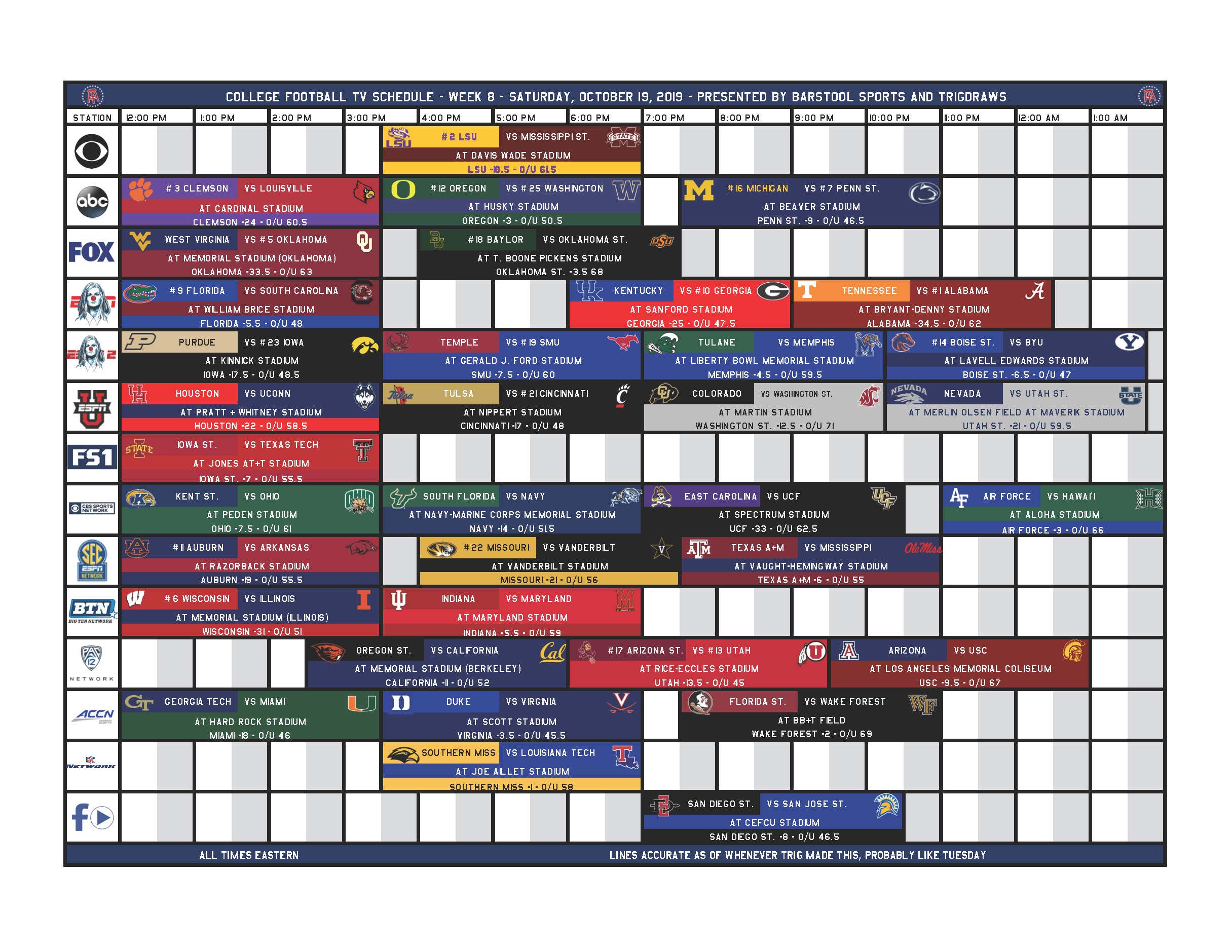 Sign up with code BARSTOOL and deposit $50. If Dave hits any of his Mortal Locks from Pick Em and/or the College Football Show you’ll get a $100 bonus bets.

PointsBet also has Barstool’s First Touchdown promo for college football: Place a moneyline bet on select NCAA games, and if your team scores the first touchdown of the game, you win, even if your team goes on to lose! This past weekend, LSU bettors were paid out just five minutes and five seconds into their game against Florida.

Betting Process: For week 1-4, I create my own lines using my preseason projections which are a combination of 2018 results, 2019 returning production, recruiting rankings, and coaching staff rankings (HC, OC, and DC). I then compare them to the vegas lines and anything that is off by 5+ points, I bet. It’s a new approach, that I’ve found success in while backtesting in the offseason. We are in week 8 now, so I am starting to incorporate data from the 2019 season. I still have preseason projections within my projections, but the numbers I have are mainly based off of 2019 data at this point. 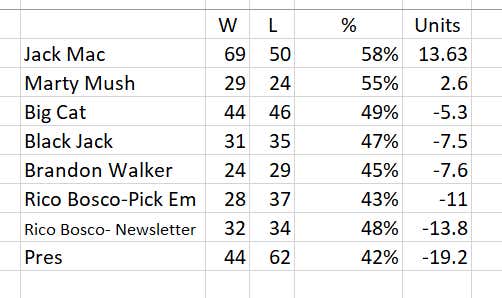 We start tonight in one of my favorite places in the world: Boca Raton, Florida.

Lane Kiffin is putting together another relatively good FAU team this season. They currently rank 51st in FEI and have a clear shot at winning another CUSA championship.

Marshall is still being overvalued by the market as a top tier Doc Holliday team. Bad news for Marshall: they are not. They rank 108th in FEI and could find themselves not in a bowl game come December.

I love FAU in this spot.

Friday night, in the dome, and we are getting points? Dino Babers probably came himself when he saw this line come out. Nothing gets Dino going like being a home dog on a Friday night in the ole Carrier Dome.

I hate this, but I also love it. That’s my relationship with betting UConn this year.

Houston has a history of not being great at the most intimidating stadium in the country: THE RENT.

Houston has bigger things to worry about than UConn. A team that has seen drama since the first game of the season has arguably their biggest game of the season on Thursday against SMU. Think these guys are going to get up for a Noon kickoff against UConn? Absolutely not.

Get me 3 touchdowns AND the hook.

I’ve been thoroughly impressed with Illinois this season. They’ve shown fight in almost every game. They made a comeback on Michigan last week and almost stunned Nebraska a few weeks ago. I think they keep this one closer than it should be. Feels a little bit like a 35-14 game if you ask me. 31 points is way too many to be catching at home for me to pass up on.

Jacob Eason has been disappointing, there’s no doubt about that, but I think the Huskies may have found their stride late in their game against Arizona last week.

Oregon’s defense will be a test for Eason, but I still see the Huskies coming out on top. This screams of a classic Pac-12 eats their own game. Oregon is hot and the Pac-12’s last hope for a playoff bid? Oh shit, here’s a loss to Washington.

Sports betting is a lot like Wall Street. What’s the #1 rule of Wall Street?

Putting aside the chance they beat Alabama in T-Town, LSU’s stock will never be higher than it is right now. My sister, who hasn’t watched a full college football game since UConn-Cincinnati in 2013, is probably going to bet on LSU this weekend. That’s how HIGH they are right now.

I don’t have to tell you how low Mississippi State’s stock is. You already know it. Big T rang a cowbell in Brandon Fucking Walker’s face last weekend.

This is your buy low, sell high game of the week. The cowbells are going to keep this bad boy close.

According to FEI, Baylor is a top 15 team in the country. Oklahoma State ranks 31st. Baylor pulls in 16th in SP+. Matt Rhule has his hands on a VERY good football team. This line is pretty much saying that Baylor would be an underdog to Oklahoma State in a game played on a neutral site. I completely disagree with that notion.

Baylor wins this game outright, but I’ll be taking the points to be safe.

P.s. How about the Baylor Bears? If they win this one and then take care of West Virginia and TCU, they’ll be hosting Oklahoma on November 16th. That could be a game of undefeated squads.

How many more games does Herm Edwards need to win before we start putting some RESPECT on the mans NAME.

He has himself a top 30-35 football team with one of the most dynamic Freshman QBs in the country.

They took down Wazzu last week at home and now will travel to Utah. I’d love to get this number at 14, but have NO issue betting it at 13.5.

Watch out for the Sun Devils, Utah. Herm’s coming. He’s going to leave it ALL on the grass.

Michigan reestablishes themselves as a CFP contender this Saturday night.

Big Cat is calling this James Franklin’s “fuck you tour.” I think this begins the Jim Harbaugh fuck you tour.

Michigan wins. Runs the table and finds themselves in a de facto Big 10 championship game against Ohio State.

Rice shouldn’t be favored in any game, especially one on the road.