Nothing like a little world class soccer on a Tuesday/Wednesday afternoon to break up the monotony of filing TPS reports. I’ll try to keep this blog brief and to the point because there is a lot going on this midweek with MLS playoffs and what not, but before we do anything let’s sit back for a moment and let these sweet soothing sounds bathe our eardrums in soccer sumptuousness:

Useful rule of thumb: if your club is on zero or even one point after this third round of games they are basically fooked so plan/cheer accordingly… a fate that a number of favorites to advance are staring down the barrel of at the moment (looking at you Real Madrid, Tottenham and Inter Milan)

As for the games on deck, this is what we are looking at this week: 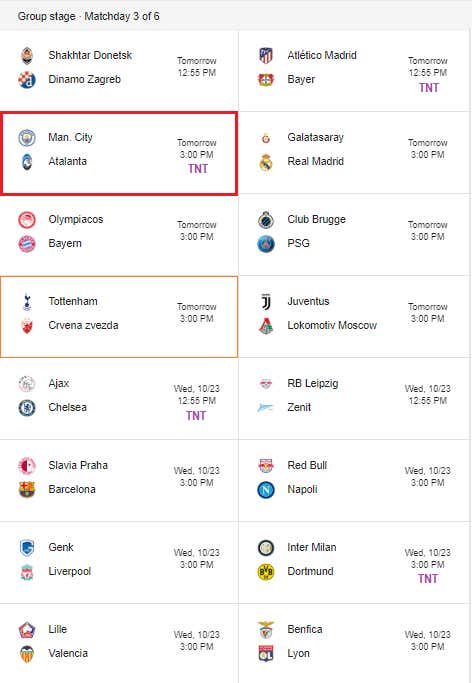 Call me crazy but this matchup feels like a more competitive game than the odds would suggest, if only because (1) Atalanta are quite good and (b) they shit the bed the first two matchdays and desperately need some sort of result today. The club – last season’s breakout success from Serie A – is again a lot of fun to watch but their defensive frailty has too often been their downfall. City has issues of their own at the back, which is why if I’m betting any moneys on this it is going on the OVER… but I’ll say City to win 4-2.

There is a reason their entire midfield is on the list below, after all (even if I still suspect that Riyad Mahrez was accidentally copied+pasted with the rest of the group)

Spurs have been quietly in freefall for what feels like years, but apparently has only been months – though you could argue the ass-whooping from Bayern in UCL a few weeks ago is what really laid bare how bad things have gotten. Harry Kane has been a shadow of his pre-ankle injury self. The team’s full backs just plain suck. Poch’s favorite CB duo of Jan Vertonghen and Toby Alderweireld aged 10 years in 10 weeks. Christian Eriksen apparently hates the club so much he’s itching to go join Real Madrid’s traveling clownshow (an extra couple hundred thousand quid per week can do strange things to a man’s brain). Dele Alli appeared from his season-long sabbatical to score against Watford this weekend but who knows if he is planning on sticking around. And Hugo Lloris took a break from shipping horrendous goals to dislocate his elbow. But at least they are playing like trash in an incredibly beautiful new stadium, so that’s p cool! 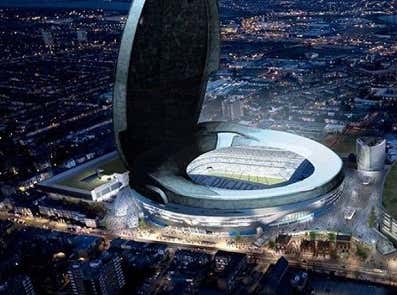 So that is the situation as Spurs are staring at a five-day stretch where they have to play Red Star and Liverpool. Losing both could potentially cost Mauricio Pochettino his job. I wouldn’t agree with that decision, personally, but public pressure is bout a bish sometimes. Chances this club in this form can find a way to scrounge a result AT ANFIELD on Sunday? Meh, probably about 2%. That makes today’s game against the Serbs an absolute must-win.

Red Star ain’t no slouch. They got a little fortunate in beating Olympiacos last time out, but a 3-1 win is a 3-1 win and they have been on cruise control in their domestic league so should come in well rested and in good form. (A lot of people will of course also remember them beating Liverpool last year, though I’m not a big believer in looking at results in previous season’s given all the change-over in squads these days.)

I have absolutely zero clue what XI Poch will go with. His lineups have been all over the place but I am praying we have seen the last of the Winks/Sissoko midfield partnership where creativity and offense goes to die a slow, painful death. At some point Spurs have to play at least a little good soccer again, right? Right??? I donno, maybe not, but I’m going with Spurs to win 2-0.

Note: I don’t often hit the panic button, in fact I’m not sure I have done so once in the 5+ years I’ve been blogging for Barstool, but if Spurs lose today I’m smashing that muhfugga.

• Shakhtar 1-2 Dinamo – Both teams beat Atalanta and lose to City so not a lot to differentiate the sides but qualitatively I have been more impressed watching the Croatians so I’m going with them.

• Brugge 1-1 PSG – Let us not forget how solid Brugge looked in the Bernabeu against Real Madrid last matchday, going up 2-0 before hanging on for a draw. Defensively they are very solid and at home I don’t mind going out on a little limb (again) with the pesky Belgians.

• Atletico 1-0 Bayer – Don’t expect a lot of goals in this one as Bayer have looked anemic lately and that’s just what happens when Atleti play at home in Champions League.

• Galatasaray 1-1 Real Madrid – Luka Jovic was supposed to add some spice to Madrid’s attack this season but has been a massive disappointment. Something similar could be said about Eden Hazard. This team has tons of talent but just haven’t put it together yet, and time is running short for Zidane who may be in a similar situation as Pochettino at Spurs. I’m not calling Madrid dead yet because as soon as I do they will win the Champions League… but I’m just politely pointing out that maybe they are just an expensive Tottenham.

• Olympiacos 1-2 Bayern Munich – I was not all that impressed by Bayern coming into the game against Tottenham a couple weeks ago but I am not ashamed to say that I am still suffering the after effects of PTSD after watching Ze Germans bury every half chance they saw into the bottom corner or upper 90. Somewhere deep down in my soul I’m still not 10000% sold on this Bayern squad but I’m sold enough to take them over an Olympiacos team that has been a big disappointment so far in UCL. (They recently got dominated by Spurs for 95% of the game for heaven’s sake!)