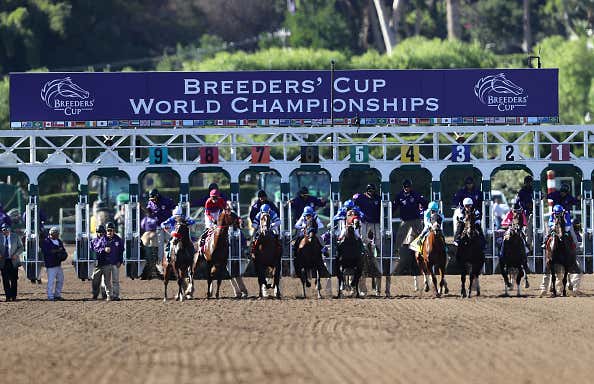 That tells me that the reforms instituted by the stake holders at the track and the owners, The Stronach Group, are working. Oftentimes in life things take some time to go into effect. The reforms at the track are no different. Riders are using a safer, foam tipped crop. Lasix is no longer allowed on race days and is being phased out completely, as are other medications. The horses are examined by three separate veterinarians to ensure fitness. Several horses of big name trainers were scratched on Breeders’ Cup day because of those veterinarians. The track administration has said they will examine switching to a synthetic surface for the next season. These are all good things that will make racing safer.

Yet, as soon as Mongolian Groom pulled up in the Breeders’ Cup Classic Saturday night, we all knew what was coming. People who know virtually nothing about the sport or the people and animals involved in it would be calling for it to be banned. Sure enough that’s where we are today. It’s bad enough that we have people like Sarah Spain writing ridiculous tweets like this:

Horse racing is abuse? I’d like to know how so? Because of the use of the crop? Is that what is so disturbing? We could argue about that all day long, but if the riding crop was so “disgusting” to Sarah Spain, I suspect we would have been hearing about it before today. No, rather, I would guess she is referring to the deaths of horses as abuse. Let’s be perfectly, crystal clear here. I love the sport and I love the animals. Nobody who feels the way I do is flippant about the safety and care of these horses. We also understand that thoroughbred horses as a breed likely would not exist if not for horse racing, as that is the singular purpose of their breed. Further if this was really an issue Sarah Spain cared about and not just another hot take to fire off on twitter, she would do some research into what the track has done since suspending racing earlier in the year. The result is far fewer deaths. But, hell, it’s a lot easier and more fun to just fire off hot takes without really knowing anything about what you’re talking about.

As I said, Sarah Spain would be bad enough, but people with actual importance, actual significance, actual power, are doing the same thing. This was from United States Senator from California, Diane Feinstein:

I have no issue with Senator Feinstein making herself part of this situation. As a Senator from California that is her job. I actually applaud her wanting to make sure this industry and the animals and people involved are as safe as possible. The problem is, she is falling into the same trap as Sarah Spain, and just spewing “tough talk” to gain political points. When she says “More than 3,000 horses have died at California racetracks in the past two decades”, that is a telling statistic. It sounds awful, but in reality, it’s not. First, there is racing in California almost every single day of the year at one track or another. Second, California has actually lost race tracks in the last twenty years, so there could have been even more horses running than now. Also she offers no breakdown of when those deaths occurred. I’m willing to bet that’s a heavily backloaded statistic, with far more horses dying twenty years ago than today. Even if it is an even distribution it breaks down to about 1 per month. While it is tragic whenever a horse dies, that is hardly the staggering statistic she portends it to be.

Further my issue with the Senator is that she could be more hands on here. If this was truly important to her and not just a hot button issue, she surely could have attended the Breeders’ Cup weekend. I’m absolutely certain that The Stronach Group would have loved to host Senator Feinstein and show her the reforms made. Perhaps if she witnessed the horses being inspected and tested. Perhaps if she had a chance to speak to the veterinarians and trainers involved. Perhaps if she walked the surface herself, she would have a different view. But again, rather than truly immerse oneself in the issue it is easier to throw rocks from afar.

Accidents happen in horse racing. Thoroughbreds are exceptionally delicate animals. Anyone who has seen one up close knows that. I don’t know if Senator Feinstein or Sarah Spain have ever walked around the back of a race track, but I would suggest that before advocating for shutting down an entire industry that would effect tens of thousands of animals, people, and cost multiple economies millions of dollars, you learn as much as you can about the sport and the people you aim to condemn.