It’s Wednesday. Weather sucks. TPS reports piling up. Weekend is but a sliver of light at the end of a Red Star Belgrade-like tunnel

I know the feels. Thankfully we got CHAMPIONS LEAGUE gloriousness to take the edge off for a couple hours.

Public Service Announcement: yes, I know, some of you are only here for the picks today… but hear me now and believe me later: the time to fade me is right now. You’ve been warned.

But before any of previewing and prognosticating, let’s take a moment and bathe our eardrums in the sweet sounds of soccer sex to set the mood: 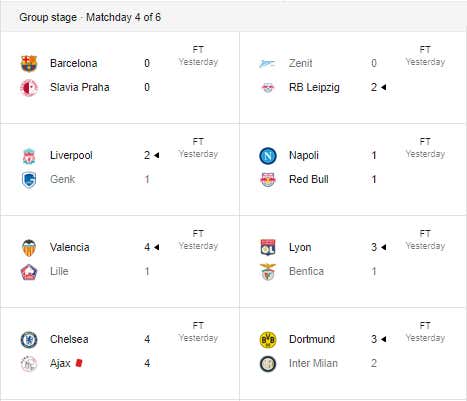 And the games on deck today: 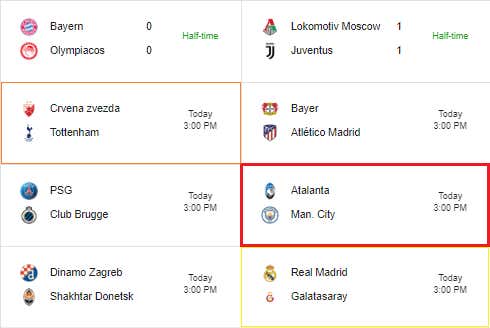 City just beat the living bejesus out of the Italians in Manchester two weeks ago. Why would it be any different this time? Well, for one thing, anybody who saw City play this past weekend will have noticed they were not looking great. Maybe it was a stretch of games against Villa and Southampton (twice) that caused them to take their foot off the pedal? I’m not sure, and of course they have the talent to beat just about anybody… but Hotalanta don’t want this game – they NEED this game. Gimme the desperate team with the big fat top-shelf-liquor-tonight odds all day. Atalanta to win 2-1.

Big game for both clubs to determine who gets to be the little spoon to Bayern’s Big Spoon and get out of the group. (Having said that Ze Germans are without a coach and currently stuck in a 0-0 game against Olympiacos which kiiiiiiiiinda opens the door for somebody to catch them… buttttt probably not [UPDATE: especially since they went on to win 2-0].) Anyway, back to Spurs/Red Star. Belgrade have a legit home field advantage. They beat Liverpool right about this time last season and the Reds were and are a fair bit better than Tottenham. So do I love Spurs? Yes and no. Yes in a big picture sense but today I do not because the club – regardless of what Pochettino may say – is not in a great spot and the performances have been hugely up and down… and more down than up if we’re being honest. In fact I had originally picked a DRAW in this game but Poch finally –mercifully – decided to drop Eriksen to the bench in favor of Lo Celso, which caused me to make a last minute change. Tottenham to win 3-2… and if you ain’t betting the OVER (given how shite Spurs’ defense is) then you must hate money.

Madrid just settled for a home draw (scoreless no less) with Betis this weekend and things in the dressing room have been and will remain in a constant state of turmoil until the club makes some major personnel moves – notably letting Gareth Bale go somewhere he is not despised. I had a bad feeling about them going to Galatasaray last matchday and they were not terribly impressive, and in fact were easily out-possessed by the Turks, but they were highly efficient when they did have the ball managing to outshoot their hosts 26-11 (and 12-3 on target). Bottom line is I am not a huge fan of where the club is right now but doubting them at home in Champions league against a Galatasaray side that is not anywhere near as good as some previous years… yeah, I’d say doubt Los Blancos at your peril. Real Madrid to win 3-1. 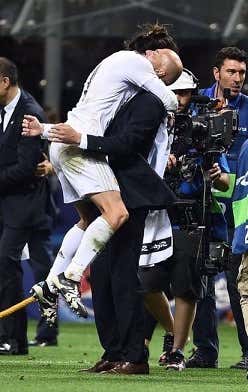 • PSG 1-1 Brugge – I trust these Frenchies about as far as I can throw them and just a quick reminder I played soccer so my biceps are naturally tiny and Brugge have been KILLING it domestically. I know, I know, PSG whipped them 5-0 at the Belgian’s place of business a few weeks ago… but like I said, I just don’t trust the frogeaters. They just lost to a fucking condiment this past weekend, for gods sake.

• Bayer 2-1 Atletico – There’s no good reason to pick the Germans in this one given their middling form lately but Atleti have been pulling games out by the skin of their teeth and it is going to catch up with them eventually.

• Dinamo 2-0 Shakhtar – Huge game with both clubs on four points. Only big difference I can see is the Ukrainians are missing a bunch of starters to injury. So that plus game being in Croatia make this a no-brainer.