So yesterday was quite the day for the Wolfpack up here in Toronto. We began the day driving up to Woodbine, which for those who may not know, is a casino/racetrack outside of downtown Toronto near the airport. We made the thirty minute drive or so and arrived at Woodbine and successfully entered the building before Paul and Big T froze their asses off. 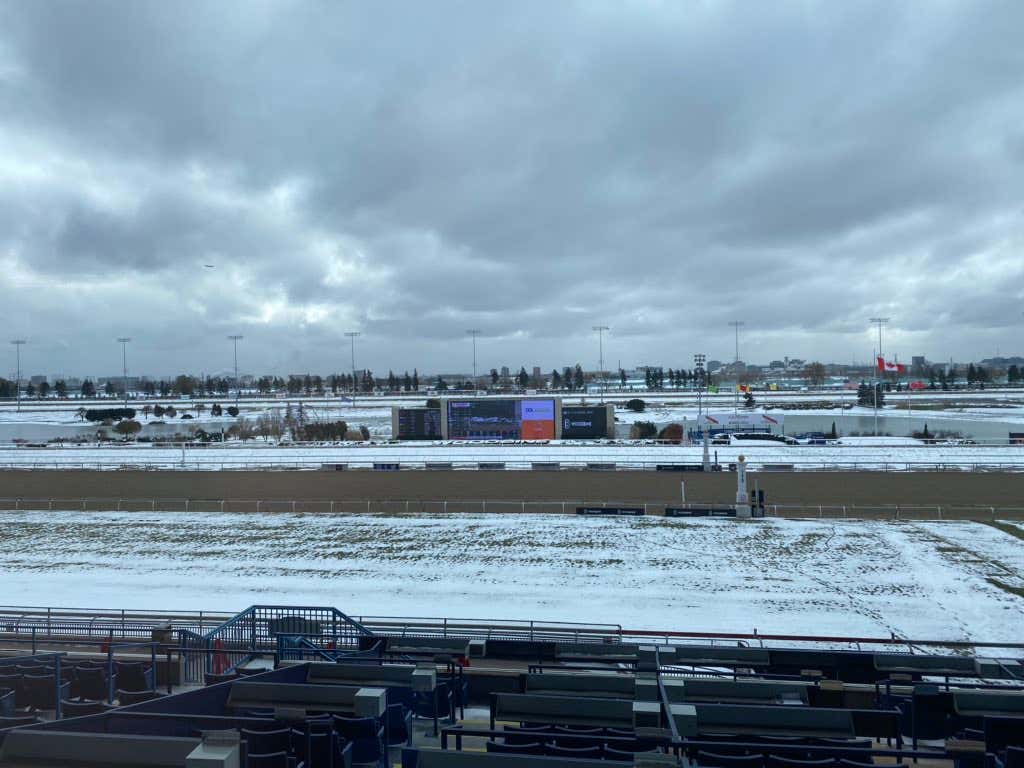 Now that may look a little grey and dreary, but Woodbine is actually a really beautiful, clean, well maintained facility. We grabbed some seats and began to handicap the card. Paulie and I put together a Pick Five beginning in Race Two, and I helped Big T bet the first race. We settled on an 5,6 exacta box and the Big Orange Bastard punched his first ever racing ticket, which turned out to be a $50 winner for the big guy.

Needless to say, Big T was very excited about being up after Race One. As we began our Pick Five, things started to roll pretty good for us, until the fourth leg, when we fell short by a neck. Needing some more action before we left for the Tennessee game, I decided to throw out there a late Pick Four at Aqueduct and a late Pick Four at Woodbine.

Now, I was able to watch the first two races of Aqueduct while we were still at Woodbine, so I knew I was alive when we got in the car. We proceeded to do a live stream from the car as the last race of the Aqueduct Pick Four was coming home.

Honestly, I couldn't believe I hit for $700. It was a solid bail out and I was pretty pumped to have hit my seventh Pick Four in seven days. It sent us into the Scotiabank Place on wings of angels. Tennessee controlled the game from start to finish and the outcome was never really in doubt. Which made it surprising when Big T grabbed some "rally cotton candy" at halftime, but to each his own.

As the UT game was wrapping up, I was hitting yet another Pick Four. This time at Woodbine. This was eight in seven days. That is unreal. A heater that is unprecedented. So I banged out a quick video from Scotiabank and got a quick chirp in at that loser Rico Bosco.

Shortly after that UT finished off Washington and we headed out to meet up with our Canadian Stoolie friends for drinks and shenanigans.

Now today we head to Hamilton, Ontario for the Eastern Conference Final between the Hamilton Tiger-Cats and Edmonton Eskimos. Winner advances to the Grey Cup next Sunday in Calgary. I can't wait. Our new Canadian friends are coming. We're tailgating. It's going to kick ass. Follow us online for updates throughout the day.