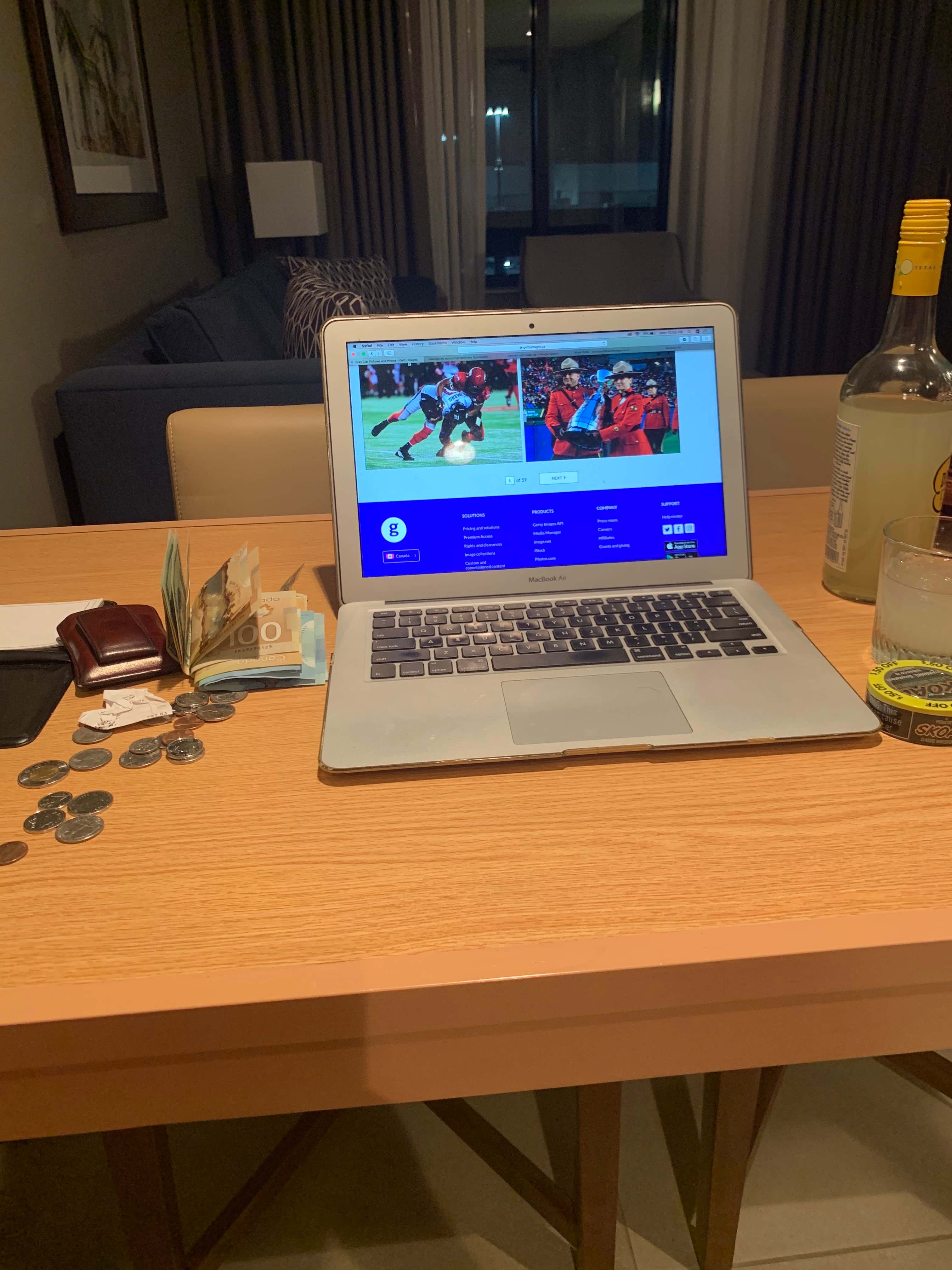 This has been one hell of a day. As I sit here in my hotel room writing this at nearly 11pm, I am reflecting on the day we have had and the days we have ahead. I'm blown away. The day began in Toronto, Ontario, Canada, with the Wolfpack planning to depart and return home to New York. It was a dreary, rainy morning in the six. We had a great time in Canada and were sad to leave her. We had made great friends and had an amazing time at the CFL game on Sunday. When out of the blue Canadian Steve texted and informed us that his friend in the Ti-Cats front office had invited us to attend the Grey Cup and the official team party as their guests. We forwarded this information to HQ and were overjoyed when were told that Dave said to go proverbially "Go west" and attend the Grey Cup. Paul and I literally hugged each other in the car. Big T got in moments later and was so happy he was in disbelief and immediately texted his Grandma (she's awesome btw). We mapped out an itinerary that would take us across country and arrive in Calgary by Friday to partake in all of Grey Cup weekend. We would have to hook back through the U.S. so we planned stops in South Bend, Indiana and Minneapolis on Monday and Tuesday nights, respectively.

As we got rolling west of Toronto we did what we always do; start singing. People have asked what we talk about in the car for seven hours at a time, it's mostly music. Obviously there's sports talk from time to time, particularly as we get close to games starting in the evening, but it is mostly music that carries the conversation. So the singing began, and the recording began and the tweeting followed shortly thereafter.

(Also I'm not sure what is more shocking: That Big T doesn't know Mmmbop or that Paul hasn't gotten us into an accident yet.)

As we were in line at the border crossing to come back into America, Paul mentioned that the Bieber song "Love Yourself" reminded him a lot of Rico Bosco. Big T and I looked at each other and immediately he began writing. Within twenty minutes, he was ready. He performed the first version and it was perfect. He was ready. It was showtime.

The song was amazing. His vocals were perfection. Everything worked. It just worked. Buoyed by this new hit single, we cruised through Michigan and into Indiana when Smitty texted me and asked if we would call into radio to update the listeners on our trip. Of course, we obliged. While being introduced, Tommy mistakenly referred to us as the "Ratpack", I'm hoping that was an honest mistake, that's what I'll attribute it to at this point. After being corrected, Paul ranted, Big T sang and I explained our motives and the purpose of our trip. It was a typical Wolfpack interaction. We left and went into a gas station where we bought some dip, cheese and sweet sweatshirts that we will debut today.

After arriving in South Bend, we hustled over to the Notre Dame game where Paul and Big T had the Irish -26.5 and I had over 136.5.

Unfortunately the game was less than thrilling and neither bet cashed.

We went and got some dinner, I can't quite remember what we had...either way, I grabbed a bottle of vodka and here we sit. This has been an incredible day, a ton of fun and I can't wait for what tomorrow has in store. We are driving through Indiana, Illinois, Wisconsin and into Minnesota. I've never been to Minnesota or Wisconsin, so I'm pretty pumped. We will keep you posted on social all day long so make sure you stay tuned. You never know what'll happen with the Wolfpack on the prowl.