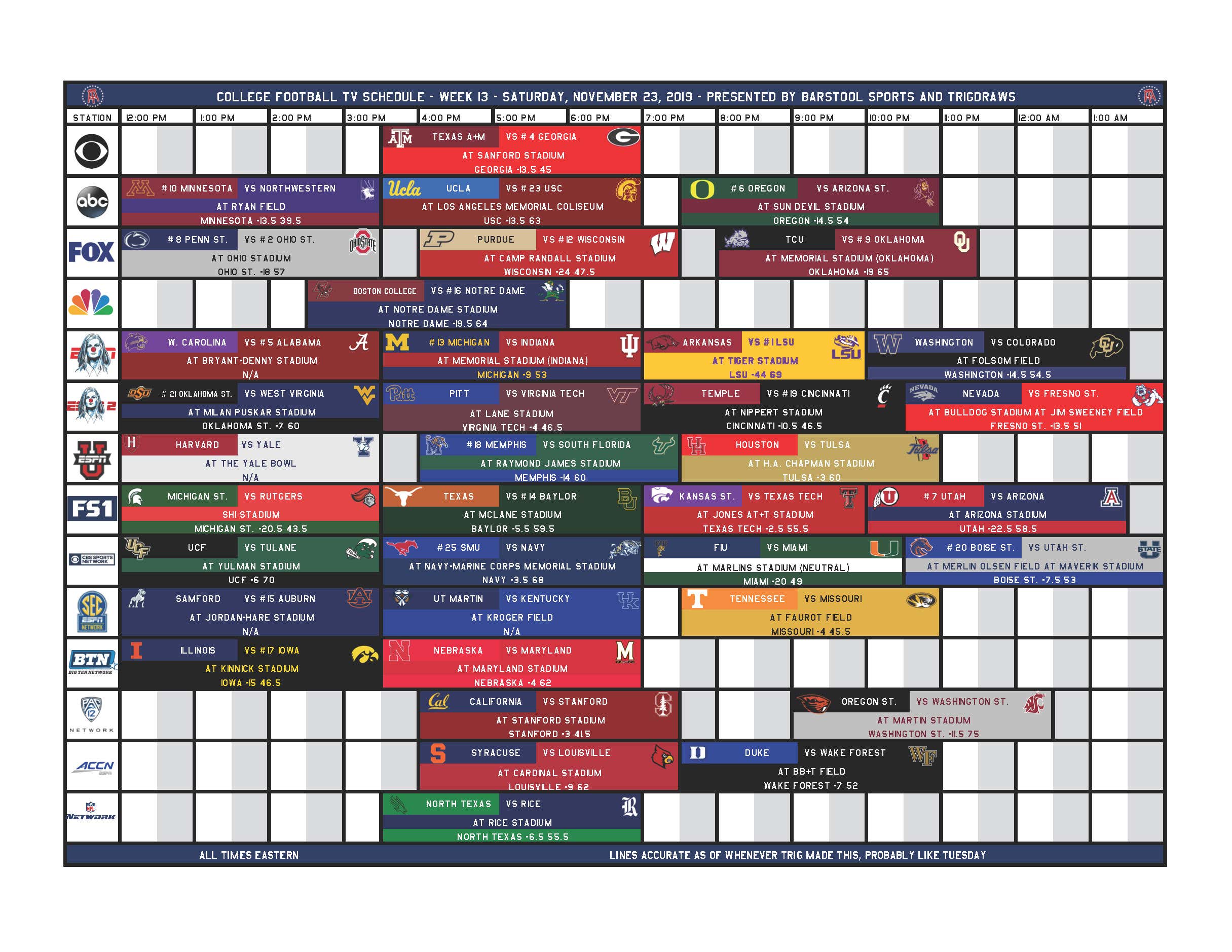 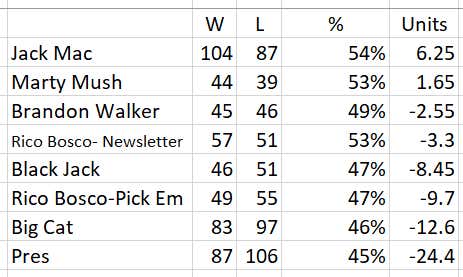 I. Can't. Stop. Betting. Northwestern. This spot is perfect for Northwestern. Getting 2 TDs at home in a game with a total of 39.5. Minnesota's QB Tanner Morgan is in concussion protocol. The Gophers are coming off a heartbreaking loss last week and they have to play a disgusting Northwestern team a week before their Big 10 West championship game against rival Wisconsin. Give me the Wildcats. Pick: Northwestern +14

Michigan is a buzzsaw right now. Since the 2nd half against Penn State, Michigan has outscored their opponents 148 - 38. That has included wins over Michigan State and Notre Dame. The offense we hoped to see earlier in the season has finally gotten going. This is a lookahead situation for them, but I still think they take it to Indiana tomorrow, who is without their top WR Whop Phiylor. Michigan has the defense to slow down anything Indiana throws at them. Pick: Michigan -9.5

Syracuse was a mess going into their bye. They were blown out by Boston College by 31 (!!!!) at home. The good news for the Orange? The bye was exactly what the doctor ordered. Last week, Syracuse destroyed Duke 49-6. They sit at 4-6 and have their bowl hopes alive going into this matchup against Louisville. They have every chance to score on a Louisville defense that ranks 83rd in the nation. Their defense took a huge step forward last week with the return of DT McKinley Williams and DB Andre Cisco. Pick: Syracuse +9.5

ECU's heart was broken last week. They were within a TD of beating SMU and keeping their bowl hopes alive, but thanks to a loss, they sit at 3-7. Now, to follow it up, they have to travel to UConn and play at Noon in 40-degree weather. It's senior day tomorrow for UConn. They have a shot to win this game. I expect a fired-up UConn team tomorrow with Steven Krajewski returning at QB. Give me the Huskies. Pick: UConn +14.5

Herm getting 2 TDs at home in a primetime game? GIVE ME THAT. Arizona State is a good football team. They rank 42nd in SP+. This is their biggest game of the season and will have the opportunity to ruin Oregon's CFP hopes. Jayden Daniels is a GAMER. Herm Edwards is a GAMER. Weird things happen in Tempe when the sun goes down and the lights get turned on. I could see this coming down to the final drive of the game for Oregon. Pick: ASU +14

When you look at LSU's blowouts this year, you'll see Vanderbilt put up 38 on them and Ole Miss put up 37. This may give Arkansas hope that they'll be able to put up big-time points on the #1 team in the country's defense. The only problem? Arkansas is AWFUL on offense. They rank 104th in FEI offense and 96th in SP+ defense. They are awful in the redzone, ranking 120th in scoring percentage and 110th in touchdown scoring. LSU's defense was embarrassed last weekend in Oxford. They're going to come out ANGRY and may pitch a shutout against this anemic Arkansas offense. Pick: Under 69

When you look at UCLA's final score last week, you'll see a team that got blown out. However, once you dig in a little bit deeper, you'll see UCLA had every opportunity to stay in that game. They scored only 3 points in 4 red zone appearances. They were going into score a TD late in the 2nd to make the game 14-10, but a fumble resulted in a 90-yard return for Utah. Another few failed red zone attempts in the second half resulted in the defense losing all hope for any resemblance of a game against Utah. My hope is that UCLA will take the good from that game and take it into their crosstown rivalry against USC. I'm a big fan of DRT:

And could see him putting up points on the Trojans. He just has to hold onto the damn ball and not throw any ridiculous interceptions! Give me the Bears. Pick: UCLA +13.5

Louisiana-Monroe is the better team in this game. They rank higher in both SP+ and FEI. It's senior day in Monroe tomorrow and they'll be fighting to keep their bowl hopes alive. I see them winning by 10 over Coastal Carolina, whose only win since September has been a 1-point victory over Troy. Pick: ULM -5.5

Rice is just not a good football team. They rank 121st in FEI and 123rd in SP+. North Texas comes into town tomorrow with a returning Mason Fine and the need for a win to keep their bowl hopes alive. Give me the MEAN GREEN. Pick: North Texas -6.5