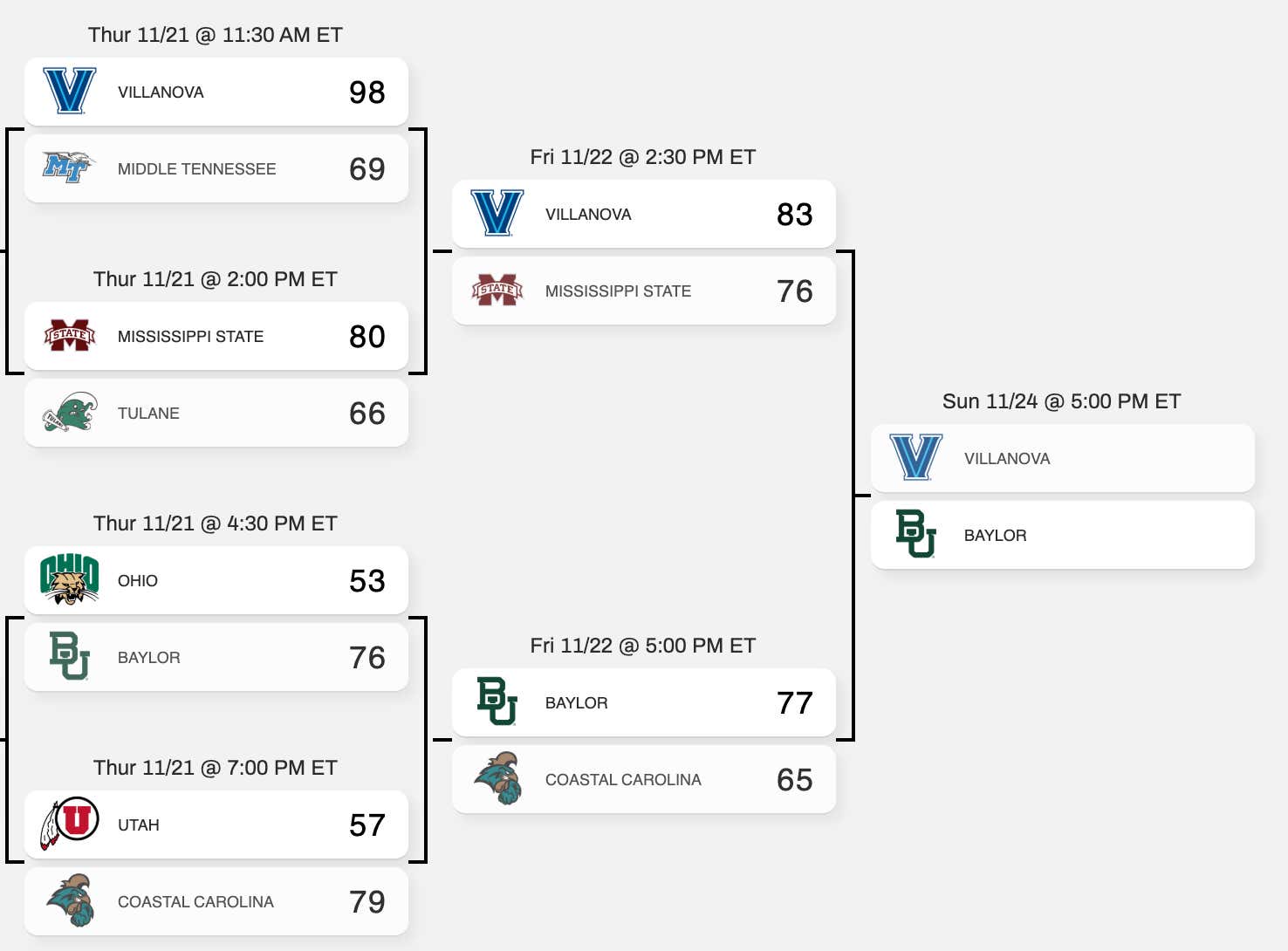 Thoughts: This was such an important start for Nova. They shot the absolute shit out of the ball against MTSU and beat a Mississippi State team that could give them troubles with a guy like Reggie Perry going against JRE. They'll get a unique look against Baylor with the ability to run zone or that amoeba zone and have a bunch of versatile guys. I'm personally not touching this game because of that, but wanted to talk about a top-25 matchup that people will forget about because of the NFL.

I'm a bit confused by this line as it feels at least 3 points too low, even for a road game for Mississippi State. CCU hung around with Baylor for a little, but they also shot 9-for-14 from three in that game. After they made it close, Baylor just did what high major teams tend to do. Use the athleticism and attack them in the paint and finsih with ease. Why I actually really like Miss State here? They are the 2nd best offensive rebounding team in the country and the biggest weakness for CCU is defensive rebounding (they rank 260th in the country). That just screams some free points for the fighting Brandon fucking Walker. Also, Ebrima Dibba got hurt in the second half against Baylor so who knows where he is with health. 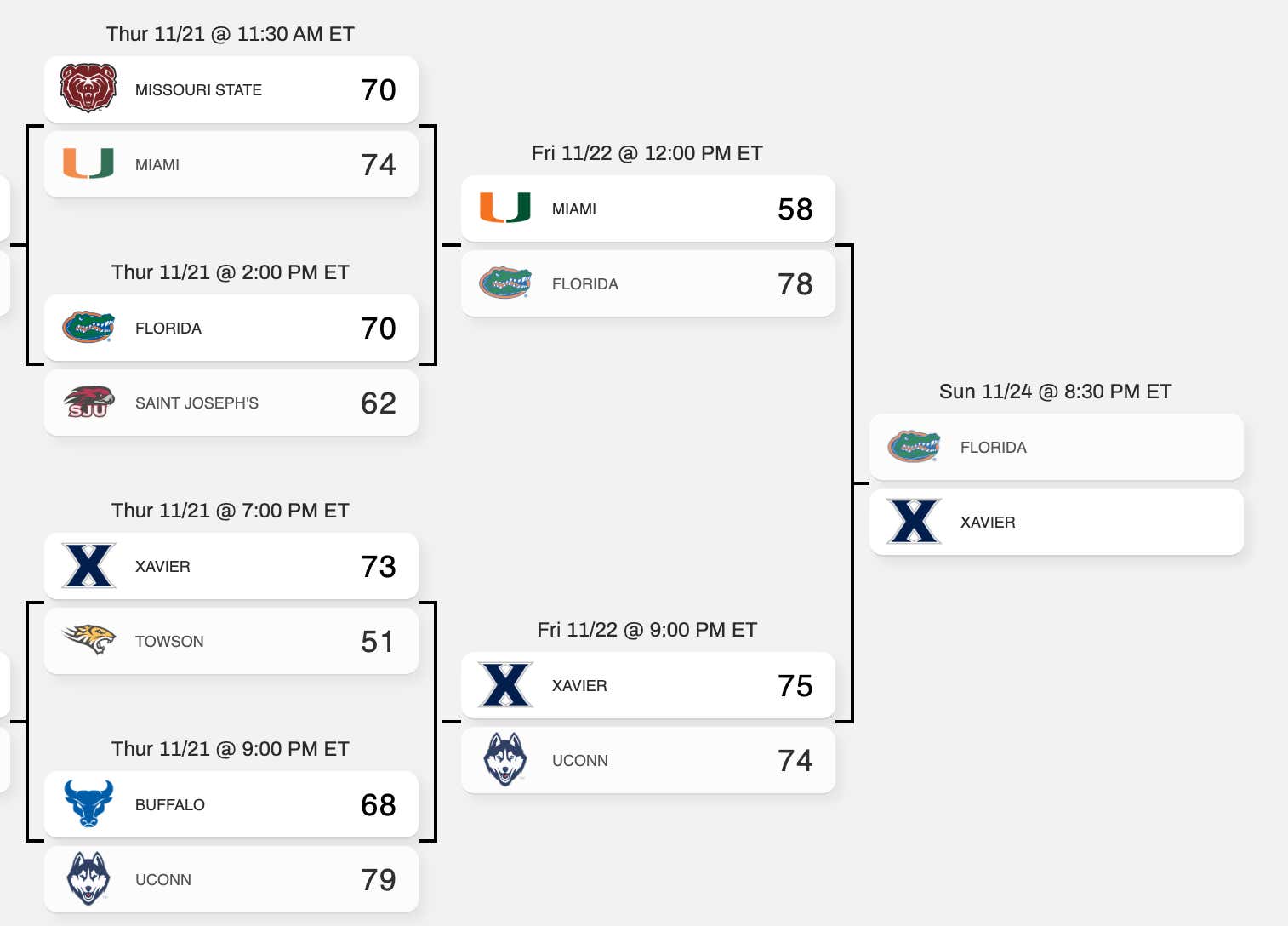 Thoughts:  I'll talk about Florida/Xavier here in the picks section but I have to say I've been wildly impressed with UConn in this tournament. That's right UConn fans, I'm saying something nice about your team. The fact they followed the win over Florida up with a win over an okay Buffalo team and then played a top-20 Xavier team to a 1-point loss in overtime, which really was as close as it sounds. That's been the biggest thing for Danny Hurley this year. He said he wants to get these guys to learn how to win again. Now, I think they are a year away still, but this was an impressive few days.

So all that talk about UConn being impressive for a few days? All true. HOWEVAH, Miami is now getting 2 points in this game in a game that opened as a PK and I think Miami might be a tad better. I actually think Miami's backcourt can match UConn's and then Miami has a couple big guys to throw at Carlton. Throw in the fact that UConn is coming off a 2OT game and I'll take the free points here.

Another pretty fucking good game for a Sunday in college hoops to get us ready for Maui and Atlantis. Florida NEEDED to get to this title game after a 2-2 start. More importantly they needed to start showing they actually knew how to run an offense. They started shooting the ball better which means they can run a 4-out offense around Kerry Blackshear. Yes, both teams are great defensively and have shot the ball like shit this year. Yes, Xavier fans went nuts when they finally scored 70 points. But, we're just looking for in the 60s in this game for a win.

Virginia's defense is just a machine, man. You know what doesn't bode well against a defense like that? An offense that wants to play fast, not shoot the ball well and really relies on getting in transition. Now, I do think Virginia's offense is a bit weird this year as they have to move on from one of the best PnR guards in Ty Jerome and then just studs in Kyle Guy and De'Andre Hunter. But Virginia is going to control tempo in this game and I firmly believe Arizona State is the exact sort of team that beats up on bad teams and loses to good teams. Virginia is a good team.

Nevada still seems to be a bit disrespected by Vegas after the small favorite over Fordham and now Valpo. This game is lowkey going to be a lot of fun. Both teams want to fly around the court on offense and get a bunch of shots up. In a game like that I trust the two Jazz Johnson and Lindsey Drew from Nevada. I don't love how many favorites I'm on today, but sometimes it is what it is. Also, Valpo's 3pt defense is a bit horrendous and Nevada is a decent shooting team.