The penultimate week of the regular season came around in Week 12 with much still to be determined in the Barstool Fantasy League. The top seed in the playoffs as well as last place in the league are still up for grabs with just two opportunities left to put yourself in a position to achieve fantasy glory. Let's see how it all shook out.
Breakfast Plus Balls (10-2) 124.18, Hank (5-7) 94.02 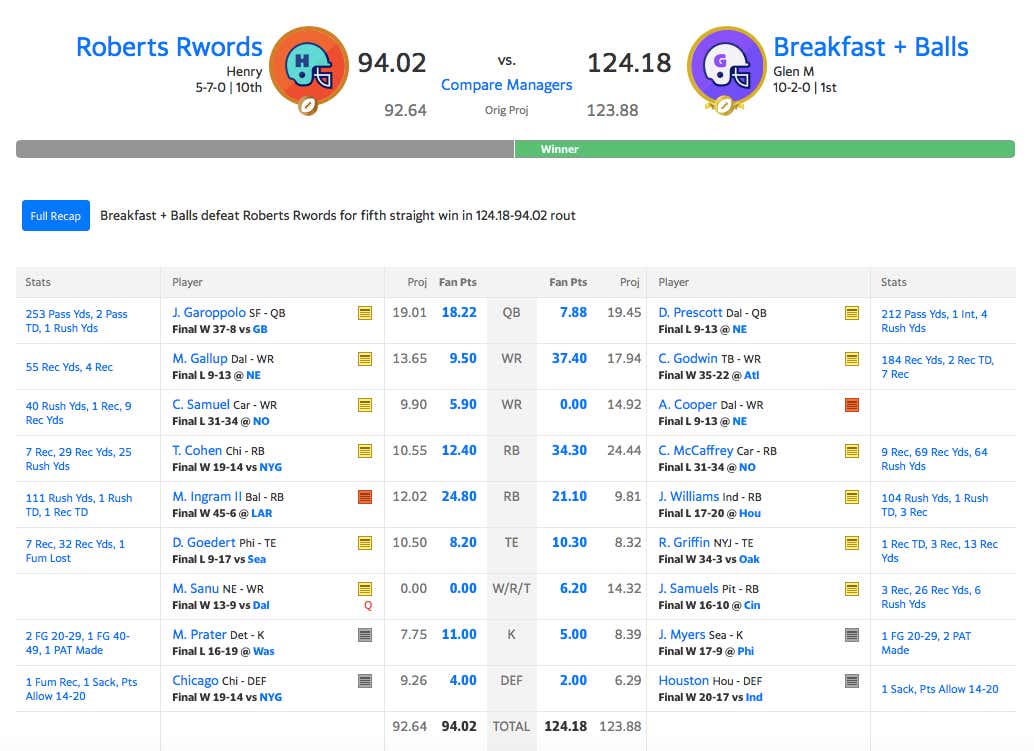 Tied for the top seed heading into the week, Glenny and the Breakfast Gang needed a win to either keep pace or surpass PMT. Well, when you have Chris Godwin and Christian McCaffrey go for a combined 317 yards from scrimmage and 71.70 fantasy points, it goes a long way towards doing that. Even with a solid performance, Hank drops this one and guarantees a losing record for the year.
LCB (5-7) 131.28, Pardon My Take (9-3) 119.54 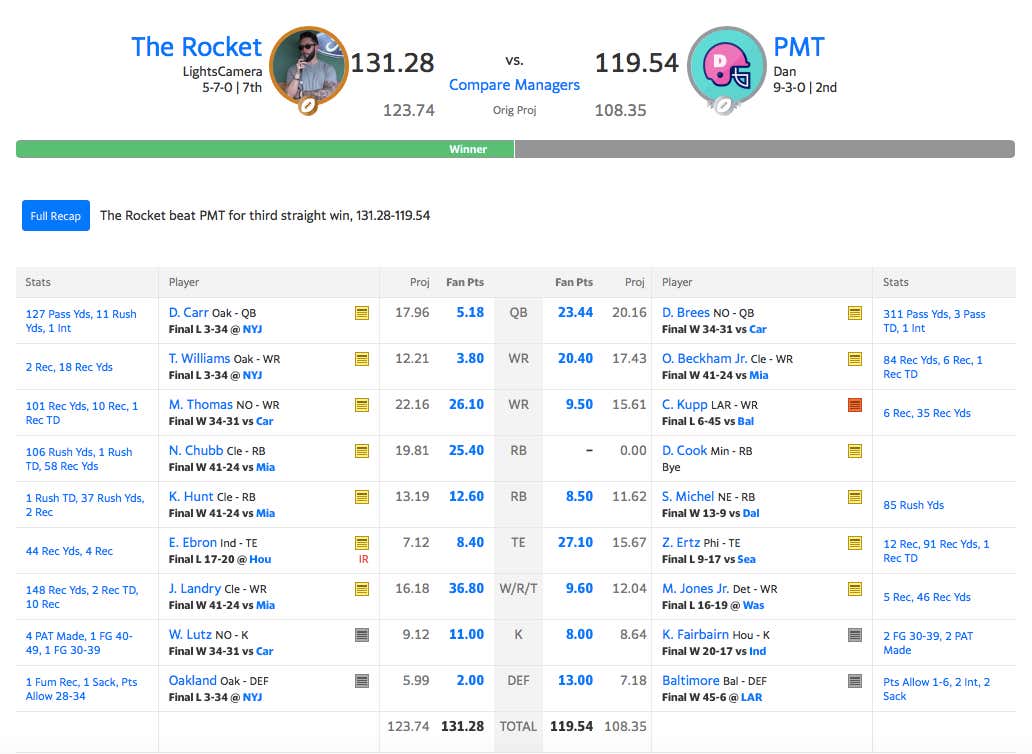 Upset of the year? LCB came into this one in last place taking on one of the two powerhouses of the league and came away with the W. Sure, you could point out that PMT was down a running back, but they've been down more than one player many times before and still won comfortably. Huge dub for the movie boys.
Clem (5-7) 136.46, Big Rat Walkbags (5-7) 88.06 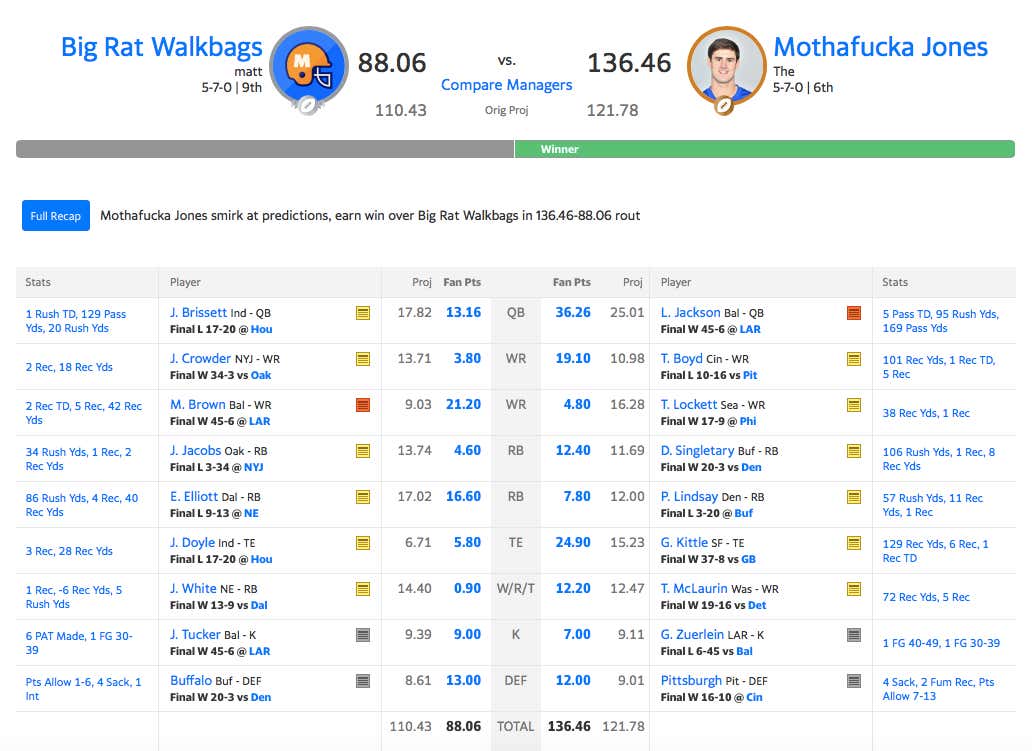 Clem has reminded me multiple times of my criticism of his Lamar Jackson pick and I'm sure this week he will take the opportunity to do that again after Jackson's five-touchdown performance on Monday Night Football. Combine that with a resurgent game from George Kittle and a 100-yard performance from Tyler Boyd and Clem ran away with this one.
The loss by the Walkbags drops them into the plethora of 5-7 teams which will be fighting for just a couple playoff spots in Week 13.
Coley (5-7) 110.68, The Baseball Boys (4-8) 107.26 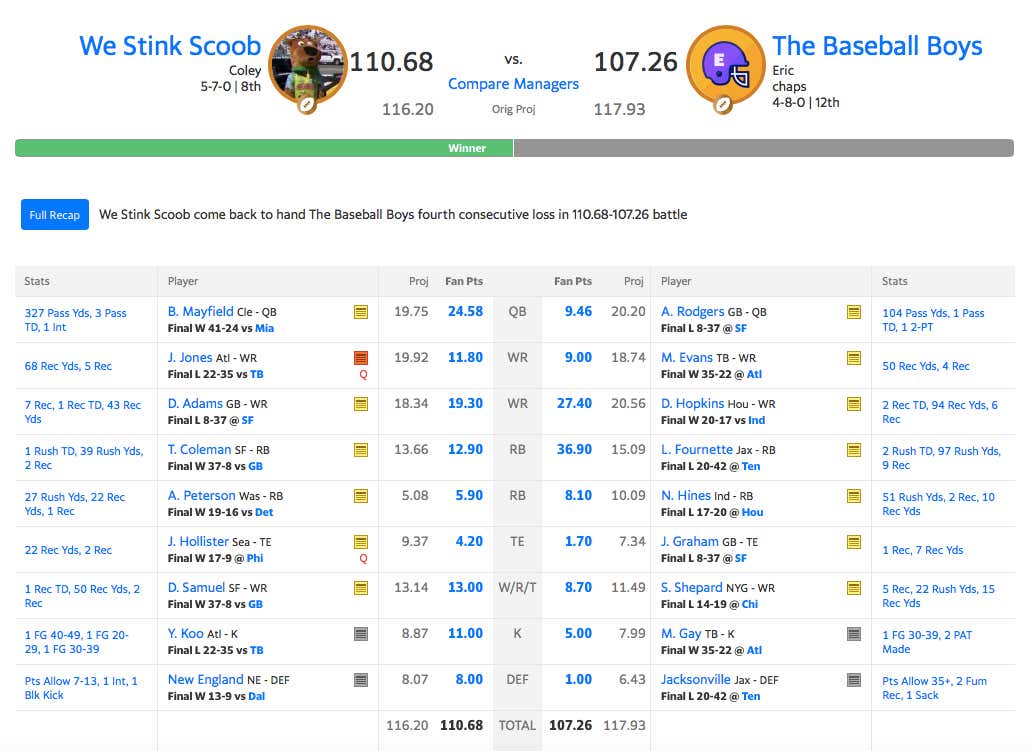 With both teams at 4-7 coming into this matchup, it obviously has massive implications on who could end up in last place in the league. And it ended up being the unlikeliest of heroes, Baker Mayfield, who saved the day for Coley and gave him the three-point victory to stave off sole possession of last place heading into the final week.
Hubbs and Chaps got great days from DeAndre Hopkins and Leonard Fournette, but lackluster performances from the rest of the roster had them fall just short and end up in the cellar after 12 games.
Team Portnoy (6-6) 92.50, Fran and Kate (5-7) 85.70 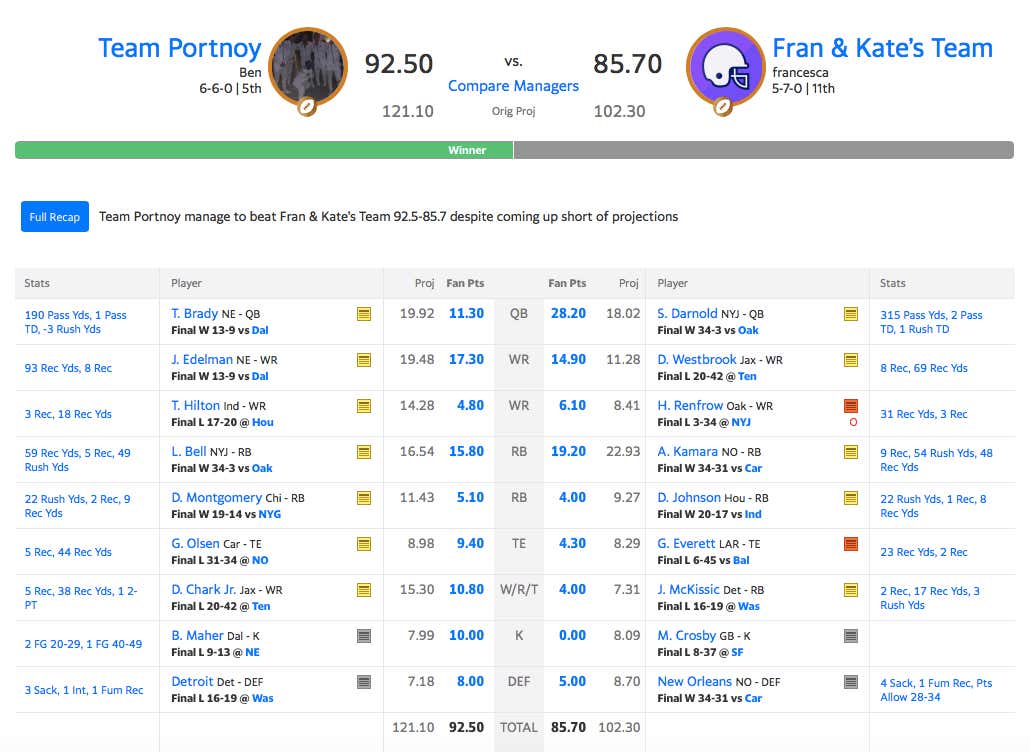 After quite a rough start that had Fran and Kate in danger of last place, the Frate Train had rallied a bit and had a chance to be squarely in the playoff mix with a win over Team Portnoy. However, with a solid overall performance from the boss's squad and a goose egg from Mason Crosby, it just wasn't in the cards. But the win puts Team Portnoy a game ahead of the six teams sitting at 5-7 and right in the thick of the playoff hunt.
Smitty (7-5) 156.62, Rone (6-6) 69.74 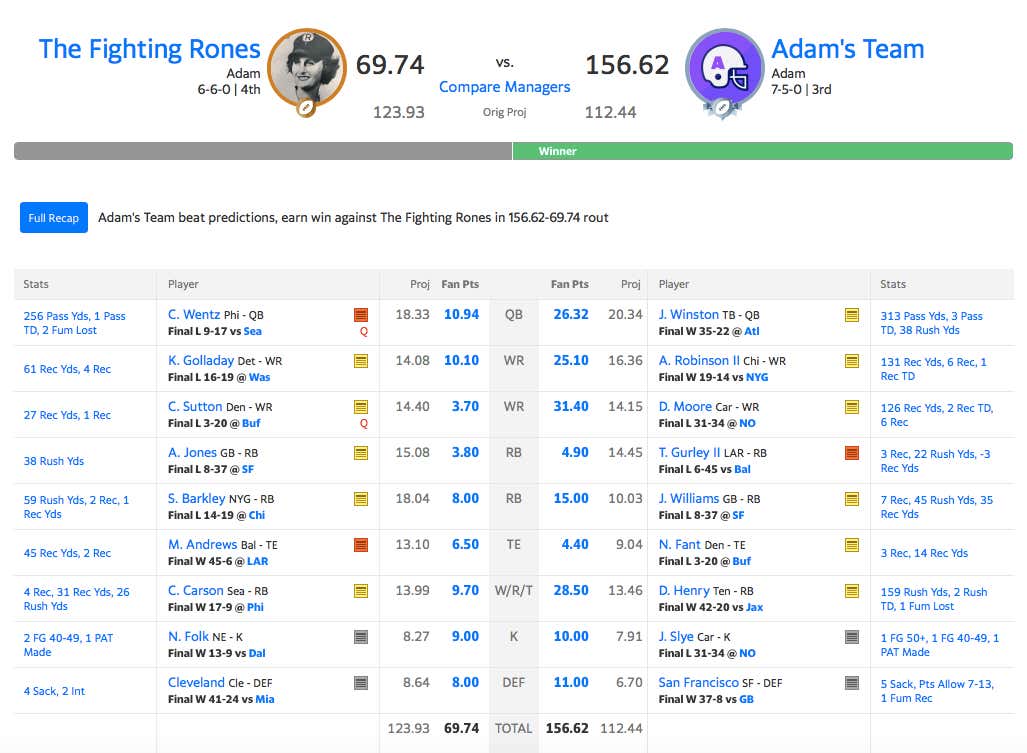 Just not much Rone could have done about this one. Obviously nobody wants to get beat by 87 points, but this one was all Smitty from the jump. Rone did beat the hell out of that guy in his rap battle, though, so not all was lost this weekend.
Team of the Week: LCB
Suckbag of the Week: Rone (only in fantasy, great job rap battling)
Standings: 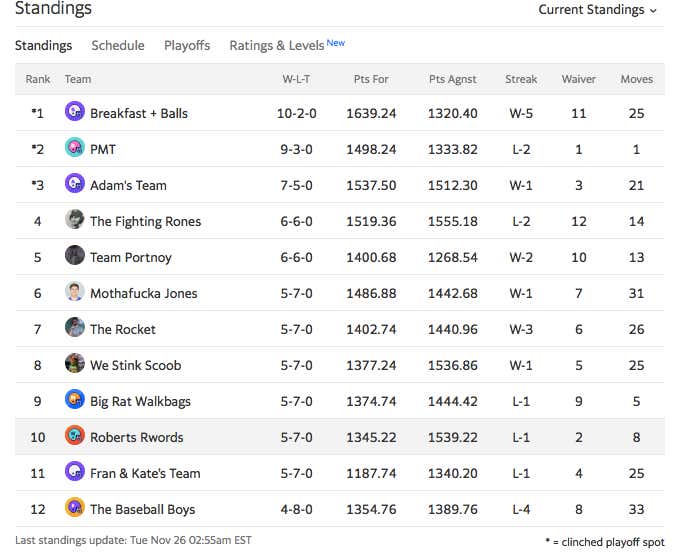