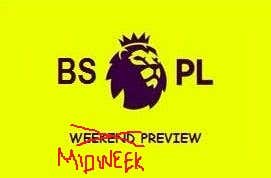 Results from this past weekend: 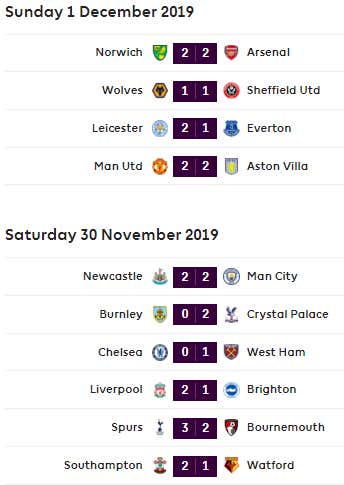 Note: people sure are butthurt about City being ahead of Liverpool. Dang! (Note: if City fail to beat Burnley this week I will officially admit defeat and acknowledge I’m dumb.) 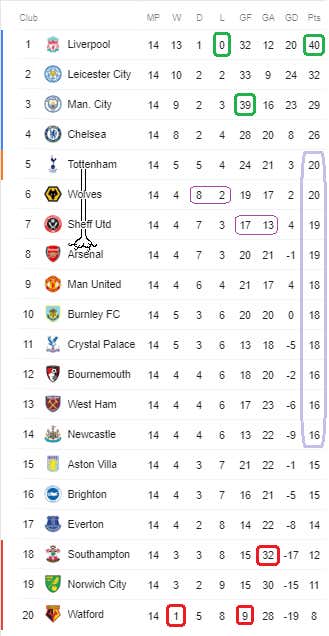 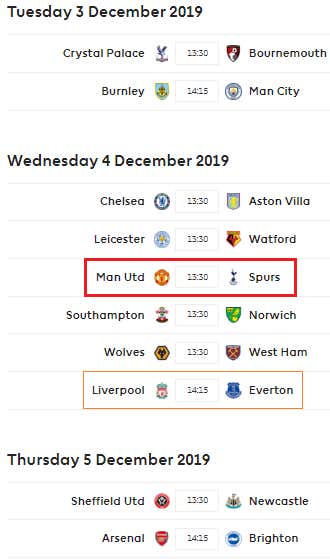 Dear Leader returning to the scene of his most recent crime (felonious failure to produce wins) while employed by the latest club to buy into his once-undeniable-but-recently-faded-genius is going to be must-see TV.

Strangely, while a lot of the talk will be about Jozay’s new club, this game is more about United. They stink. I don’t know how much Woodward has offered Pochettino but whatever it is he should just double it and get a deal done.

2-2 draw vs Villa – yikes… Villa are a competent side but still, just yikes

The players that United has available on an individual basis are not awful, the combination of James/Rashford/Martial up top especially, but let’s face it their midfield just plain stinks and the empty hole in the XI left by Paul Pogba’s continued “absence” seems to be both festering and oozing disappointment. No club, not even one with more money than god, can buy a player for that much AND pay him that much in wages while getting absolutely nothing in return without it causing problems. On the plus side they might get Scott McTominay back, which could be a nice little boost.

What to expect on Wednesday?

GOALS! Lots of them!! United have been shipping goals all over the place and Tottenham’s defense is worse than it has been in many years – and unlikely to get much better without personnel changes (i.e. buying better players). The CBs are aging rapidly and full backs just plain stink (at defending). Both teams can score and likely will against the rickety backlines… but I’m going with Spurs to win 3-2 because they still seem to be riding high on the initial wave of confidence that Jozay brings and, as mentioned previously, United stink right now. The only reason I’m not calling this my LOCK OF THE WEEK is because I am so confident Spurs will win that it is legitimately scaring me. [Also, if you aren’t betting the OVER then I will pray for you and your broke ass future family.] 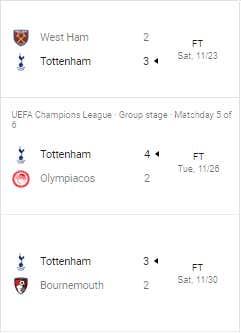 Where that bus at, cuh?

Unfortunately the air quotes around ‘dærby’ are necessary at the moment because this is a (friendly) rivalry in much the same way that Justin Timberlake and JC Chasez were competing to be breakout stars from NSYNC. One blew up and the other was a guest judge on America’s Best Dance Crew one time. 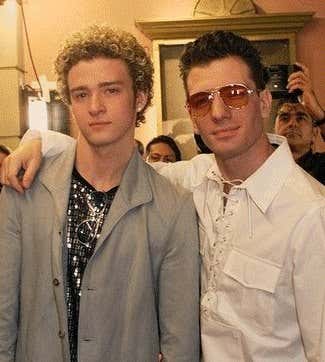 The only interesting thing about Everton at the moment is how in the hell Marco Silva is still employed. The club splurged on him – and more importantly let him splurge on a ton of players – and the ROI has been quite possibly the worst in world soccer (though United might give them a run for their money). The Toffees sit all alone in 17th place just two points above the relegation zone at the moment. They have waaaaaaaaaay too much talent to be this bad. They are even out-Spursing Spurs in terms of finding new and clever ways to break their fans’ hearts, as demonstrated by this weekend’s injury time game-losing goal conceded to Lester was initially ruled out and only given after a VAR check.

That said, Everton ALWAYS show up against Liverpool who – despite their million game winning streak in the league and four of the top 10 Balon d’Or vote-getters – quite simply have not been all that impressive lately. Some people got #madonline that I listed City ahead of Liverpool in the power rankings but I stand by it. I’d take Pep over Klopp on a neutral field at the moment. So do Everton have a snowball’s chance in hell? Yes, but not much more than that. If I were going to bet on this game – something I would not do even if I was using YOUR money – I’d probably take something silly like Everton(+1/2) in case they do that thing they do and come out of nowhere with an incredible result against Liverpool. But at Anfield? I mean, I just can’t pick against the Reds right now given how much Everton hates success at the moment. Liverpool to win 2-1. 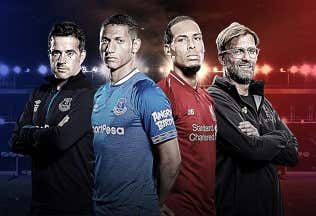 I mean, listen, I like Richarlison as much as the next guy but the matchups in this little promo is a perfect example of where the clubs are at right now

• Palace 1-1 Bournemouth – extremely even matchup and likely a really close game… gotta expect Palace’s defense will clamp things down at home. (Do I love the UNDER? Love is such a strong word. Let’s just say I have strong feelings for it.)

• Burnley 1-3 CITY – the Clarets are a tough team to pin down at the moment, getting spanked by Sheffield Utd, spanking West Ham and Watford, then getting spanked again this time by Palace. The common denominator in those losses is they were facing solid defenses. Not even sure City qualifies as that at the moment… but that is only because I am judging them on a scale against recent seasons where they have been lights out so I’ll say they are probably close enough.

• CHELSEA 2-2 Villa – The Blues have outperformed expectations by a wide margin this season but are suddenly winless in three… and while one of those was a solid road loss to City the most recent was an inexplicable home loss to West sHambolic United. Is this the reversion to the mean a lot of people have been expecting? They are not helped by the (likely) absence of Tammy Abraham up top, and Villa got themselves a nice little squad this season – Jack Grealish has been exceptional – so I’m going with a bit of an upset.

• LESTER 2-0 Watford – Those dang Sneaky Foxes are coming off a last second comeback win while Watford are fresh off an absolutely heartbreaking loss to fellow relegation dwellers Southampton… I keep thinking “this is the game the Hornets’ offense stops sucking” but it keeps not happening. They won’t even have the benefit of a ‘new manager bounce’ because they haven’t had time to find a replacement for Quique Sánchez Flores, who JUST got done replacing Javi Gracia. If they somehow walk into the King Power and win this game it’d be the upset of the season given all that is going on with both clubs at the moment.

• SOUTHAMPTON 3-2 Norwich – Who can concede the least??? Both teams are atrocious defensively and just competent enough going forward to put some crooked numbers up. I’ll go with the Saints by a whisker.

• WOLVES 2-1 West Ham – You know what you are gonna get with Wolves. Solid team from front to back that will take advantage of any mistakes, and supplement this with an insane strike from Jota or Moutinho once a month or so. They are a hard-working, well-to-do upper middle class club that will remain as such while they have this core and Nuno Rasputin at the helm. West Ham is like Gary Busey. Fun to watch from a distance. They have some incredible achievements on their record (Point Break! Lethal Weapon! 1965 European Cup Winners Cup!) but they are also clinically insane. You have absolutely no idea what to expect from them from game to game. One day they will get their cheeks clapped by Burnley, then next they will walk into Stamford Bridge and beat Chelsea. And for whatever reason the Hammies are better on the road. So anybody predicting what they are going to do with any confidence is a yokel… but coming off their biggest result of the season I’ll say they come back down to earth and get out-hustled in a “meat and potatoes” performance from Wolves.

• Sheffield Utd 1-2 Newcastle – Pure value bet on this one. Newcastle are coming off a confidence-boosting draw with City and I’ll be damned if DeAndre Yedlin’s new ‘do isn’t spectacular.

• Arsenal 2-1 Brighton – Member the last time Arsenal won a game? Me neither. Which is all the funnier/stranger because they were fresh off quietly putting together a long undefeated streak when all of a sudden the team flipped a switch, Granit Xhaka lost his mind, the front office told Auba to stop being friends with his friends, the defense lost its marbles and everything suddenly went to shit. The good news is that Christmas came early for Arsenal fans as the club finally ripped the Unai Emery-sized bandaid off and the club can at least start trying to heal the various maladies that ail it… now exactly a pleasant backdrop for The Ljungberg Era to begin… but then again things are rarely “in a great place” anytime a new manager comes in. So what will Freddie bring that Unai did not? Fluent English will be one difference, but aside from that we will just have to wait and see what his style really is since his track record is… shall we say… rather sparse. But for now I’m going with a Dead Cat/New Manager bounce.

So there we have it. Quick turnaround with a full slate coming up again this weekend. Stay safe, kids!