If you are in New Jersey and looking for a book to bet with this season, check out PointsBet.com. Special offers: Sign up with PointsBet with code BARSTOOL and get a $100 bonus when you deposit your first $10.

Defenses are going to dominate this one. Most will identify great defenses with Utah, who ranks 6th according to SP+, but Oregon's defense has been very good all season, ranking 17th.

A SparkNotes version of both defenses.

Tonight's game is going to be in a rainstorm too:

On the surface, Oklahoma's win over Baylor earlier in the season was miraculous.

Let's take a look at the advanced box score from that game: 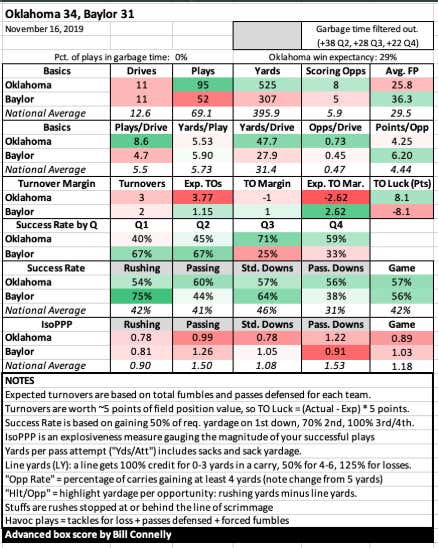 Oklahoma outgained Baylor by over 200 yards. They had 3 more scoring opportunities. Averaged 20 more yards per play. Their biggest advantage came in the 2nd half:

Will Oklahoma's success rate be over 60% for the entire game tomorrow? Probably not, but I believe the second half of that game a few weeks ago was the true preview of the Big 12 Championship game.

What prevented a blowout win for Oklahoma was the defenses terrible first half and Jalen Hurts turnovers inside Baylor's territory. I see the opposite of that happening tomorrow. Oklahoma's defense has allowed just 204 yards to TCU and 335 to Oklahoma State since the Baylor game. On top of that, they've only surrendered 40 points.

I see Oklahoma winning in a rout.

Sometimes I feel like the only Kirby Smart supporter in the world outside of Georgia. What he's done since taking over in Athens is phenomenal:

I really believe that Georgia is going to win this football game.

Let's start on the offensive end for Georgia. The Dawgs are going to have every opportunity to put up points on LSU. The Tigers defense isn't awful, but they struggle stopping explosive pass plays, a place they rank 127th in the country. Jake Fromm has showed out in every SEC Championship game he's been in and will do so tomorrow. He's also going to have a lot of time to throw the ball. LSU's sack rate ranks 83rd, while Georgia's dominant offensive line ranks 5th. This will give Georgia's WR's plenty of time to develop down the field routes against a lackluster LSU pass defense.

I think this all this adds up to a Georgia victory.

Ohio State and Wisconsin's first matchup ended in a 38-7 victory for the Buckeyes. 45 total points. Most of that game was played during a rainstorm, limiting both offenses. Wisconsin's offense failed on three occasions inside OSU territory during that rainstorm.

Fast forward to tomorrow and we'll have Ohio State and Wisconsin playing in a dome, which will benefit Ohio State's explosive offense, which ranks 4th in the country according to SP+.

Wisconsin's offense isn't anything to laugh at either. They rank 11th in the nation and put up 38 points last week during a snowstorm in Minnesota.

This one is going over.

Clemson in ACC Championship game the past two years:

Clemson is mad right now. They don't feel they are getting the respect from the media. Just listen to any Dabo Swinney press conference the past 2 weeks:

Clemson has been on a warpath since their almost loss to UNC:

Clemson is the best team in the nation not named Ohio State.

The first matchup between these two teams ended with a 10-point victory for App State. The Ragin Cajuns were stopped on 4th-and-goal, were the victims of a few weird calls, and allowed a 10-minute TD drive late in the 4th.

Since their loss to App State, ULL has cover 4/6 games. Their coach Billy Napier is 18-7 ATS since taking over in Lafayette.

According to FEI, ULL (23rd) is the better team than App State (25th). Their offense (16th) led by QB Levi Lewis will be able to put up points.

I think this line should be 2.5 or 3 points towards App State. 6.5 is too much. Give the Ragin Cajuns!

Last week Memphis closed as 14-point favorites. This week, they are only 9. The only reason I'd see that much of a change is due to Cinci's QB returning from injury. However, I'm not too sure that Desmond Ridder is that much better than Ben Bryant who accounted for 230 yards passing and 2 TDs last week against Memphis. Ridder is also dealing with a shoulder injury, something that could effect his already average level play.

Memphis is the much better team here. They rank 13th in SP+, while Cincinnati ranks 39th. They have home-field advantage and frankly took it to Cinci last week. SP+ has this as a 15-point advantage for the Tigers.

Cincinnati has been lucky all season. They've been outgained on four occasions in games they ended up winning. They have 4 wins within 3-points.

Memphis puts an end to Cincinnati's lucky season tomorrow in a beatdown.