Good morning, and scream it from the rooftops while standing behind your busty friend with a pencil behind your ear... "IT'S FIGHT DAY!!!" 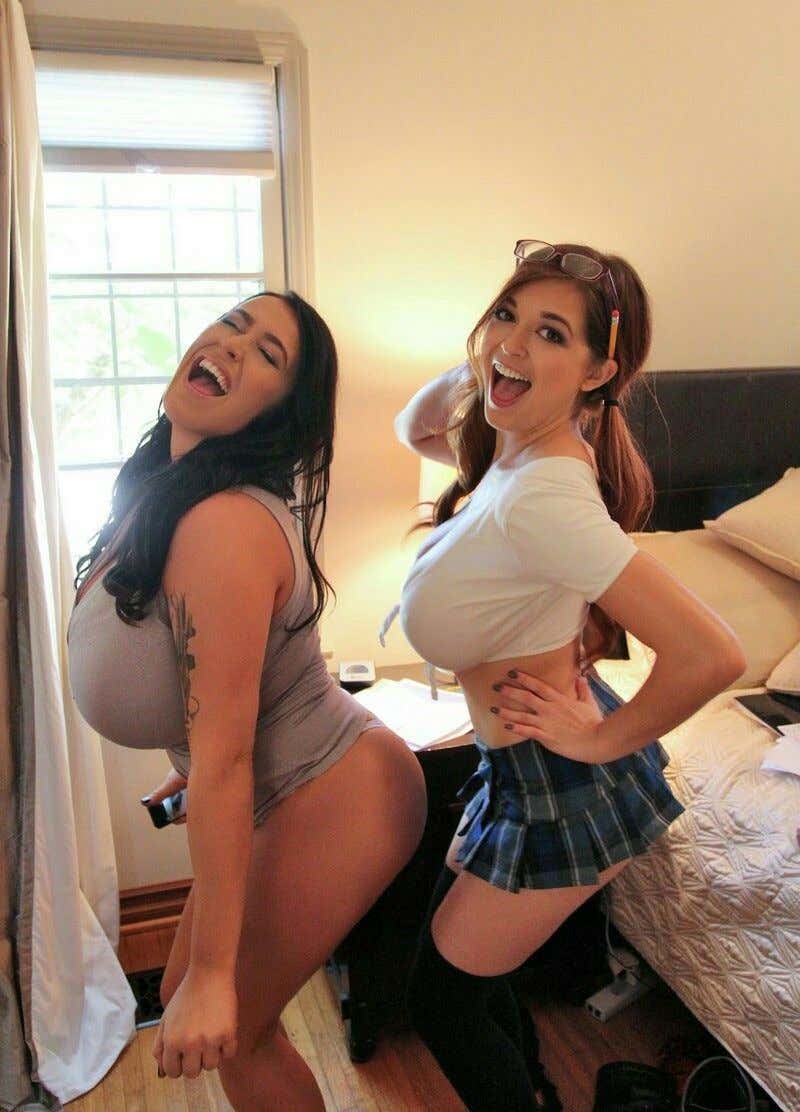 After shocking the world just over 6 months ago, an even MORE overweight Andy Ruiz Jr is fulfilling the rematch clause within the contract of his last fight.  A fight where he upset a heavily favored and very muscular, Anthony Joshua.  That victory gave Ruiz 4 shiny new belts (WBA Super, IBF, WBO, and IBO), which he now has to shove back into the middle of the table for this match.

Joshua was an 11-1 favorite in their first fight and was looking like a 2-1 favorite for the rematch last time I checked.

The fight is taking place at the Diriyah Arena, a newly constructed 15,000 seat open-air venue which is located just outside of scenic Diriyah, Saudi Arabia.

I will not be in attendance in Diriyah, mainly because some of the pictures I post are confusingly inappropriate and possibly grounds for execution in some Saudi households... Oh well. 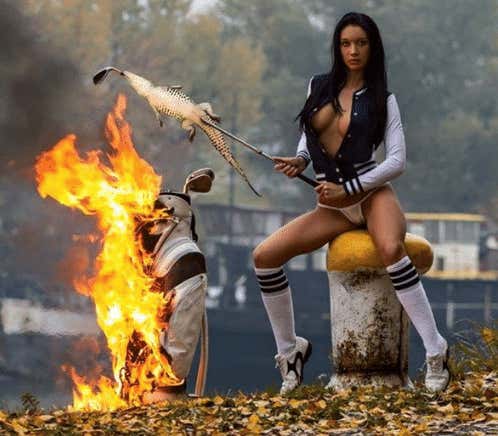 With the time change, the main card starts at noon Eastern Time, with the Main Event set to start sometime after 3:45 PM ET, and it will be live-streamed only on DAZN.

Here's the Tale Of The Tape... Or at least the highlights, as I see it.

- Joshua's record is 22-1 with a whopping 21 KOs... He only went the distance once, and that was with a unanimous decision over a very serviceable fighter from New Zealand named Joseph Parker in March of 2018.

- Andy Ruiz's record is 33-1 with 22 KOs... Andy's only loss came at the hands of that same New Zealander, Joseph Parker, when Parker took a majority decision over Ruiz in December of 2016.

--- Interesting Fact To Maybe No One But Me- That Parker vs Ruiz fight was for the vacant WBO belt that was stripped from none other than The Gypsy King himself, Tyson Fury, due to his inactivity after his victory over Klitschko AND after Fury tested positive for cocaine. --- 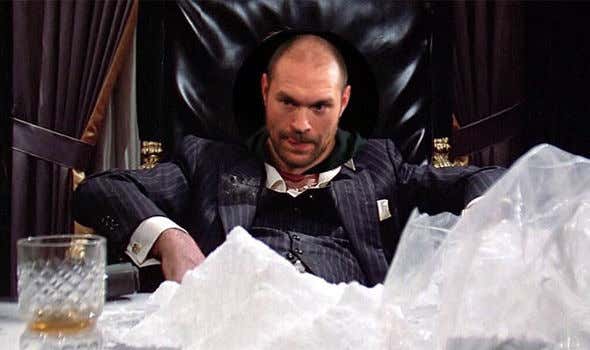 - Both fighters fight Orthodox (meaning they don't eat pork on Saturdays AND both are right-handed). 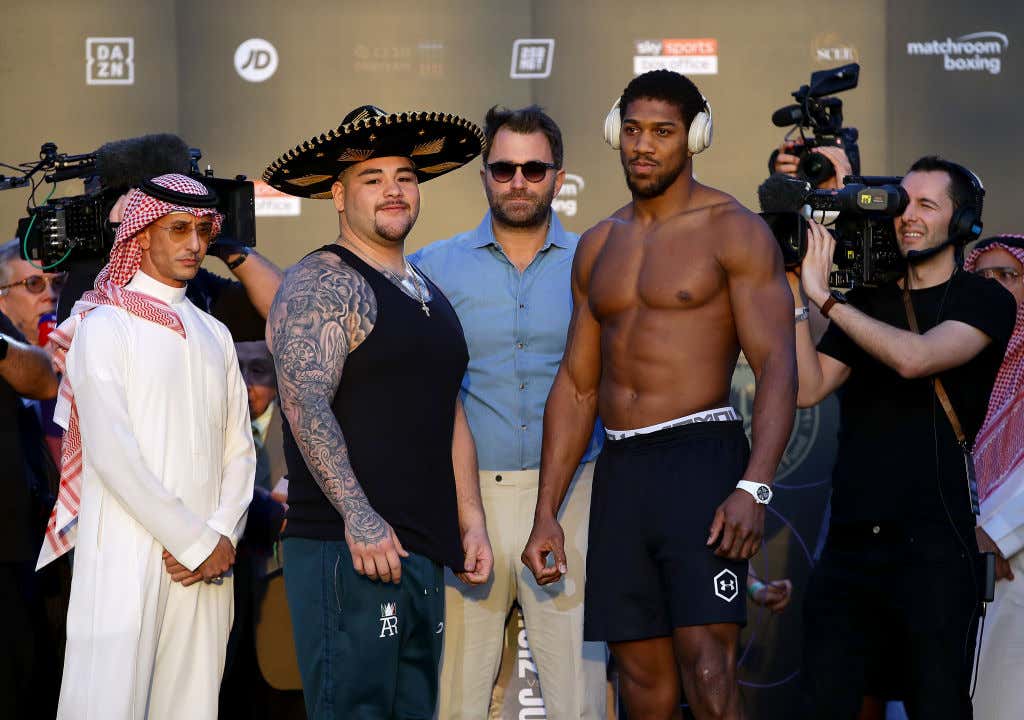 In their first fight, Joshua weighed in at 247.  He weighed in today 10 pounds lighter but sculpted like a Greek god who is also black.

Those weights will obviously fluctuate before the fighters step into the ring, but for now (and I just did the math), Andy Ruiz will be around 5 inches shorter than his opponent (give or take an inch) BUT will be 45 pounds heavier. 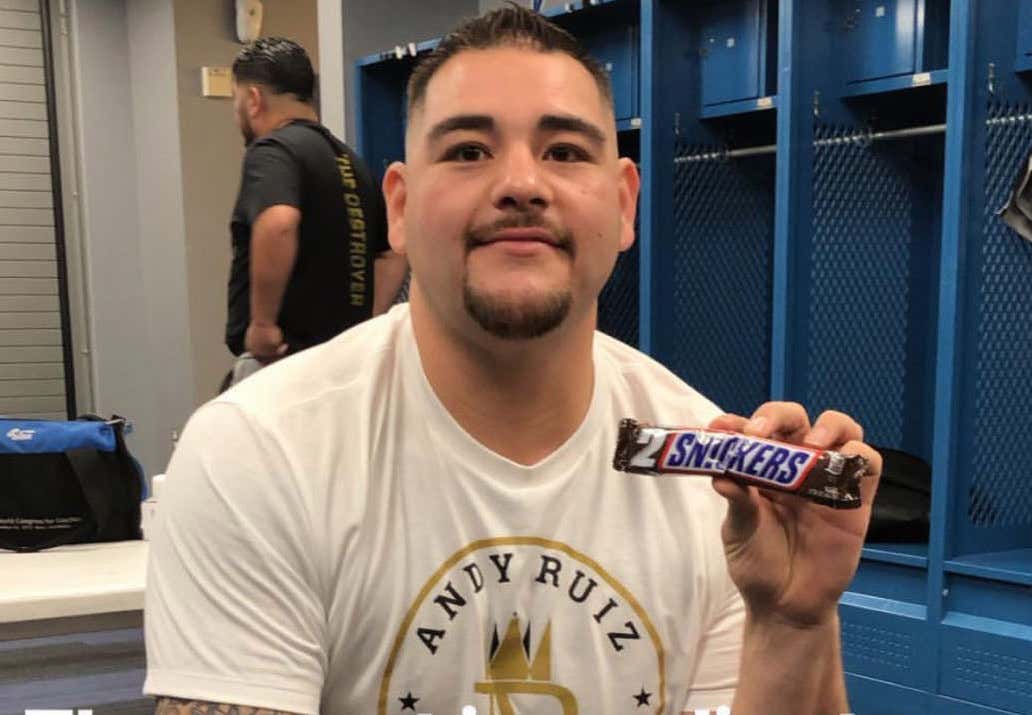 --- Another Interesting Fact To Maybe No One But Me - No heavyweight has ever entered a title defense heavier than what Andy Ruiz is right now EXCEPT for Nikolai Valuev, who was over 300 pounds for each of the defenses he made over two title reigns between 2005 and 2008. ---

Do you know what the difference between Andy Ruiz and Nikolai Valuev is? 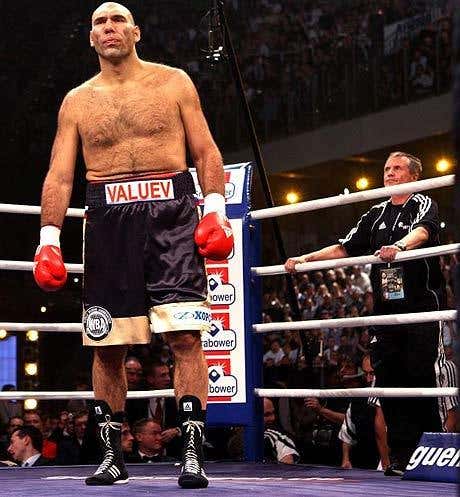 Nikolai is 7 feet fucking tall, the tallest world champion in boxing history... His nickname was non-ironically "The Russian Giant", and was a full foot taller and a full 100 pounds heavier when he won a majority decision against a washed-up 46-year-old, Evander Hollyfield in 2008. 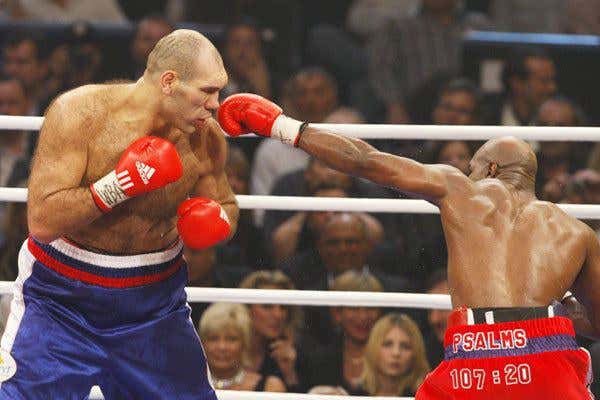 (more on Holyfield in a minute)

Aside from the playful fat jokes, I don't disrespect Andy Ruiz's talent at all.  The guy has been fighting for a long time (he claims since he was 6 years old), and against a decent level of competition.  However, I think Joshua's biggest mistake in Part 1 was that he gravely underestimated Ruiz's ability, particularly, his quick hands...

Plus, the weight concerns me with Andy... It is eerily similar to how Buster Douglass ballooned-up after he upset Tyson.

For those who forgot, Buster never signed up for a rematch after he slapped the taste (and mouthpiece) out of Tyson's mouth.

The money was certainly good, but Douglas' camp turned down the rematch because they didn't want to deal with that notorious scumbag, Don King. 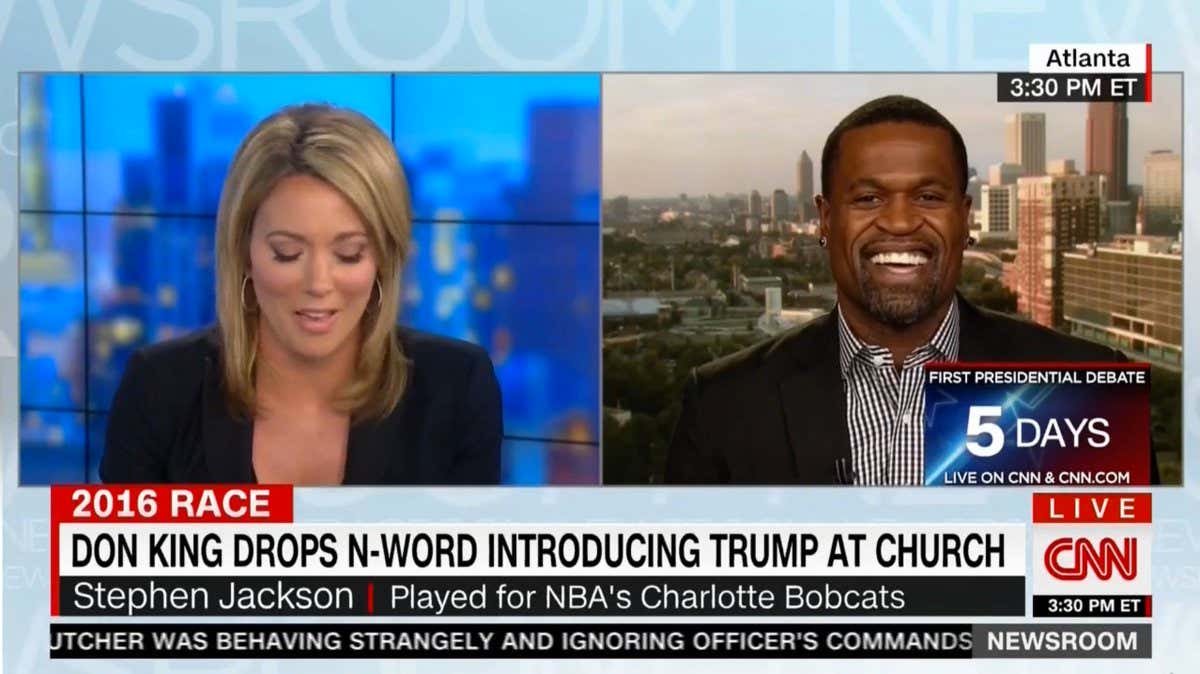 Instead, Douglas decided to make his first defense against #1 contender Evander Holyfield, and Buster went into that fight at 246 pounds, 15 pounds heavier (like Ruiz) than he was for the Tyson match and (like Ruiz again) also the heaviest he had weighed-in for a fight in nearly a decade.

A much lighter and absolutely chiseled (like Joshua) Evander Holyfield dodged a lazy uppercut from Buster and then laid Douglas out with a straight right to the chin in the third round of that fight.

Legendary referee, Mills Lane, then counted Douglas out, and Buster eventually had to be carried back to his corner long after the count of 10.

Buster Douglas retired after that loss, ballooned up EVEN MORE to 400 + pounds, and eventually went into a diabetic coma.  Six years later, when he eventually recovered and dropped weight, Douglas returned to boxing... But never made a dent.

(I know that's a picture of Proposition Joe from The Wire, but the similarities between him and a fat Buster Douglas are uncanny... Look it up.  It should be a breeze.)

But back to today's fight: I know these extra pounds will put more power behind Andy's shots (and he certainly throws a lot of them), but I think Joshua will do a better job this time of creating distance.

And we know Joshua has the power to knock Ruiz down (Ruiz had never been dropped before Joshua knocked him down in Round 3 of their first encounter).

It's tough to beat the same team twice, and the same can be said about fighters who are favored over you both times.

For Barstool Bets- I am going with the bookies on this, and like Joshua in 6.  Ruiz is going to come out swinging for the fences, but if Anthony creates the distance, he can find some openings for straight hands between the barrages.

And if you're looking for an underdog to maybe ride on the undercard, I would throw a couple of bucks on Alexander Povetkin (+170) versus Michael "The Bounty" Hunter (-200). Povetkin, the 40-year-old Russian (and 2004 Olympic gold medalist) rebounded from his knockout loss versus Anthony Joshua last year by scoring a decision win over Tyson Fury's cousin, Hughie Fury, in August, and Povetkin has always been tough as nails.  His opponent (and the favorite), Michael Hunter, is 31 years old and has an 18-1 record... Hunter has won six straight (against nobodies) with his lone loss coming at the hands of a very dangerous Alexander Usyk in 2017.

Outside of that, the 2 overwhelming favorites on the card, Dillian Whyte and Filip Hrgovic (both heavyweights), should both take care of business against Mariusz Wach and Eric Molina, respectively.

And here' the big ending... 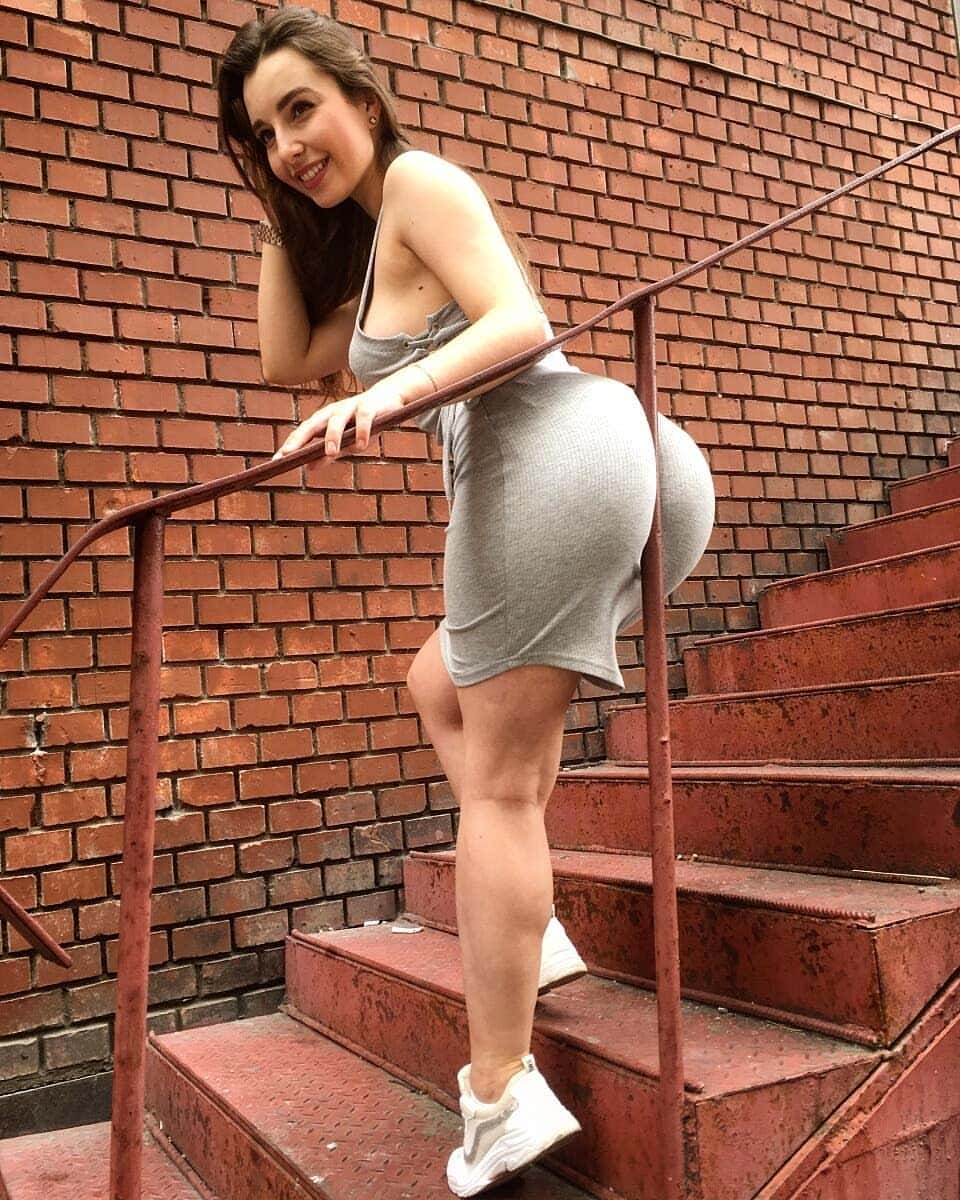 Tune into the Dillian Whyte fight because his aforementioned opponent Mariusz Wach is known as "The Viking" and he is one scary looking 6'8" Viking sonofabitch.  He's not a very good fighter, but the size difference between him and Dillian should make for a good David-and-Goliath scenario when they touch gloves in the center of the ring after intros. 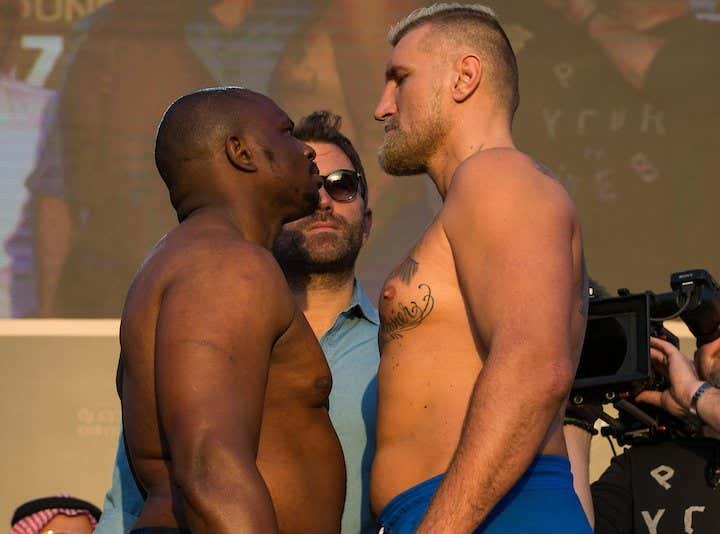 AND, if you're into terrible tattoos, Mariusz has a pretty fucking creepy one of his kid's face inked above his left nipple... 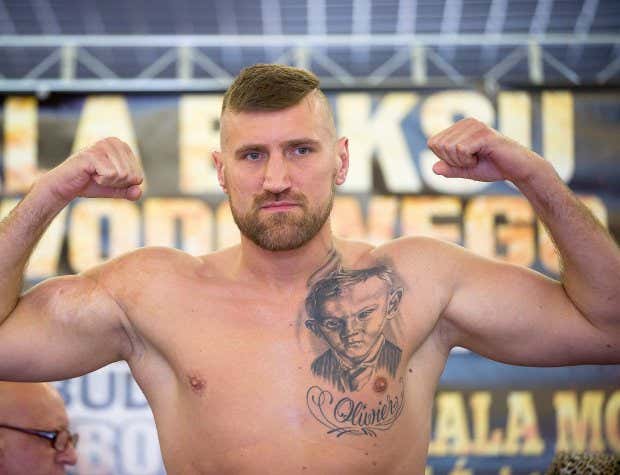 Enjoy the fights, you sick fucks, and take a report.