Last half of the last matchday with last two of 16 spots in the Champions League knockouts still up for grabs. Only proceed if you love soccer and/or hate money…

Results from yesterday and schedule for today: 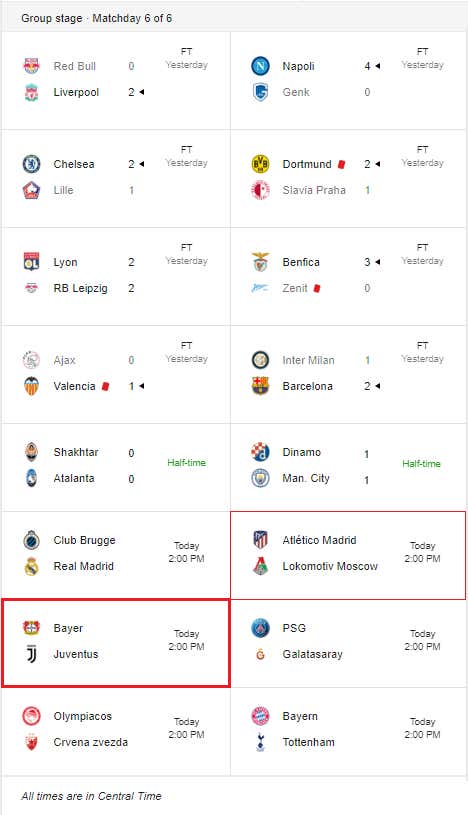 One of the few meaningful games as far as moving on goes and yet, in what could be a cruel twist of ironic fate for Atletico Madrid, a game that means absolutely nothing to Juventus – hence the long odds on the Italian champs who recently spanked these same Ibuprofens 3-0 in their initial meeting in October.

In an even crueler twist of non-ironic fate (for Bayer), however, Maurizio Sarri has actually chosen a pretty damn strong XI for this game. Might it have something to do with the fact that Diego Simeone probably would have tracked Sarri down and cut him like a fish if he had sat guys like Ronny, Higuain, Pjanic, Matuidi, etc? I guess we will never know. As it is though, and even though they are on the road and have nothing to play for, it is hard not to love the value you are getting with the Old Lady. I’m going with a (Barcelona-from-yesterday-like) upset: Juve to win 2-1.

Ze Russkis just got their cheeks CLAPPED by something called Arsenal Tula, which I assume is the Russian off-brand equivalent of regular Arsenal, which is bad enough these days. Atletico to win 3-0. 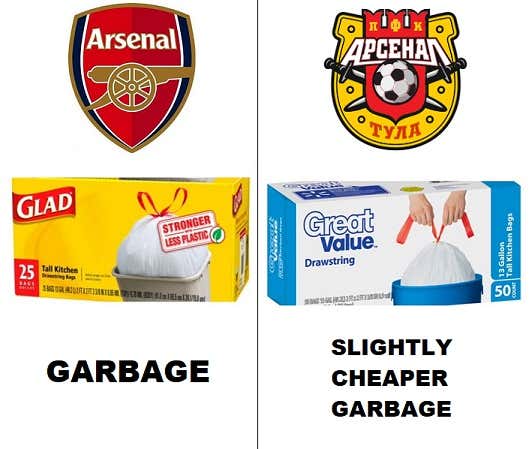 • BAYERN 2-0 Tottenham – High profile game that means diddly squat now that the two teams have secured their positions as group and possible banner winners, respectively, with no possibility of moving up or down today. Jozay forbade Spurs from watching game film from the 7-2 drubbing they took at the hands of Ze Germans in October. Probably for the best. More importantly though Dear Leader has left half his first-choice starters back in England for this game, choosing instead to all but concede defeat. Absolutely brilliant strategy if we are being honest. Spurs weren’t going to win anyway but now have a perfectly good excuse since it’ll be a bunch of B-teamers out there. Maybe the Special One hasn’t lost his fastball after all?

• Olympiacos 1-2 RED STAR– the Greeks are HEAVY favorites in this one but those dang Serbs can be pesky . [Note: originally had Red Star at home… whoops… my punishment is having to stick with them as my pick and lose all my moneys. Very sad!]

• Brugge 1-1 Real Madrid – Madridistas have nothing on the line whereas the wee Belgian buggers are desperately trying to stay in third ahead of Galatasaray. Desperation does weird things.

• PSG 2-2 Galatasaray – Not a great season so far for the Turks, who are in 6th place domestically at the moment, and things could go from bad to very much worse if they fail to jump Brugge and miss the parachute drop into Europa. PSG have been quite good defensively (granted, against mostly farmers) but their lack of incentive to try hard combined with Galatasaray’s desperation means I LOVE both teams to score, especially since the Parisians are starting a front line with Neymar, Icardi and Mbappe.

Reminder: More great soccer coming up tomorrow. Kidding, it’s just Europa. As you were. Back with another weekend edition on Friday.