This is pretty cool. Two days ago a young man named Matt Seltzer won a massive Foxwoods tournament for close to $96,000. He bobbed and weaved his way through 1,215 other players on his way to first place and a huge score, especially for a $600 buy-in. Quite an accomplishment by any measures. But what makes this even cooler is the message he sent me after his win. My man just won close to $100,000 and then got on Twitter and sent this DM: 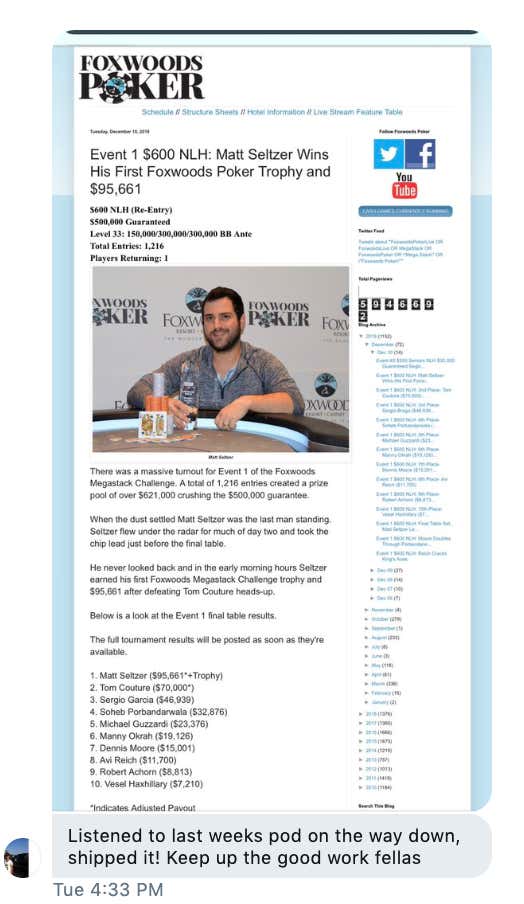 Obviously we aren’t taking the credit for this (ok, 5-10%), but how awesome is it that he listened to the episode about how to improve your live poker tournament game on the drive and then shipped it? I like to believe something Jake said during the episode entered his brain at the exact right time and propelled him to victory.

The episode is very cool- we got a bunch of questions from listeners and Jake who is a professional poker player answered them both in depth but in simple enough terms that even amateurs like myself could understand. The number 1 question we get is “how do I get better at poker” and last week’s episode is definitely a good starting point for that, and it appears that if you listen to it, you’ll win a tournament for close to $100k too.

This week’s episode we talk about Michigan legalizing online poker and talk to an expert in the legalization process about why it can’t get done nation-wide. He had a ton of insight and knowledge on the subject, and it’s equal parts fascinating and fucking frustrating. From the sounds of it, some states like California are SO FAR away from legalizing online poker and it’s infuriating to hear why. We also have some strategy talk (how to play QQ on an Ace high flop), I recap my trip to beautiful Kansas City, and we give advice for newbies going to the WSOP for the first time.

I appreciate everyone who has tuned in- we are steadily growing and recording the show and putting it out there is my favorite thing I do. If you are an amateur who likes playing home games with your friends, you’ll dig this podcast. There’s some strategy, some advice, some stories, interviews with the biggest names, and much more. If that interests you, give it a listen, I think you’ll like it.