This came onto my timeline earlier and figured I'd pass it along to any Chiefs fans or degenerates out there looking for a sign from God or at least God's right-hand Man for how this week's AFC Championship Game will play out. Do I have to capitalize Man when talking about the Pope? You know what? Better safe than sorry, with sorry being getting thrown in hell for poor grammar. Nothing but CAPS from here on out for #MyPope.

Anyway, there is a whole lot to like about this picture if you are a Chiefs fan or backer. For one, the Pope is on kind of a heater when it comes to blessings this season. First, he tweeted out a #Saints hashtag mere hours before their games with the Jags. I don't know if He did this intentionally because everyone in The Church is a Saints fan, because He knows Chaps went from being a preacher to living a life of sin, or he had no clue the fleur-de-lis of Who Dat Nation would appear (shout out to The Pope for using TweetDeck like your pal Clem does).

The result of the Saints game later that day on the road with a backup quarterback against what was a good defense at one point this season? A win, a cover, and probably some sad tissues in the Chaps house.

Then a couple of months later, the Ravens looked get some of that good juju from the good word's mouthpiece by giving Him an autographed Lamar Jackson jersey with a bonus John Harbaugh signature to lock up those vibes.

The result of that week's Ravens game? Another hard fought win on the road along with a cover for the people at home/The Vatican, and some happy tissues in the Banks house.

Which takes us to this week.

I know that the non-believers will point out that the Saints and Ravens are both watching the playoffs from football heaven. But the analytics also say that teams are 2-0 after being blessed by God's (Football) Guy. The Chiefs giving the signed jersey of their already unfair glitch of a quarterback with a laser rocket arm is bad enough for the Titans. But look at Big Frankie's reaction to getting that jersey. 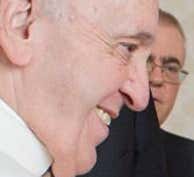 My Guy is grinning ear-to-ear like The Lamb Of God just escaped from his cave on Easter morning. Kid on Christmas morning vibes. Pure motherloving bliss. And not only that, but we the international sign of approval with El Papa. 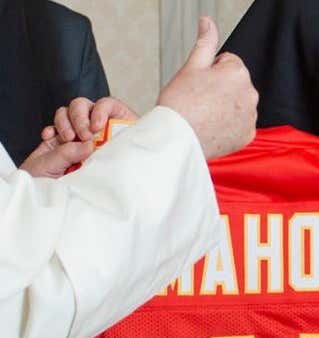 Is a thumb's up from God not only able to overcome Playoff Andy Reid going full Playoff Andy Reid defeat a team with Golitah at running back but also ensure a win of 7+ points? That's not for me to decide. But it sure as shit doesn't hurt and I bet Mike Vrabel's dick isn't all that upset right now.

Okay, I probably shouldn't write about Mike Vrabel's dick in a blog about the Pope. Anyway, as someone that is 1-0 betting the Chiefs based on signs from God these playoffs, I know who I will be betting on come Sunday.