First off… changing the name of this series from Wager 2020 to Bet 2020 because… Barstool BETS. Didn’t realize that one until after I pressed publish last time. Anyway, it’s Bet 2020 now, but the game is still the same: go to http://PredictIt.org/promo/Barstool20 to get your first $20 matched in the stock market of politics, and then you can place wagers on which candidate will win each primary election/caucus leading up to the general presidential election… and then you can bet on that too.

Next, I tried to explain in the first blog how to conceptualize betting in a PredictIt market versus betting “future” with a sports book, and here’s the best way to look at it: 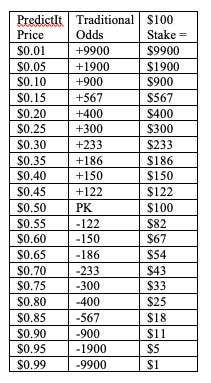 Every share you buy is worth anywhere from 1¢ to 99¢, that’s the same thing as a traditional “odd”. So when you buy shares in a market at 60¢, for example, you’re placing a “Future” bet that the market outcome you’re betting on will hit at approximately -150 odds… Something that Trump re-election is trading at even better than right now (50¢/even odds). The lower the price/odd of the share, the higher potential return on the win, just like any future ticket you’d buy in any other book. Difference is, if you get cold feet before the bet is over, or just need your money back, you can sell your stock back for whatever you can get for it when you want to get out.

Shout-out Hard Factor Cam for making that odds chart. He helps with all the Hard Factor News and BNN social accounts and is way smarter than me.

The First 4 States
Last time, we went over Iowa and New Hampshire. At the time, Iowa was basically a toss-up in the polls (with Bernie overvalued in PredictIt), and taking Bernie in New Hampshire as long as he was in the 50-60¢ neighborhood was the only real tip (I’m holding 51¢).

Well, here’s how those two states look now… Bernie is even MORE overvalued in Iowa than ever before on PredictIt: 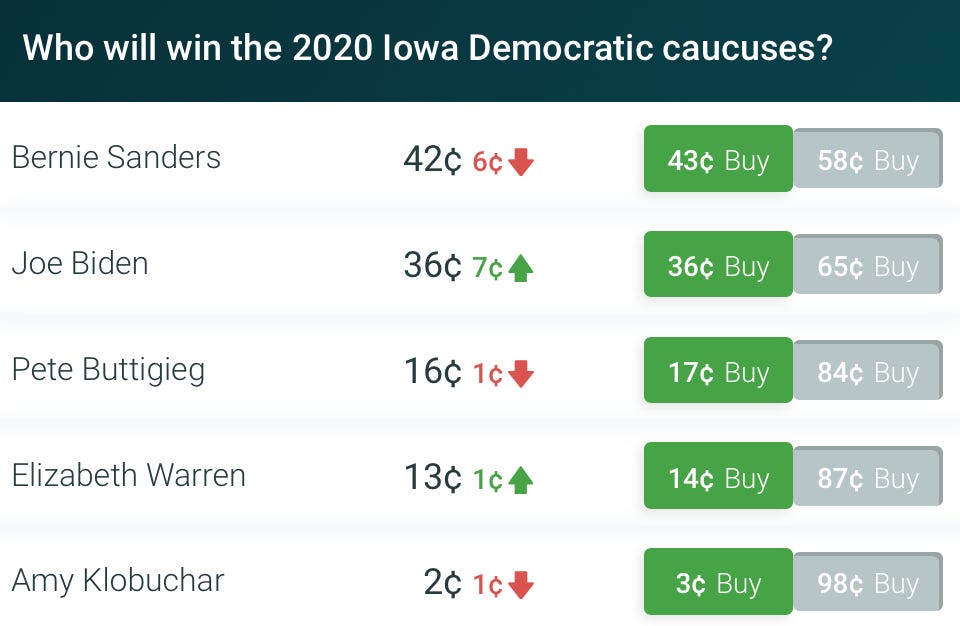 That is absolute nonsense, when you consider that the latest poll from today in Iowa has Biden up on Warren, Buttigieg, and Bernie by 6+ points! Needless to say, this market is a mess, and that's why I'm still staying out. Iowa looks very unpredictable to me, and I still don't know what the fuck a Caucus is, so I'm out… BUT if you think you know what's gonna happen there, everyone is at positive odds, so have fun.

New Hampshire is still looking good for our tip from the last time around: feelin' the Bern. Bernie won 60% of the NH vote last time, he's from neighboring VT, I like him anywhere up to 50-60¢, and he's still at 57¢. 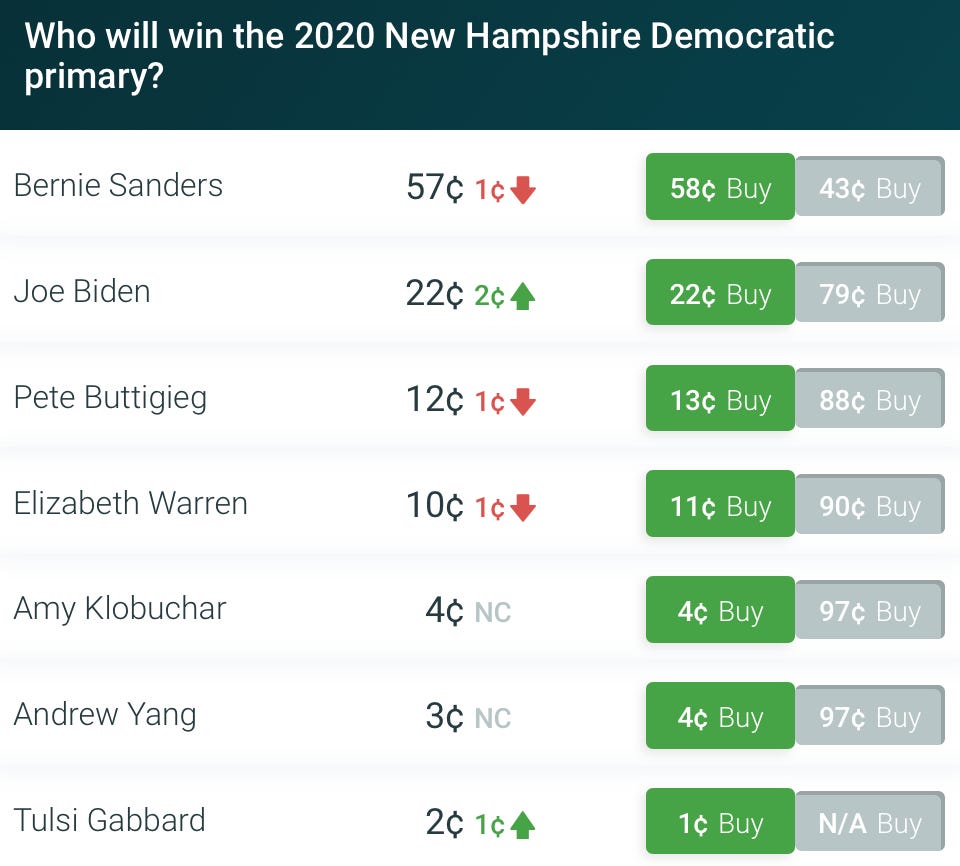 The latest polls support that Bernie should have the edge in New Hampshire, leading the field by 5% last Friday.

Next up, my current state of residence, Nevada. They’re going to be caucusing (just like Iowa), on February 22, and Joe Biden has been the steady favorite to win in NV since long long long ago. But low and behold, Bernie is now trading as the favorite… so what the fuck happened here? 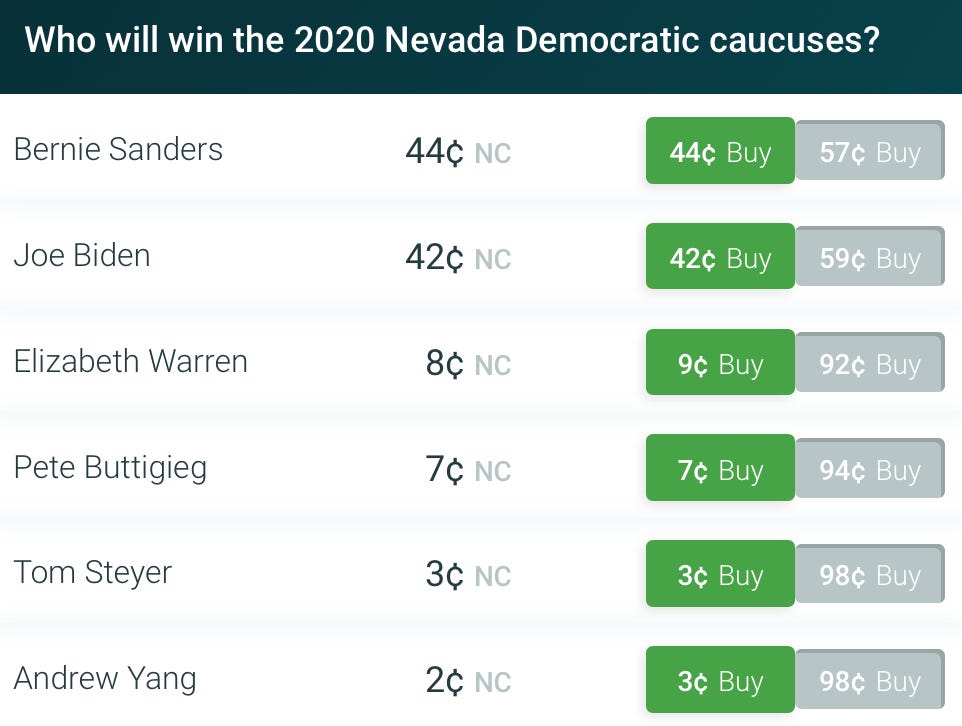 Somehow, since the last time I checked, all of a sudden Bernie and Biden are essentially tied in the polls from last Tuesday in Nevada. Looking like this one may be a coin-flip, which is about what it's trading at. Given that Biden has been the favorite all along, I'd take him in that coin-flip right now. But that could change if Bernie picks up steam in Iowa and New Hampshire. In general, I feel like Biden is under-valued right now, but that's probably just because most PredictIt traders watch the debates where Biden has been showing his age consistently.

Finally, let’s take a look at another presumed Joe Biden LOCK, South Carolina. Aviator Joe has been dominant in SC polls historically, and is trading at 80¢. If you're a fan of betting on Floyd Mayweather, this could be a good one for you, Biden was up on the field by 21% last time a poll was taken there. 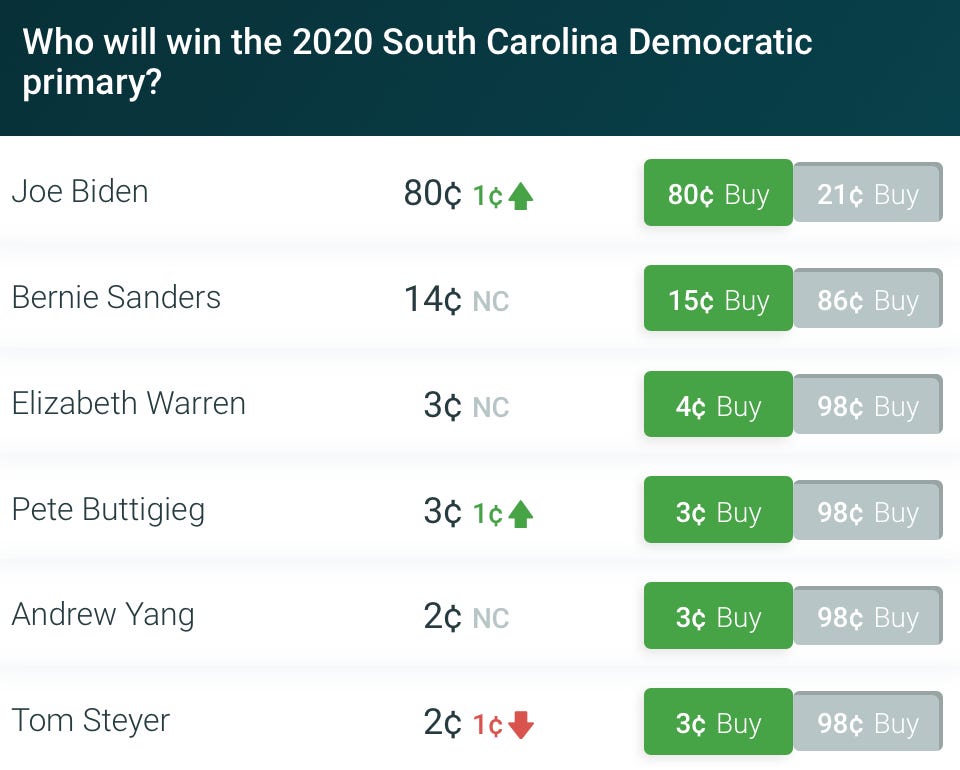 Welcome to the fuckin’ show. Whoever finally asserts their dominance and picks up the Democratic nomination (we’ll know for sure by the end of the DNC on July 16), will get to square off against the Head Honcho, Donald Trump and his #1 Pocket-Holder Mike Pence.

Trump is widely favored to repeat, considering there have been very few 1-term presidents in recent American history, and the impeachment attempt is looking like it may be a “swing and a miss”… but Bernie and Joe are making some noise as they appear to be heading into a showdown in the primaries. 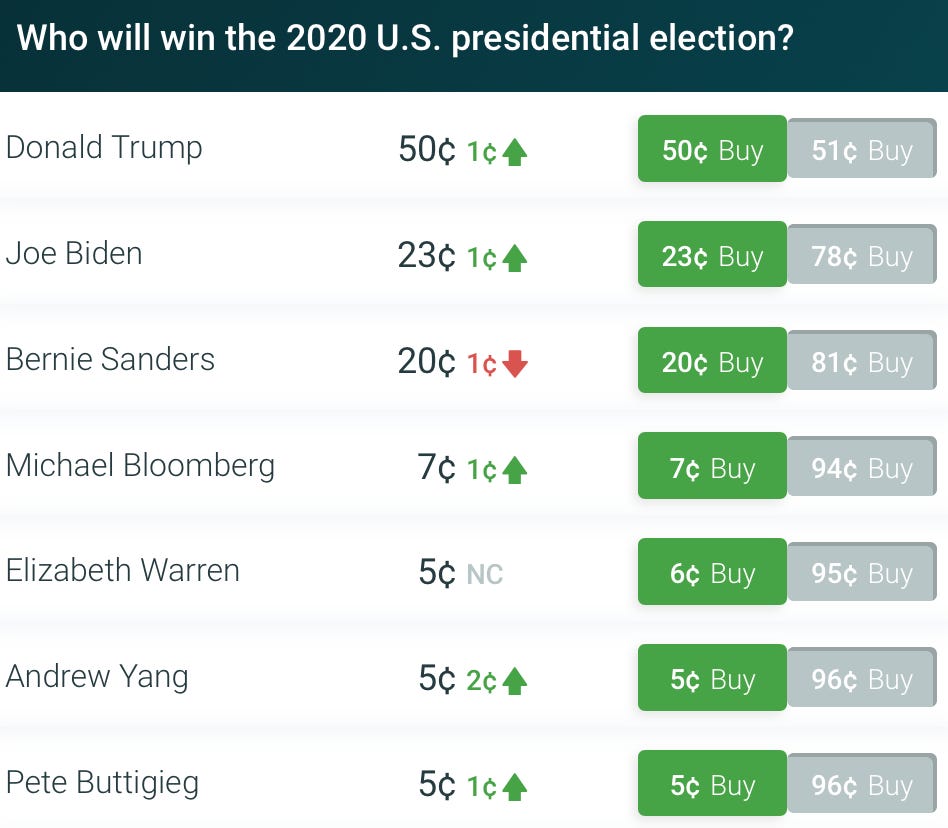 Right now, I’m up in both markets, but obviously that can crumble in an instant if Bernie starts tanking in the primaries or Trump somehow loses his office or momentum. I’d given both of these picks on the Hard Factor News Podcast, so if you didn’t hear them on-time, I’m sorry, but that’s on you for not subscribing to the best daily news podcast on the planet, so go do that… For now, I’m staying put, on these markets, but the 20% presumed lock of a gain on Biden in SC is pretty tempting…

Whatever you think will happen, get in on the action at http://PredictIt.org/promo/Barstool20 - they will match your first $20 in the stock market of politics. Legal in all 50 states, easy to deposit and withdraw. If you're gonna follow the news, you might as well make it interesting.