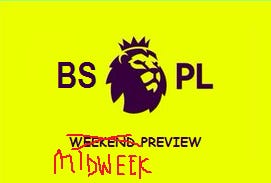 SURPRISE SOCCER! Let’s do it…

Results from the weekend: 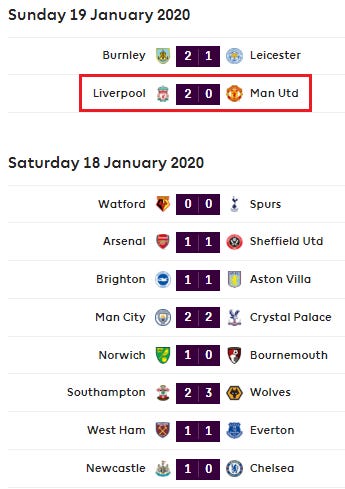 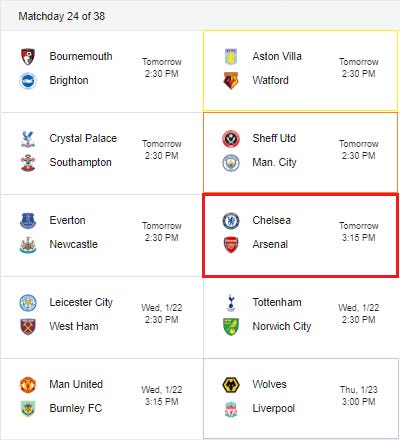 There was a time not that long ago where a London Dærby like this would have been one of the biggest games of the season. At the moment, though, Chelsea versus Arsenal just barely nipped ahead of Wolves vs Liverpool and/or Sheffield Utd vs City as the game of the week. And this isn’t merely a shot at those two clubs. It goes for the rest of the London teams as well this season. Take this weekend’s results for example (see above).

But back to the game at hand. Mikel Arteta apparently admitted that Arsenal must win to have any shot at top four. That is probably a gross bastardization of what he really said but the fact is those words are actually rather accurate. The Gunners are 10 points behind 4th place Chelsea already, and a loss this week might just be the coup de grâce for their slim hopes of qualifying for next season’s Champions League through the front door.

Thus, Arsenal arguably have a little stronger motivation, Chelsea low key stink at home, and The Babyjesus is out injured for a while (as is Reece James who has been big in defense). So Arsenal have that going for them, which is nice. Unfortunately they will again be missing PE Aubameyang up top, who has generated what little offense they have managed to produce under Arteta’s new defensively stronger, offensively challenged set-up.

Could this be the game Arsenal finally put in a total performance on both ends of the field under their new gaffer? I mean, maybe, but not sure what evidence that would be based upon other than hoping and praying. Some sort of ugly, low-scoring draw seems a lot more likely but I’m going with a late own goal from one-man Chelsea sleeper cell David Luiz to decide the game.

Liverpool may not lose a game all damn season………… but if they are going to lose one (at the very least between now and mid-March) this is going to be it. Wolves gave them a helluva game a few weeks ago at Anfield and the Molineux is not a fun place to play. If Wolves play like they did in the first half against Southampton this weekend they could lose by double digits. If they play like they did in the second half we might just have a real ballgame on our hands. The return of Diego Jota adds an extra little boost. Every little bit helps against this Big Red Machine.

If you want to buy a lottery ticket this week, this is your game. The bookies are going to continue to disrespect the Blades from now until forever, and City officially give zero fuqs about trying to keep up with Liverpool in the league this season and is focused exclusively on winning the Champions League. The recent 2-2 draw with Palace proved that. Sheffield Utd’s no-name offense probably doesn’t have enough firepower to really take advantage of City’s porous defense otherwise I’d grow some balls and go full-on upset. Instead I’ll go with…

LOCK of the Week

HUGE game between two clubs that – unlike Norwich and increasingly Bournemouth – have legitimate hopes of pulling themselves up by their bootstraps and closing out the season in the safety and sanctity of mid-table mediocrity. Two features make this an easy call: (1) Watford’s form has been light years better than Villa and (2) only one club is still benefiting from the Sam’s Army bump – and shame on me for temporarily doubting it this past weekend.

• Bournemouth 0-2 BRIGHTON – I’ve been pumping the Seagulls’ tires all season but even I have to admit that have been quietly poor recently. This game is a classic decider of the question “are they or aren’t they for real*” (aka solidly mid-table)? I say yes. However, a loss would confirm both that I am a dummy and Brighton’s buttcheeks are gonna be doing a lottttttt of clenching coming down the stretch.

• Palace 1-1 Southampton – Quintessential matchup between anti-fun and fun. Southampton have not only been playing well but they have actually been quite entertaining to watch. Palace has been the complete opposite, slowing games down and making them dreary affairs… with the exception of the ridiculously (and unexpectedly) open game against City this weekend. Something tells me the Eagles are going to retreat back to their former ways and suck today’s game dry of every last bit of joy.

• TOTTENHAM 2-1 Norwich – This game stinks to the high heavens like an indescribably ugly draw… so perhaps this is a purely biased pick but there’s no way Mourinho gets himself fired this quickly, is there? (Unless that means there is so much as an infinitesimally small chance they bring Poch back, hmmmmmmmmmmm….)

• LESTER 2-1 West Ham – WHAT HAPPENED TO THE SNEAKY FOXES?? The answer is actually incredibly simple: they have been without Wilfred Ndidi whose presence in the middle of the field is a KEY to what had been a rock solid defense. No Ndidi = too much party. Unfortunately he is still out for this game, which will make this a nervy game against a West Ham team that has gone from crap to slightly better than crap under David Moyes. The big question marks are the fitness of the Hammies’ Michail Antonio and Felipe Anderson. They both sat out this weekend, so I’m going to assume they either are still out or even if they play are not quite at full strength.

• United 1-1 Burnley – the Red Devils bounce between being in full-blown crisis mode to being a half-inch away from full-blown crisis mode, and after the latest injury to Marcus Rashford that (was perhaps preventable and) will keep him out for a couple months there is no question what their current status is. Thankfully though Ole is at the wheel! 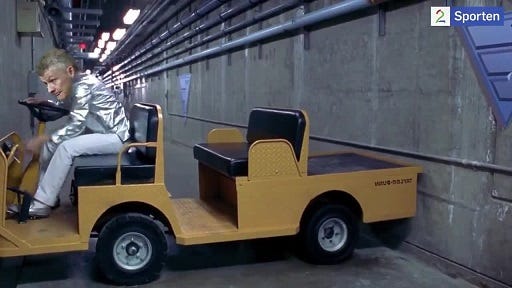 So there we have it. Solid midweek slate of games to help shepherd you through the work week. FA Cup is back this weekend. Hooray! Stay safe out there, kids.