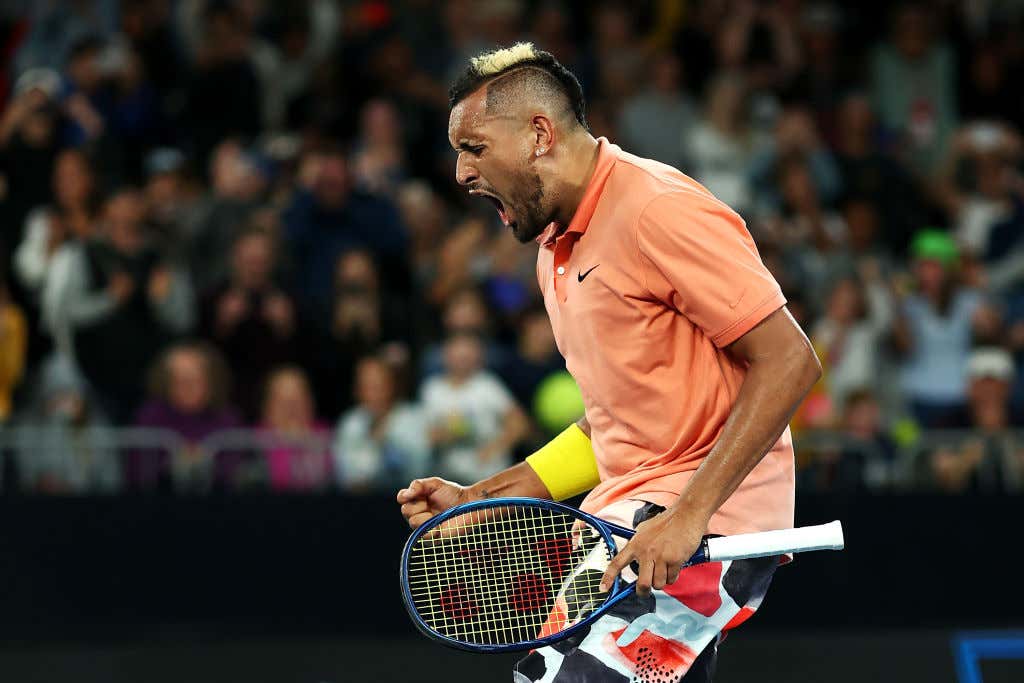 We are officially through the 2nd round of the Aussie Open and things are about to get interesting. The Aussie Open is so much fun to watch because 1) it starts right when you get home from work and goes all night 2) gambling on tennis is the best. Matches start typically around 7:00 or 8:00 eastern time and go until about 5 or 6am. It's awesome.

The biggest names to fall so far have been the Italian Matteo Berrettini and Canada's Denis Shapovalov (one of my favorites). Dominic Thiem got a big scare last night from the Aussie Alex Bolt, but came back from down two sets to one to stave off elimination. For the most part the top players have cruised which only means we're going to be on a collision course for some great matchups coming up.

Kyrgios is Locked In

The player to watch so far has been Nick Kyrgios. I'm a Nick guy through and through and if you can't live with the version of Kyrgios losing his fucking mind sometimes then you don't deserve the Nick we're seeing right now. Mature Nick playing for his country and all those impacted by the bushfires disaster is something to see. He's so locked in.

Next up for Nick is the Russian Karen Khachanov. I expected Kyrgios to cruise passed him which will set up a 4th round mega clash between him and Rafa Nadal. The two publicly do not like each other. During his thrashing of Giles Simon last night he found time to mock Rafa after getting called for a time violation.

That's just Nick being Nick. If that's the biggest Kyrgios "immature" thing we're going to get then that's a breakthrough for him. I'm rooting so hard for him to make a real run here. If the line comes out that Nadal is only -200 or lower against Nick then I'm going to jump on Kyrgios for everything.

Since Andy Roddick retired the American tennis game has been a disaster to watch. John Isner will never win a grand slam. Sure he hits big and can serve like a motherfucker but his return game is a joke and his matches are impossible to watch with the small chances of a decent rally ever happening. Reilly Opelka has a little better of a return game, but is essentially a clone of Isner. He's only 22 so I haven't completely given up on him yet. Taylor Fritz, the 29th seed, has the most promise of anyone who has been around for a little while and last night came back from two sets to love down to take down Kevin Anderson. It was one of the best wins of his career no doubt. He's +250 against Thiem tomorrow night so maybe he can make something happen. I expect him to grab at least a set off the Austrian.

Having said all of that about American tennis, one of the best stories of the tournament has been America's Tommy Paul. I know, two first names is concerning, but he's powering through it. He's got this swag to him that is infectious and I'm quickly becoming a big fan. Paul picked up his first ever grand slam win of his career when he took down Leonardo Mayer in the first round in four sets. That set him up with as a heavy underdog against Baby Fed Grigor Dimitrov, the 16 seed. After going up two sets to the good, Tommy Paul let Grigor back in the match which led to a deciding 10 point tie break that sent the American through to the 3rd round.

He faces Márton Fucsovics tonight for a spot in the 4th round. Fan Duel currently has him as only a +130 dog which tells me he's gaining their respect. I love the American in this match, which will likely start around 8:15 PM just as you're settling in on your couch.

Other picks for tonight

Over 37.5 games in Schwartzman Lajovic

Outlook for the rest of the tournament

Djokovic and Federer are playing at a different level right now. Federer's recent dismantling of Krajinović sent a message that this 38 year old isn't going away just yet. He looks 28 out there. He faces John Millman late tonight and will seek his revenge after the Aussie knocked him out of the 2018 US Open. The heat got to Roger that night and almost made him pass out on the court. I suspect he'll be ready for it tonight. Fed's draw has opened up and he should cruise to the semifinals without trouble where Novak will be waiting. He'll get his rematch from last year's Wimbledon where he had the championship on his racket for multiple match points. Right now Djokovic is +105 to win the whole thing and that's just bad value in my mind considering who he'll have to beat to get there. Federer is +700 and is you factor in his cake walk draw to the semis that's awesome value in my mind. What will he be against Djoker in the semis? +130? +150? And in the finals I would suspect he'd be a favorite. That makes +700 a worth while bet if you're into futures. I think the other side of the bracket is too stacked to lay any money on Nadal or Medvedev. You've got guys like Thiem, Kyrgios, Rublev, and Monfils who could make some noise if they get cooking. Just take Federer and enjoy the ride.

If you're still here reading after all of those words then god bless. I wish the women's side was more wide open but it just isn't. It's Serena vs. everyone else. I don't have a crazy ton to add here other than I think this is finally Serena's time to win another grand slam.  I can't fucking stand her and the thought of her never winning another slam again is fantastic, but I just see her playing right and don't see too much competition. It's really Osaka and that's it (do not fall into the trap of betting Coco Gauff tonight with her juicy odds). She's an awesome story and it's wild to think how good she's going to get, but she's not better than Osaka right now. It's so easy to forget she's 15 years old. That's just fucking insane. I wish she didn't have Osaka in her path tonight and could make a deeper run, but it is what it is.

I don't think Ash Barty has what it takes to beat Serena's power game. If American Amanda Anisimova didn't get bounced in the first round I might have taken a stab at her because I love her game, but she's out after a shocking 3 set loss to Diyas. At +300 I think Serena is a great bet considering the overwhelming odds she's going to be favorited by moving forward. Dammit.

Enjoy the tennis over the next week and a half. It's fun to come home from the bar late on Friday or Saturday and see matches still going on at 1am or 2am. Bet some tennis this weekend, I promise you'll have a blast. Cheers.