BIG time words from this crazy Pastor. I perused(the correct meaning) Rodney Howard-Browne's twitter this morning and if I gleaned anything it's that 1) He loves Jesus almost as much as he loves Trump and 2) he is crazy. Having said, it's interesting thought. Could our Lord and Savior whip the shit out of John Bolton in a fight? Now, I have seen Angels In The Outfield enough to know that when it comes to championships the Lord isn't allowed to use the supernatural to win. Championships have to be decided on their own. Which means Jesus of Nazareth, the Son of God, will be left to use his God-given abilities, but only the shitty human ones. Let's go to the tape 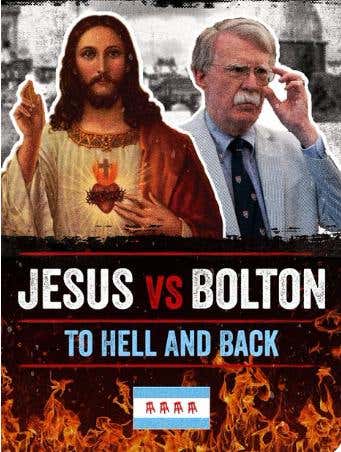 Bolton definitely has that cranky old man strength working in his favor. Lots of experience, but probably not enough. Jesus was locked into a 33 year-old body. Father time is on Jesus's side. He hasn't aged a bit in over 2000 years. Being able lean on both youth and experience works in his favor. Edge: Jesus

When I think of Jesus, I think of that long wiry frame. I mean look how far his arms can stretch 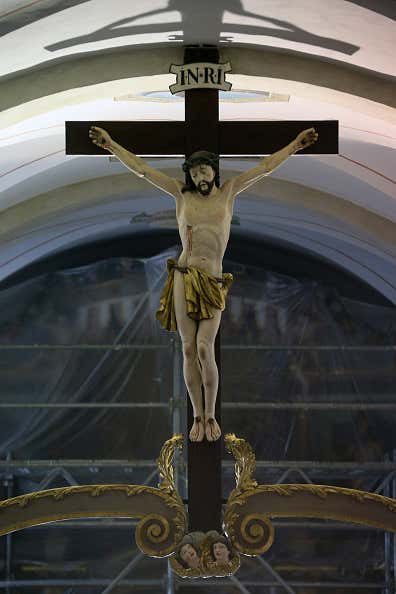 You look at that guy and think that he'd be able to keep Bolton away with a jab, BUT according to "Christian Scholars" Jesus stood between 5'1 and 5'5

(Christianity.com)--Though the Bible doesn’t mention his height, scholars and scientists estimate that Jesus’ height was about 5’1” to 5’5.” This estimate is based on average heights for men during the 1st Century. However, these estimates will never be proven because though Jesus died on the cross, he is alive and has ascended into heaven where he sits at the right hand of God.

A stunning revelation. If you're 5'5 in 2020 you are a social pariah. You're the bagel man. This is a tough look for Jesus. Knowing that he was a midget kind of changes everything for me. I am supposed to believe that God with a capital G made his only son a midget and people actually listened to what he said? If someone is under 6' I just dismiss everything they say. Walking on water? Fine. Healing the sick with a touch? Okay. But telling me someone who was possibly as short as 5'1 was adored and followed by thousands? NOT CREDIBLE. And so when it comes to Jesus vs Bolton...you can't teach height. Edge: Bolton

Jesus preached about turning the other cheek so you know he could take a punch. Also literally came back from the dead. A standing 72 hour count. He can take whatever Bolton can hit him with. John Bolton has been in Washington Edge: Jesus

Not one of the Lord's strengths. Seemed like as soon as the Romans wanted him arrested he was arrested. Bolton on the other hand...the guy avoided the Vietnam War while also being an advocate for the war. That seems tough to do. He's also been in Washington since 1980 and if you read the news it feels like everyone hates his guts. Both parties.Bi-partisan agreement that this guy is an asshole. And yet at 71years-old he's still relevant.

Bolton vs everyone for 20 years

This is a tough one to judge. Neither guy has shown a lot of physical power in their career. Jesus did carry a cross and the weight of every sin ever done by mankind. That's pretty strong. Edge: Jesus

I love Jesus as much as the next guy whose parents used to make him go to mass. I still go to his house twice per year. If Jesus is fighting Bolton, I would be in the Lord's corner with a white robe on right next to John the Baptist. Having said that, we've all met the son of a powerful man before. They typically act their father's success is their own. A little entitles. Like did he earn his nickname "The King of The Jews"? Hard to know for sure. He could be all hype. He does travel with a huge entourage too.

Bolton on the other hand...son of a fireman. Got himself into Yale. He's probably had to fight, scratch, and claw his way up the ladder his entire career.

I think this one goes the distance. A full 12 rounds. When you put it in the judges hands I think that favors Jesus. Nobody wants to take the risk of not scoring close rounds for Jesus. That could have real ramifications for this life and the next. That wiry frame. The youth. The endurance. If Jesus stays off the ropes then Bolton's age will show up in the later rounds. Bolton would sell his soul to the Devil to win this fight, but I am guessing he has already played that card earlier in his life. Jesus, the crowd favorite, by unanimous decision.