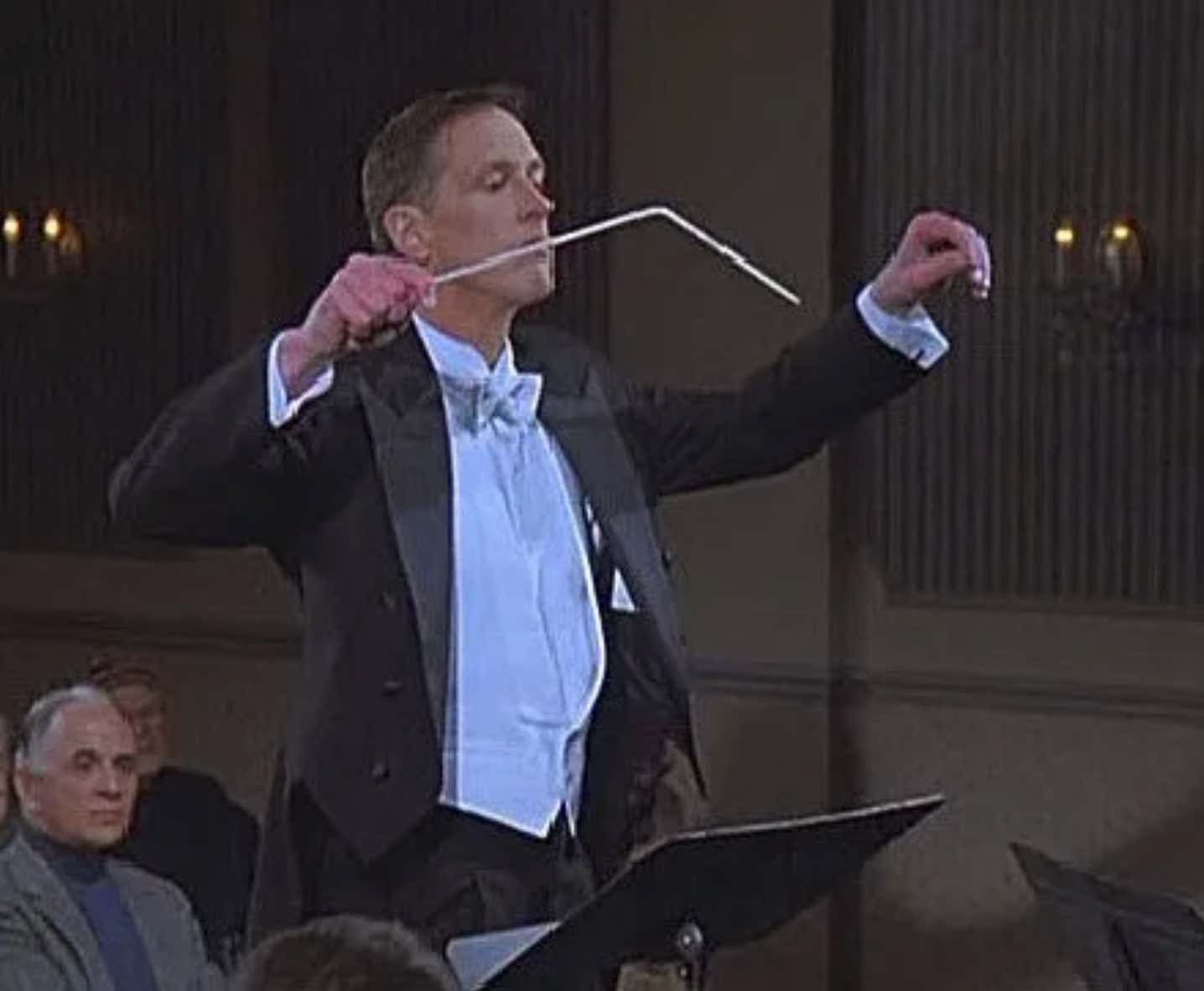 There are very few things I look forward to every year.

And the day the Mad Maestro email hits my inbox.

Everybody knows I'm a huge Super Bowl Prop Bet guy. Sure there are plenty of fun, silly ones every year that I dive into, like passing yards vs, the closing of the NASDAQ, or rushing yards vs. the price per gallon of oil barrels in Saudi Arabia. But the most important bet — the REAL prop bet — the MEAT AND POTATOES prop bet — is the length of the National Anthem.

You know the scene I'm about to describe. You live it every February.

You're at the Super Bowl party. You probably just got there about 20 minutes ago, you're still warming up from outside, haven't even fully purveyed the spread yet to see if there's buffalo chicken dip this year or just spinach artichoke again, still wondering if you'll get a seat on the couch or be stuck on a shitty folding chair in the back, kind of nudging your girlfriend to stop talking and grab a prime spot because you don't really give a shit how somebody's ugly baby is doing but you DO give a shit about not being stuck next to fucking Joe again bragging to you about his portfolio diversity last quarter.

Then the TV screen goes quiet and the announcer's voice comes on instructing people to remove their hats and you sprint up to the front with your iPhone out on stopwatch mode.

All the girls are like, what the fuck?? Who is this loser, what's he doing?? Their lame-ass, ass-kissing, probably woke boyfriends are shaking their heads, I don't know babe, some guys take sports way too seriously, spend so much time watching games they probably haven't even read Between The World and Me by Ta-Nehisi Coates yet, kind of gross frankly, right babe?

But a few of the guys in attendance know. The prop bettors know. They nod at you in solidarity, a small but meaningful gesture letting you know you're not alone, they're on your side, and not only that, they're thankful that you took the lead in being the official timer.

You've established yourself as the king of the prop bettors and once people get a few drinks in them they'll migrate over and start talking to you about what you have, how much money you put down, they'll quietly fist pump with you when Al Michaels mentions the name Donald Trump or Alex Rodriguez is shown in the crowd more than 0.5 times.

But for now, it's all eyes on the anthem, and there's nothing that makes you feel more alive than the tense moments as "home of the brave" hits and you wait for the last note to end as time winds down.

Incredible. What a rush.

This year: we've got Demi Lovato.  Now long time readers know I used to spend a ton of time on this one on my own, breaking down and analyzing Youtube video after Youtube video of past performances, tendencies, attitude, stage presence. I'd deconstruct them psychologically - what point of their life are they at?? Are they trying to announce "I'M BACK" or are they happy to be on the tail end of their career?? How patriotic are they?? Do they really want to sell it or do they just want to do a respectful rendition and get off the field?? How much of an attention whore are they?? How badly do they want to stay in the spotlight for as long as possible?

But long time readers also know that, like a gift from the Gods, a National Anthem king swooped down from the clouds and entered our lives.

Who is he and where did he come from?

In 2014, back when the comment section was thriving, a user named "MadMaestro" left a lonnnngggggg analysis of the National Anthem. He then reached out to me personally via email. In his own words:

I have a major passion for classical music. I've been a classical instrumentalist for 15 years. A degree from the New England Conservatory and the Peabody Conservatory of JHU. Gigged with dozens of ensembles all over the east coast and even worked in administration with the Boston Symphony and Baltimore Symphony. Currently I live in Michigan, teaching, freelancing and I do Development Consulting for Non-profit Arts organizations. I have plenty of Operas under my belt. Both as a performer and as a spectator. Classical music is more than how I make my living, it is my life.

The singer that year was opera singer Renee Flemming, so his knowledge made sense. And he nailed it.

But it turns out he didn't just know classical music - he knows MUSIC. He has emailed every year since, nailing the over/under each time (except for one hiccup).

He was a late response one year and his feedback actually made me CHANGE my initial pick, and it was a winner. I am forever indebted.

So it would be dumb for me to even try anymore when I have this invaluable resource at my disposal. I shot him a message asking for his advice. He replied that he was finishing up a brass band tour and could get it to me tomorrow evening. Perfect. I'd expect nothing less Maestro.

So now, without further ado, is the Mad Maestro's official take.

Every Super Bowl, the National Anthem prop bet is a fiasco. It's positively woeful to scavenge for clues, research the singer and calculate the performance duration, only to have Vegas make silly rules and the oddsmakers change the line. There's a lack of consistency and consensus about what the final result ends up being. For example, the bet rules declare the end of the song to be at the conclusion of the word "brave" the first time. While this might be good for Vegas, it is an entirely "amusical" decision. When Lady Gaga and Gladys Knight performed their Super Bowls, Vegas said they "completed" their performance, while everyone with functioning ears was still listening to an extended finale. And every year that occurs, there's a 15 second dispute over the final times. In music theory, this can be referred to as an altered deceptive cadence. We are all familiar with this kind of cadence. Anyone who has played the original Super Mario Bros, jumped the flag pole and entered the castle at the end of the level, has heard this flat VI, flat VII, I chord cadence many a time. Oddsmakers probably love it because it generates a huge wild card for the bet and everyone's grief grows exponentially as a result. # altereddeceptivecadencesmattertoo

And so, once again, I've taken two musicological approaches toward calculating Demi's performance duration. Theoretical and historical. How she sings, and why she sings.

Unlike most Super Bowl anthem singers, there are numerous examples of Demi performing the anthem at major sporting events. That's great data to collect, but that will only get you part of the way there. The most important factor is, and has always been, whether or not the performance is accompanied, or a cappella. An accompanist, back up band, or a prerecorded ensemble can pollute the entire prediction process. Although I've found no announcement detailing her upcoming performance, all of her previous performances were a cappella. She is going up there with a mic, and that's it.

Hellz yes. As it should be.

Demi has complete control and is beholden to nothing. If it turns out she is singing along with another bull shit midi orchestra recording, it might kill me. That's how Pink's anthem performance resulted in me developing a heart murmur.

Demi's interpretation of the anthem has become more refined and consistent over time. She was a teenager the first time she did it in 2008. You can hear several phrases that she has reworked in later versions that show real signs of maturity and confidence. She also sings the anthem in the key of G or A flat major. This is an excellent practice. This might sound absurd, but there is an organized campaign to establish "G major" as the official key of our national anthem. The argument being that the Star Spangled Banner is possibly the most difficult anthem of all to sing (for your average citizen) because of its high range. G major is the Goldilocks zone. That means, the extraordinary vocal demands of our anthem will be a knotch or two easier to handle when sung in this key.

And all this adds up to support her style. I would sum it up with one word, "intimacy." She invites the crowd to be part of her performance and favors a very rubato style using a hybrid of 3/4 and 4/4 time signatures. But what is Demi's biggest "X" factor for this song? Her pauses. That right there, is how she gives power to the music. The sublime melody and lyrics transformed into majestic mountains, traversed only by taking ample time to catch your breath. This observation has become more and more apparent as she has grown older.

Finally, I graphed the "average" tempo she began singing the anthem. She bends the time with every phrase, however, there appears to be a micro-trend of Demi taking the anthem tempo, slower each time.

With everything in consideration, there is a single critical moment that will be the life or death of this prop bet. Will Demi Lovato take a breath/pause before she sings the final lyric, "Brave"?

If you play in MY orchestra, then the answer is "NEVER." But if you're Demi Lovato, the answer is "I DO NOW." She seems to have evolved into that interpretation. If she takes the big dramatic pause for a breath, Demi will have a full tank of gas to combine her reverb with the Thunderbirds.

Conclusion: When all is said and done, I conclude Demi Lovato's will be working off of her last anthem performance. Noticeable pauses, molasses like tempo, and raw emotion. She's coming off an extremely emotional Grammy performance, and she'll be bringing that with her to Miami. Including the rehabilitation and redemption that comes from a Hollywood overdose. Therefore, I believe this will be longer than her Youtube average.

I have Demi Lovato needing 122 seconds to sing the Star Spangled Banner. Take the lowest OVER you can find.

Lovato acknowledges and responds to the audience reaction while she sings. If you're at the game on Sunday, cheer like hell, Demi will use that energy and turn it into $$$.

I also recommend asking Brent Musburger about this. He also claims to have an inside man scouting the Saturday Super Bowl rehearsal… Fiasco.