First off, if you haven't gone to http://predictit.org/promo/Barstool20 to get your first $20 matched in the stock market of politics so you can bet on primary elections this year (over 50 of em), you're nuts! Go do it. It's gonna be fun to bet on all these elections, and the first one settles this Monday, February 3!

Next, I got the feedback last time that still nobody understands the PredictIt odds…

Hopefully it will make sense this time around (if not, I'm just gonna try again later). Just think of every PredictIt Election Market as a “Future” bet - For example: “Who’s going to win the NFC East?” - except instead of the Cowboys, R-Words, Giants, and Eagles, you’ve got candidates who might win the upcoming election.

USE THIS CONVERTER TO TRANSLATE THE ODDS (SHOUTOUT INTERN CAM): 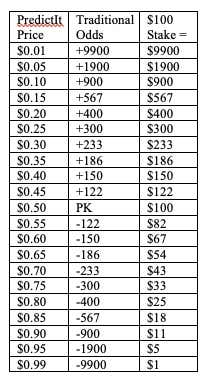 So, from now on when we’re looking at election markets, I will list the Vegas Odd Equivalent next to the PredictIt Stock Price like this (Current odds for the overall D Nomination to face Trump as of 10 AM Pacific 2/1):

Since PredictIt is a "Market" there is also the opportunity to "Fade" each of these candidates by taking the "No" option. Those odds right now look like this:

I'm tempted to fade a surging Bloomberg right now at about -400, but I'm too much of a pussy to bet on heavy favorites usually, and I don't believe in betting every market, BUT fading a guy in third place who refuses to do any debates is probably a good idea to me… although… boomers are constantly warning "look out for Bloomberg", so who knows".

Anyway, the only position I'm holding in this market is "Yes" Bernie, but I got him back at 18¢/+400, before he became the favorite. Obviously you'd like to have that price too if you don't have it already, so you should listen to Hard Factor News to hear our picks on a daily basis. 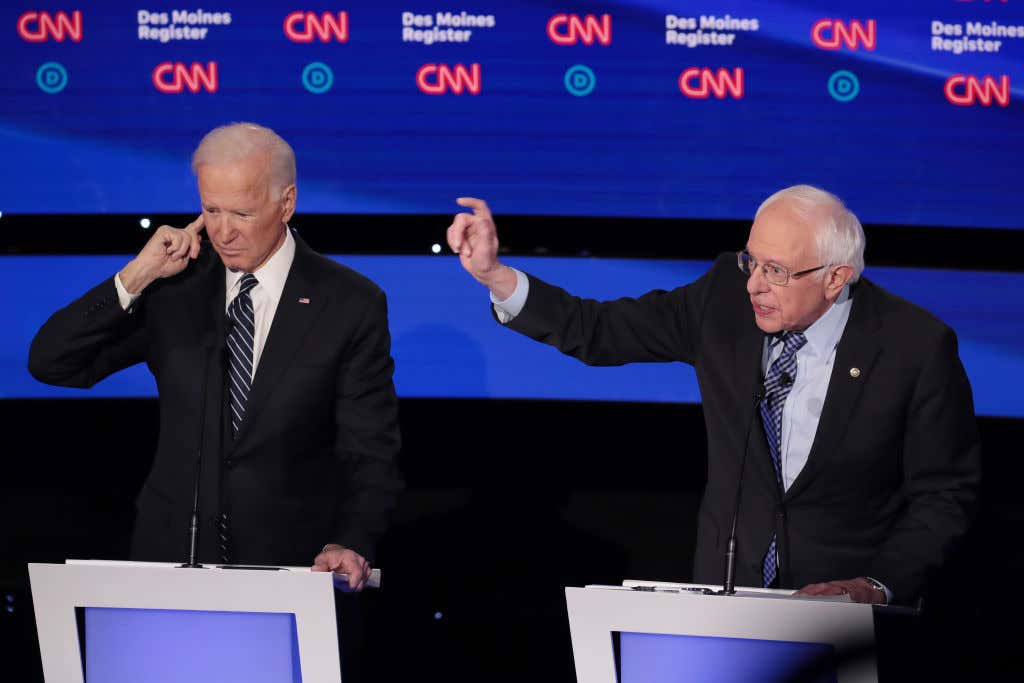 That being said, the two guys who are somehow older than Trump but still the favorites, Bernie and Biden, are both still better than a double-up right now in the overall nomination market… BUT if you're not in that market yet, I'd wait and see what happens in Iowa on Monday first.

After just being in Iowa earlier this week and getting to talk to some caucus-goers, Liz and Pete could both be under-valued here, but the way the Iowa caucus works is that if neither of them get over 15% in the first round, all their supporters will have to then go support either Bernie or Biden who will surely both get above the 15% threshold. So my gut says "fade Biden" but since it's a caucus, and he's in the top 2 that's an idea that could easily backfire. My pick: Bernie, but I'm not betting it because I'm cash-poor at the moment, and I like other markets better, like New Hampshire…

This one, if you've been following this blog series, should be a feel good moment for you.

I bought this market at 51¢, gave the tip in this blog and on the pod when it was still at 57¢, and it's looking like Bernie will dominate in New Hampshire again, just like he did in 2016. My Pick: Bernie, book it.

This one is really looking to be down to the two favorites at this point, although Steyer and Warren also have good ground operations here in the Silver State. This is one where I've been saying all along that Biden is my pick in NV because he's raising the most money locally, and he's always had about a 10 point lead on Bernie in the polls here since I've been tracking… so by that logic, if I were going to make any plays here it would be Yes on Biden at +250, but I'm going to wait and see how Iowa plays out before making that call.

South Carolina votes on Saturday January 29, and Biden should win that unless he's dropped out the race, or Bernie has grabbed such momentum that he's the run-away nominee… And it's still too early to tell on that.

Be on the lookout for a video coming out from our recent trip to Iowa to find out why they caucus first in the presidential election process. Let's go Bernie in the first 2 states if you're betting these picks, but remember, President Trump is still trading at under 50¢ on a repeat… he's still a double-up, and that a nice value too.

Don't forget, go to http://predictit.org/promo/Barstool20 to get your first $20 matched in the stock market of politics so you can bet on primary elections this year.