Sooooo...yesterday was something. If you weren't following me or Paul Lo Duca closely you might have missed a hell of a gambling day. We began the day driving to the casino and grabbing breakfast inside "The Eatery" at Penn National. That's a spot that has a pizza place, a generic American burger and fried chicken spot and a breakfast place named Joe & Dough. We each had a breakfast sandwich which was not quite diner quality, but definitively better than a lot of fast food sandwiches. Paul, being the curious soul he is, also opted to try something called a bombolino. Apparently a bombolino is a donut without a hole, covered in sugar and served with custard. He was pleased both by the taste and the value.

After breakfast we went upstairs to the Sportsbook and decided to handicap some races. We decided we would each put $200 in for the day and split our tickets. Early on we played a Pick Five at Laurel Park and a Pick Five at Gulfstream.

This is where things got interesting. We decided to go big on Aqueduct and even bigger on Gulfstream's Late Pick Five. Now, you have to understand that we have not had good luck at Gulfstream lately. The track has beguiled us. Yet we went ahead and played a $280 Pick Five ticket to accompany our $144 Aqueduct ticket. We had most of our money in play at this point. 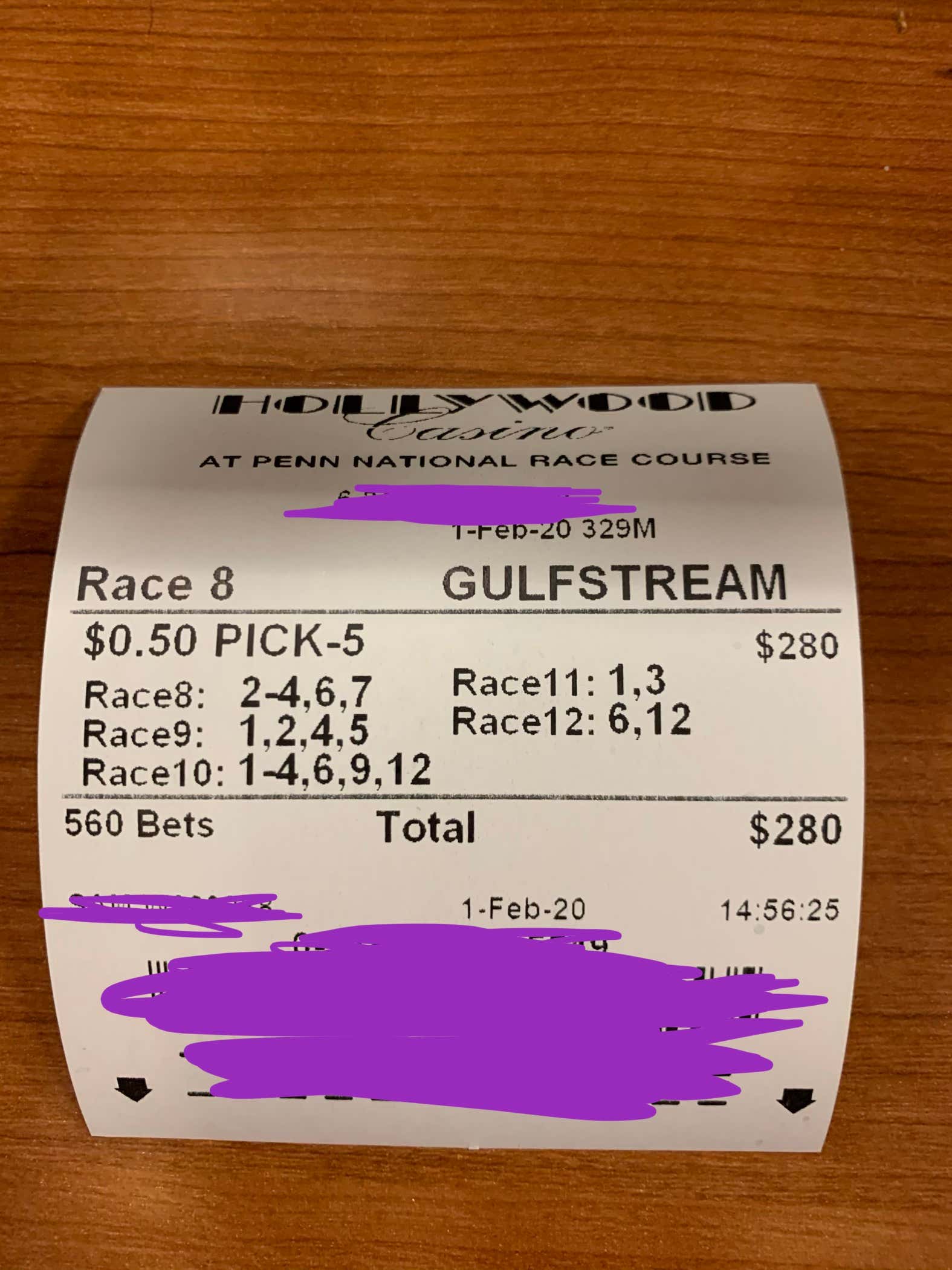 The Aqueduct races started first and we had a very successful first two races before staring down our single in the third leg. We had Rudy Rodriguez training and Luis Saez riding. We felt good. They broke from the gate clean and unfortunately a speed duel ensued. Our single got worn out and ultimately couldn’t get the job done. We lamented the win that could have been. It could have been maybe $2,000, we thought. All the while Gulfstream was happening. As each race passed by, the results got better and better. 7-1 in the first. 9-2 in the second. Another winner in the third leg. A 12-1 shot in the fourth leg. Then the fifth. We only took two horses in the last leg. The race was originally a turf race and was taken off. This could go any which way. We thought about hedging, but ultimately decided against. We would ride out the $280 ticket for a potential windfall of thousands.

We stood side by side in the Sportsbook watching the twelfth race in South Florida and as the 6 horse pulled away we rejoiced. We had won over $4300 on a Pick Five. We were elated. We cashed our ticket, pocketed our money and went downstairs for dinner.

Well before we went downstairs we also played a Santa Anita late Pick Five and the early Pick Four at Penn National.

After placing our next bets we went downstairs to Final Cut where we met our #CasinoDad, Dan Ihm, the Vice President of Penn National. We proceeded to have an amazing dinner consisting of bacon and gnocchi appetizers, salmon and cucumber amuse bouche, and steak entrees. The food was spectacular. The company even better. Final Cut is a top notch steakhouse inside Penn National.

After dinner we walked outside to the track where we had photos taken in the Winners' Circle after the 5th race and the track announced our visit to the cheers of the audience. During this segue, we also found out we won the Pick Five at Santa Anita for over $320. The winning just wouldn't stop.

We went back inside to the Mountainview bar which has a panoramic view of the racetrack to watch the late Pick Four at Penn. Of course, this also hit, cashing for over $177. We got some fun photos along the way as well.

We wrapped up the night with some cocktails at the Final Cut bar and hitting a $34 daily double at Sam Houston. Overall this was an amazing day of horse racing. We cashed for nearly $6,000 yesterday and are back at it today. Also, we are having a Super Bowl party at Penn National beginning around 5pm at the H Lounge. If you're anywhere near us, come and hangout and watch the game, we'd love to have you.