We've got plenty of markets to gamble on tonight for the New Hampshire Democratic Presidential Debate. Go to PredictIt.org/Promo/Barstool20 to get your first $20 matched on us in the stock market of politics. Here is the info on tonight's broadcast:

And one very last thing before we jump right into the debate betting markets... THANKS FOR NOTHING IOWA DNC!!! They still haven't called the Iowa race between Bernie and Pete (looking like Mayor Pete has it by a cunt hair unless Bernie requests a recount), and it was one of the most colossal meltdowns of an American election in recent memory. Get your shit together DNC.

OK, on to the matter at hand, even thought we don't "technically" know who won in Iowa, it was a basically a tie between Mayor Pete and Bernie, who will be joined by 5 other candidates on tonight's stage for the the debate in Manchester, New Hampshire (listed left to right on stage): Entrepreneur Andrew Yang, Former South Bend, Indiana, Mayor Pete Buttigieg, Vermont Sen. Bernie Sanders, Former Vice President Joe Biden, Massachusetts Sen. Elizabeth Warren, Minnesota Sen. Amy Klobuchar, Businessman Tom Steyer.

MOST SPEAKING TIME: (odds listed about 8:30 AM Pacific February 7)

What I'm betting: "NO" on Mayor Pete for 70 cents/-230. I don't think Pete has ever spoken the most, but he's the favorite here against Warren and Sanders who both NEED to do well in New Hampshire, so I'm fading him. 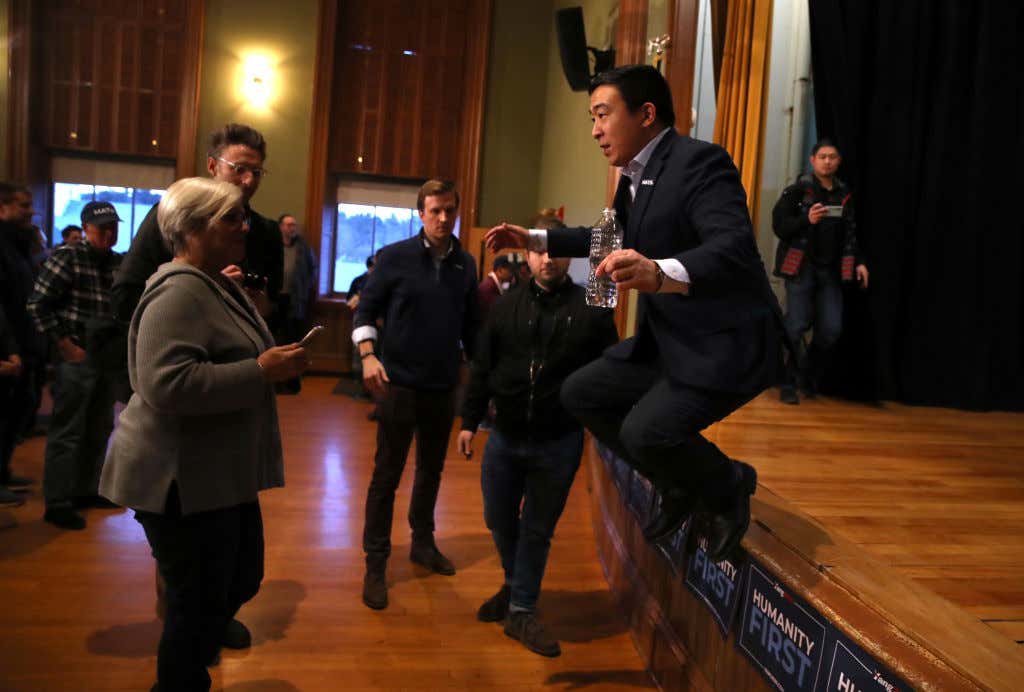 ANDREW YANG @ 62/-170 cents is the play. He's like the human incarnation of High-Intensity Interval Training - get's all his warnings about Sky-net and talk about the "freedom dividend" done real quick.

The only other 2 that could conceivably speak less are Steyer and Klobuchar, but they both talk significantly more during debates (historically) than Andrew Yang.

How many candidates will say Millionaire or Billionaire? I like 3-4 here (both trading at +400 or better)

How many candidates will say the word Healthcare? I have no idea, so I'm going "No" on all 7 saying it at about -200

That's it for tonight's wagers… But of course, I'm still riding on Bernie repeating in the New Hampshire primary, even if Mayor Pete is making a whole lotta noise in this Iowa caucus.

DON'T FORGET to Subscribe to Hard Factor from the Barstool News Network to get daily picks, and political gambling analysis. Also, DEFINITELY don't forget to get your first $20 matched in the stock market of politics at PredictIt.org/Promo/Barstool20.