I wanted to take a moment to talk about Seton Hall. What Kevin Willard is doing this year is nothing short of a miracle. Mostly because Seton Hall hasn't really been here before. When you think of Seton Hall, you do typically think of 'they have to be a decent program.' They aren't. They made the 1989 title game losing to Michigan and outside of that? They made one more Elite Eight in 1991. They've only made 4 Sweet 16's in the history of the program. They've 13 total Tournaments - 4 of which came in the last 4 years. Hell, they've only won 2 conference titles.

Now, to quote Paul Rudd, look at us. 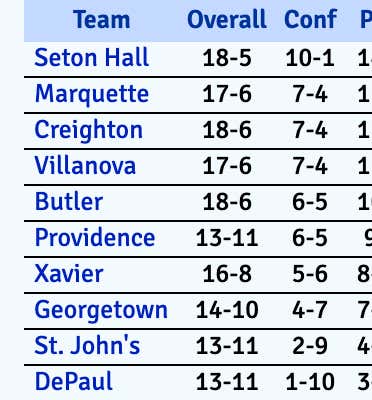 A 3-game lead in the Big East - to me the best conference in America because there's no a bad team like we see everywhere else. Not only that, what makes it the 'near miracle' part - that's how you reel people in with a headline - is it's rare to see a team make a jump from a 7 seed to THIS without really gaining a major player. Yes, Seton Hall added a couple nice pieces, but there's no Anthony Davis, Zion, etc.

So how did we get here?

It actually started with an injury. Sandro Mamukelalshivli was the 2nd leading scorer and 2nd best player for Seton Hall and then missed 8 games. That was weirdly the best thing to happen to Seton Hall. Why? They completely changed their look. They ran more of a 4-out, 1-in lineup with Romaro Gill in the center and surrounding him with Myles Powell, Quincy McKnight, Jared Rhoden and Myles Cale. That completely opened up the offense for Powell to take advantage of an open lane and shots. It let guys attack off the bounce. During that stretch they beat the likes of Maryland, Marquette and Butler.

Somehow you can still get Seton Hall 20/1 to win it all according to our friends at Penn National. You're insane not to take them. I think Seton Hall is one of the 5 best teams in the country right now. They are a near lock to win the Big East regular season, considering their wins are already at Nova and Butler.

This team is deep as shit. The addition of Tyrese Samuel adds to this. But, here's the thing. They can now matchup with anyone in the country. We saw them jump out to a big lead over Nova starting with Romaro Gill. Nova then attacked Gill and got him in foul trouble before Mamu stepped up. They can run big with Mamu and Gill. They can go small with just Mamu.

Long story short: put a future bet on them.