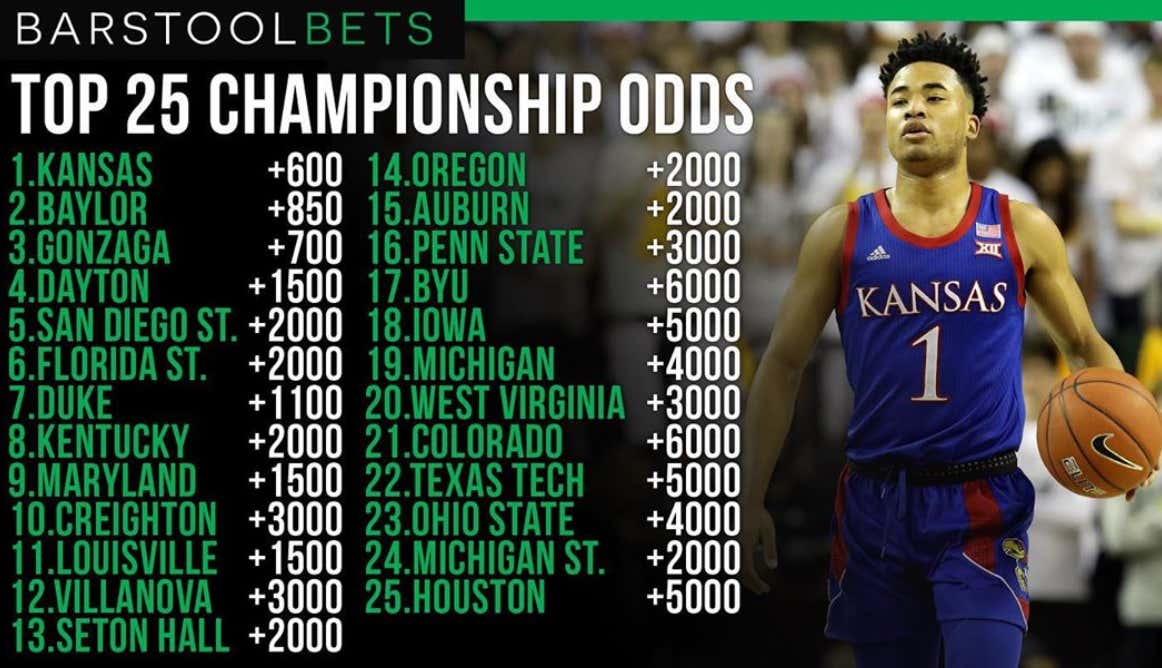 We are just a few days away from March. We have just a few regular season games left. All of that means it's time to get back into some futures bets before we see a bracket - which, obviously, is quite important this year. This season, perhaps more than ever, will matchups be important in the NCAA Tournament. There are way less teams that are matchup proof this year than others.

What do you want out of a futures bet now?

A winner, duh. The main thing here is looking at who you can actually imagine winning a title. It's different than earlier blogs where you're looking for value and willing to take more stabs in the dark. In case you missed those here are the blogs I wrote preseason and in December:

Now that said, you still want to take value. I obviously love having KU at 12/1 and would hate having to take them 6/1. On the flip side I wish I waited to take Kentucky at 20/1 which is a goddamn steal vs the 7/1 odds. Remember you want to have hedge opportunities during the NCAA Tournament if you're someone who prefers to hedge.

So if you're jumping in late, want to add more bets to what you have, whatever, here's what I like. Note I'm going to stay put with what I already have. I'm covered, have value and like where I'm currently at. That said we'll run through the majority of these top-25 teams and what to do here.

Favorites that are too short for my liking:

Kansas (+600) - There's no doubt they are the favorite as of this second. It makes sense. They have Devon Dotson and Udoka Azubuike, both of whom are potential All-Americans. More importantly, they have Marcus Garrett as a second playmaker and Self has moved to surrounding 4 guards/wings around Udoka more often than not. That said, the way this year is going and in a 1-game scenario? No thank you for 6/1.

Gonzaga (+700)/Baylor (+850) - Again, similar line of thinking here as Kansas. I just don't want to touch a team less than 10/1 after seeing how this year has played out. Both of these teams have been consistent, no doubt about it, but they have glaring weaknesses at the same time. I'd prefer not to deal with that under 10/1.

Fades - pretty simple here. These are teams I want nothing to do and just don't see them winning a title. Different than short pricing fades for me.

Duke (+1100) - No thank you at all. Tre Jones and Vernon Carey are both fine. But I don't trust this team who doesn't have a consistent third guy. Coach K still hasn't really figured out a rotation and seems to be switching based on games. I don't trust a team that isn't clicking at this time of the year and in fact is going the other way.

Maryland (+1500) - They are getting closer for me to be out of the fade category. But I'm firmly on team fade Mark Turgeon. I also simply don't trust Anthony Cowan for 6 games in March. That's what it comes down to for me. They also have a serious problem with a consistent 3rd guy like Duke.

West Virginia (+3000) - Bigs are playing well but their guard play is beyond atrocious. Pretty important in March. HEAVY fade here.

Texas Tech (+5000) - The offense is just way too inconsistent. I love Chris Beard, but even at a longshot I just don't think it's worth wasting any money on.

Kentucky (+2000) - Say what you want but them at +2000 makes no sense. They are one of the hottest teams in the country. They have 2 guys in Nick Richards and Immanuel Quickley who are potential All-Americans. It's rare you'll get a Kentucky team at this price, especially one in the top-10, so I'd jump on that.

Michigan (+4000) - Michigan is wildly undervalued ASSUMING everyone stays healthy. That's the key for this team. When Isaiah Livers plays, Michigan is a top-10/15 team in the country without really any debate. He's their best shooter and defender. Being able to put Zavier Simpson in high ball screens surrounded by shooters, completely changes everything. Pending how they finish up, they seem to be the high major team that will be underseeded because of that Livers injury.

Oregon (+2000) - Every year we start to talk about who can pull a Kemba/Shabazz. The key to remember this is they each had someone with them. Kemba had Shabazz, Shabazz had Boatright. There needs to be someone else that can get buckets. Payton Pritchard can be the Kemba/Shabazz and he has help, most notably in Chris Duarte who can just shoot the hell out of the ball. They always seem to find a way to win a couple games in the NCAA Tournament too. I'd like to see if those odds can get up to 25/1, but I'd shoot at them at 20/1.

Florida State (+2000) - Leonard Hamilton might be the most underrated coach in America who we talk about being underrated every year. If they didn't have that weird loss on the first night of the season at Pitt, we'd be talking about them potentially as a No. 1 seed. They are 24-4. They just swept Louisville. They are consistent on offense (top-35 in the country). While they don't shoot a ton of threes, they are actually a good shooting team. Of course they are a great defense too. For a team that is likely going to end up on the 2 seed line, I'd be thrilled with them at 20/1.