After a TON of buildup and a predictably mediocre undercard, Deontay Wilder and Tyson Fury finally squared off for the first time since they fought to a frustrating DRAW 15 months ago.

Pre-fight, Wilder was all business in the locker room... Stretching, wrapping his hands, and raring to go at least an hour before they would have to walk through the tunnel into the MGM Arena.

Fury, on the other hand, was busy dancing and trying on costume crowns when it seemed like he should've been doing something a little more "fight related."

There was an interesting ceremony right before the fight started where three former heavyweight champs were brought up into the ring and given some sort of medals.

The three honorees are probably recognizable to everyone, but for those who do not know any of these three gentlemen... 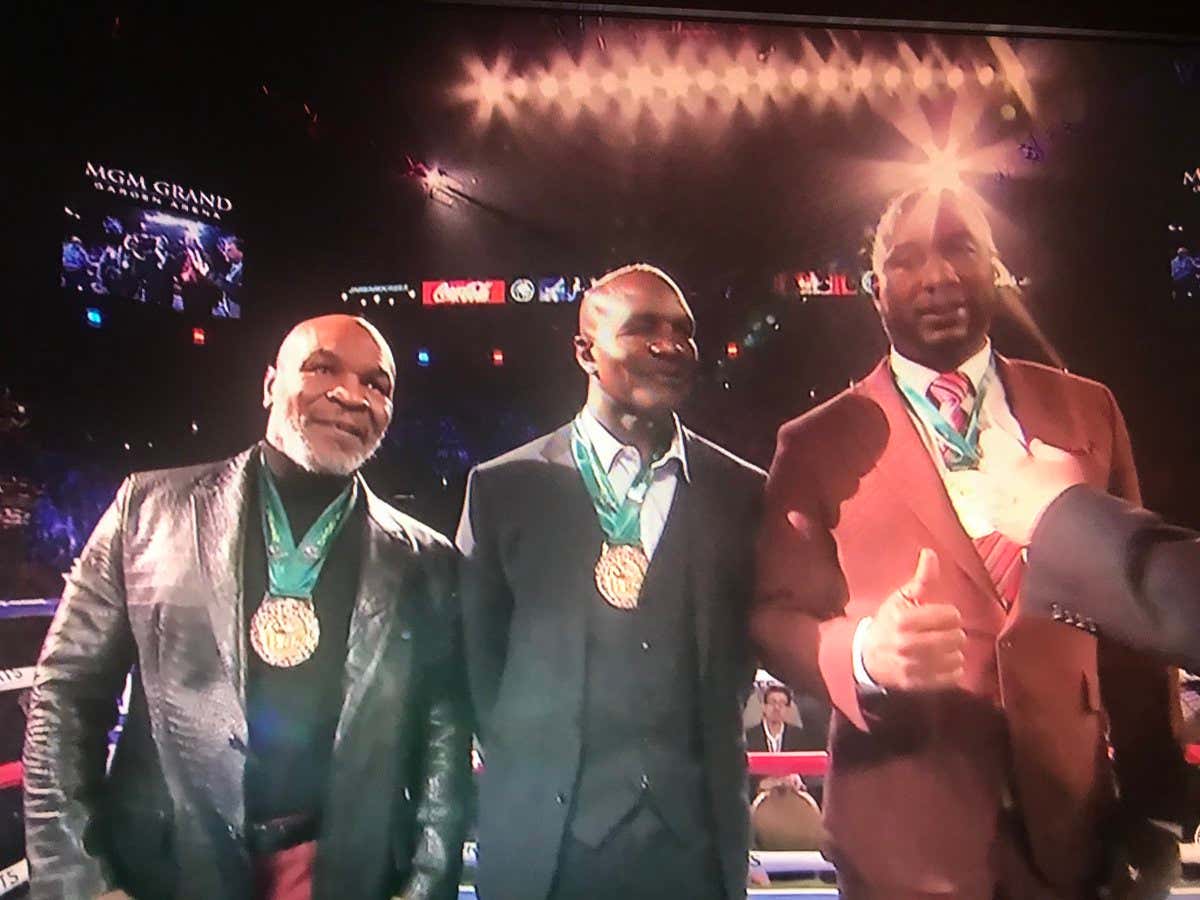 ... the short fellow on the far left bit part of an ear off of the guy in the middle and also threatened to eat the children of the tall bloke on the far right.

Gavin Degraw sang the National Anthem because everyone else was busy, apparently.  He murdered it... And not in a bad-meaning-good way.  I mean in a not-proud-to-own-his-first-album way.

Fury walking out to Patsy Cline's sleep-inducing classic hit "Crazy" while sitting on a throne carried by a handful of scantily-clad Amazonian women was the understated entrance we would expect from the Gypsy King.

Deontay's typical mask-wearing persona seemed tame in comparison.  And the mask itself looked like it was on loan from ABC's surprise hit, The Masked Singer.

"When I get done with Fury, I'll finally get those pesky Mutant Ninja Turtles."

As soon as the opening bell rang, Fury brought the pressure.  The way he basically leaned on Deontay in every clinch and never let the Bronze Bomber set his feet made Wilder equal parts frustrated and exhausted.

Wilder was visibly gassed after Round 3 and stumbled around the ring with blood trickling from his left ear while totally forgetting to throw his signature right hand.

Fury absolutely bullied Wilder throughout the bout.  I saw at least 5 headlocks and then watched as Tyson licked Wilder's blood-soaked face during a clinch in the final seconds of the 6th round.

Deontay wobbled through every round, similar to Joshua in that first Ruiz fight, and I will be shocked if we don't learn that Wilder suffered some sort of inner ear damage.

The ref stepped in and stopped the fight in the 7th round as Deontay's corner threw in the towel, and I don't think there is an argument against the stoppage.

That was total domination by Tyson Fury who promised he was going to attack Deontay Wilder, and that's exactly what he did.

Too soon to guess what's next for either fighter because Fury is still in the ring singing all 17 verses of "American Pie".

Tyson Fury is the WBC Heavyweight Champion of the World, and I lost a little money.